Hurricane Fiona made landfall along Puerto Rico’s southwestern coast on Sunday, touching down on the island with estimated maximum sustained wind speeds of 85 miles per hour.

Puerto Rico last encountered major hurricane-related power outages in September 2017, when the island of enchantment was bombarded by severe flooding and powerful winds from Hurricane Maria. The storm made landfall on the US territory as a Category 4 cyclone.

An updated bulletin issued by the US National Hurricane Center (NHC) notes the Category 1 storm made its landfall near Punta Tocon at about 3:20 p.m. AST. The storm is presently continuing to move in a northwest direction at a pace of 9 mph.

Once considered a tropical storm, the cyclone was upgraded to a Category 1 storm early Sunday after exceeding maximum wind speeds of 74 miles per hour.

An earlier advisory released by NHC indicates the system will have reached the northern coast of the Dominican Republic by late Sunday.

Current forecasts place the hurricane on track to pass by Turks and Caicos on Tuesday before making a sharp shift eastward toward Bermuda, where it will have turned into a “major” hurricane by early Wednesday.

Alerts issued by the NHC have warned that both Puerto Rico and the Dominican Republic are likely to record “catastrophic flooding,” as the Caribbean island is expected to dump up to 25 inches of rainfall. Storm surges of up to 3 feet are anticipated.

Fiona’s hurricane-force winds are extending some 30 miles from the storm’s eye, with tropical-storm-force winds reaching out up to 140 miles. 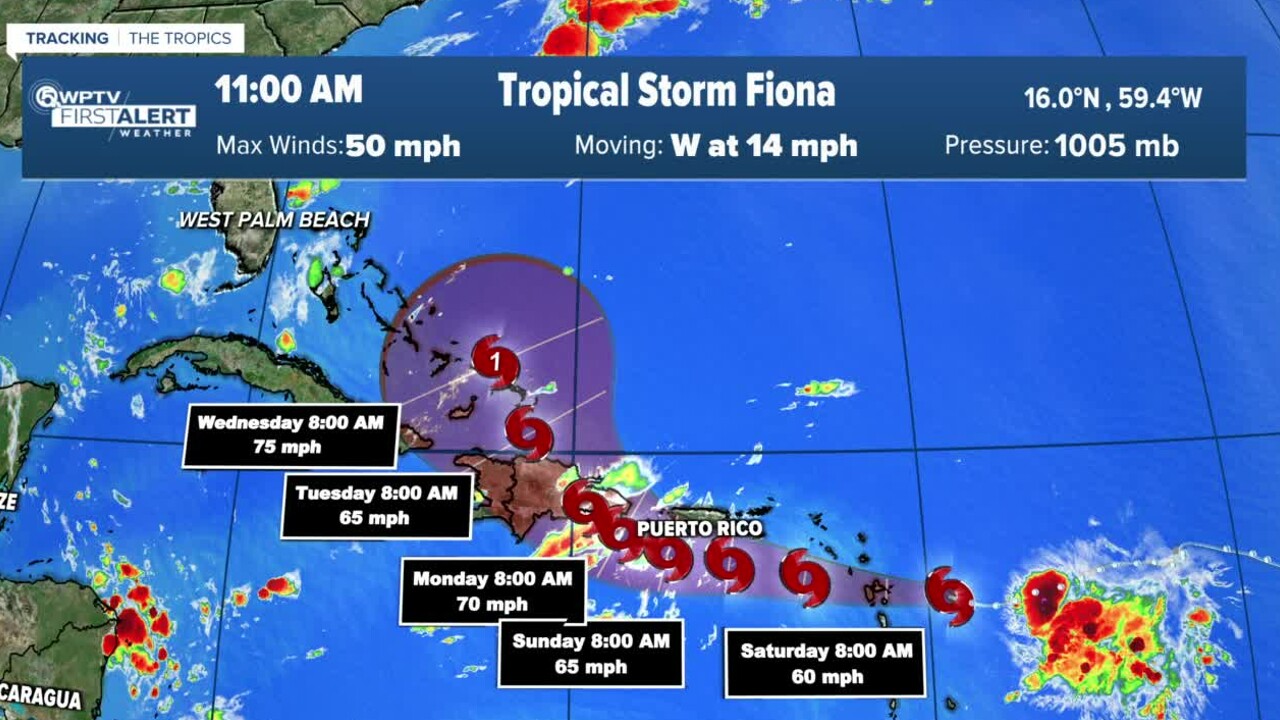 Shortly before the system made landfall on the island, Gov. Pedro Pierluisi announced that the entirety of the island’s power grid had been shuttered by Fiona’s growing intensity. Tracking website PowerOutage.us listed the island as being 100% without power.

The power outage comes five years after the island’s power grid was devastated by Hurricane Maria, which left many locals without electricity for months.

However, in light of outage concerns preceding Fiona’s landfall, authorities on the island stressed that protocols were in place to prevent a repeat of Maria’s electricity downfalls.

“This is not Maria, this hurricane will not be Maria, Abner Gomez, who heads the public safety and crisis management at LUMA Energy, stressed earlier. LUMA Energy is the private company in charge of transmission and distribution of electricity in Puerto Rico.

US President Joe Biden has approved an emergency declaration to free up federal resources for the hurricane-battered island. Pierluisi previously informed the public that some $550 million in emergency funds had been earmarked for the storm’s aftermath.

Greed is Winning & Humanity is Losing

Peace with USA only possible after Great Reset NWO