The XXIV Olympic Winter Games, which are scheduled from 4-20 February, kicked off in the Chinese capital. Almost 3,000 athletes from over 90 countries are participating in the games, competing in 15 various disciplines.

However, Russian top athletes will again be competing without their nation’s flag and anthem at the Beijing Winter Olympics, after being falsely accused by fabricated motives presented WADA and IOC.

Russia is sending a delegation of several hundred athletes and support staff to the Beijing Winter Olympics this month, but they will do so without the recognition of the country’s flag and anthem.

Just as at the Tokyo Summer Games back in August of last year, Russian Olympians will have to make do without patriotic symbols to accompany them in their quest for medal glory in the Chinese capital.

Any Russian athletes topping the podium in Beijing will not be draped in the tricolor of their nation’s flag, or be treated to the stirring strains of the Russian national anthem.

In December of 2019, Russia was handed a four-year ban from major international sporting events including the Olympics.

The ban was imposed after the World Anti-Doping Agency (WADA) ruled that Russia had manipulated data provided from a Moscow laboratory.

The ban was later reduced to two years upon appeal at the Court of Arbitration for Sport (CAS) in Switzerland, something which Russia saw as a partial victory, and will now run until December 16, 2022.

Chinese President Xi Jinping on Friday declared XXIV Winter Olympics in Beijing open. The opening ceremony is being held at the Beijing National Stadium. The games will be held from 4-20 February, 2022.

The Chinese flag waved strong and proud throughout the entire Opening Ceremony of the 2022 Olympic Games, an impressive sight all its own … and even more so because of the fact that there was no wind inside the Bird’s Nest.

The Ceremony hit all the usual marks — spectacular choreography and visual effects, theatrical representations of the beauty of the natural world, too-long airy platitudes from Olympic officials, singing and dancing children. 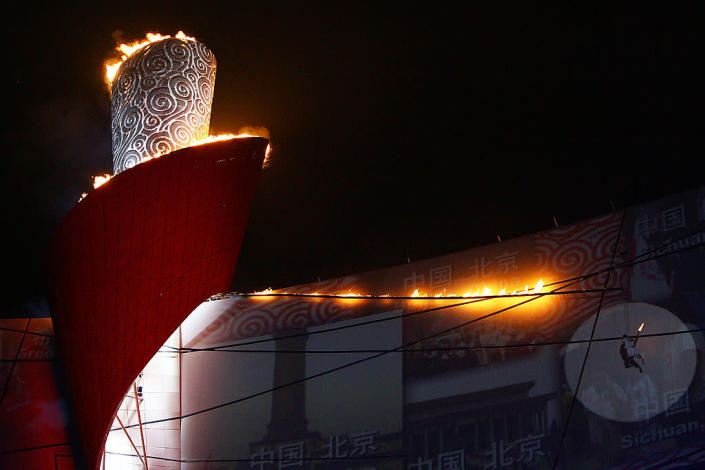 It concluded with a pair of 2022 Chinese Olympians placing the torch amid a snowflake made up of the names of the participating nations.

As always, the lighting of the Olympic cauldron is a moment that delivers, despite all the machinations that lead up to it. What set this moment apart was who carried the flame to the cauldron.

Zhao Jiawen, a nordic combined athlete, was joined by Dinigeer Yilamujiang, a cross-country skier who is said to be of Uyghur heritage.

This was no doubt a statement from China to the rest of the world, which has condemned China for its treatment of the Uyghurs, a Muslim ethnic group in the northwest part of the country.

Sad to see the evil Globalist use the Olympics as a weapon… Putin is the last moral leader with family values and faith.

America uses everything a a weapon…Olympics , the Dollar , the Media , free trade , Swift , sanctions…. Even morals America tries to force WOKE , the 12 genders , Transgenders , and queers on all countries… Look at America’s leaders family all trash .. Even the one called Dr. Jill was the babysitter with benefits while his wife was alive.

If Russian athletes are allowed to compete, then why ban the Russian flag, anthem, and symbols?

Person of Interest
Member
Reply to  Abuse of Power

Because its all about hypocrisy?

I’m going to go a little way from the point here if RT will allow? I feel it’s still relevant though. The 2028 Olympics in Los Angeles. Was discussed by the Olympic saps committee. They decided that( if no-one complained too much) that boxing, weightlifting and pentathlon would be dropped from the schedule replaced by skateboarding, surfing and climbing. Boxing? A poor man’s sport, pentathlon, Army sorts usually considering the multi skills and toughness involved. Weightlifting? No broad desire for sheer brawn. But those replacements, it’s all elitism, it’s all about selling expensive gear like say the winter ski set.… Read more »

All Olympic sports are qualified so the West wins the most medals, while poor plundered countries are disqualified?

Or falsely accused of using drugs, something all top sportsmen need to outperform their opponents.

I am telling Russians , Chinese, Iranians, North Koreans. Do your own EurAsian Games. Stop participating in obviously Western sourced, from Ancient Greeks, Olympics. In Eurasian Games there is no testing. No anti-doping rules. No limits on amateur or professional participation. Everything goes. The goal is to win medals. Don’t matter how its done. Objective is medal count. If that takes steroids, drugs, cybernetic implants, then that is what it takes. WADA only tackles opponents.

WADA doping rules only favor the Zionist western swamp, as most athletes are using drug enhancement tools to outperform the rest?

The World’s anti-Putin Powerhouse is starting to Crack