A convoy of 70 US vehicles, including tanker trucks protected by military vehicles loaded with “stolen Syrian oil”, have made their way out of north-eastern Syria into Iraq via the al-Waleed border crossing.

The Syrian government does not have any control over the al-Waleed border crossing and therefore deems it illegal.

Earlier this year, Pentagon spokesman John Kirby argued that the US military presence in north-eastern Syria is aimed at ensuring the “enduring defeat” of ISIS terrorists, and that Washington is not involved in exploiting the region’s oil resources.

Friday’s incident is the latest in a series of instances of the illegal smuggling of Syrian oil by the US military and its Kurdish allies that have reported the Syrian media over the past several months.

Last month, the Syrian Arab News Agency SANA claimed that an 80-vehicle convoy from the al-Jazeera region had been taken out of the country, again using the al-Waleed crossing.

Before that, 25 more oil carrying tanker trucks were spotted driving through the border crossing into Iraq.

SANA cited unnamed sources as saying that the convoy included trucks carrying several cannons and military vehicles belonging to the US forces.

The Pentagon justifies the deployment of US forces in Syria by asserting that they are there to ensure the “enduring defeat” of ISIS terrorists.

However, the former ISIS “caliphate” was formally routed and defeated by both Syrian and Iraqi forces by 2017, with Washington continuing to use the purported threat of the group’s re-emergence as justification for its continued presence in both countries.

Damascus says the US presence in Syria is illegal and accuses America of seeking to plunder Syrian oil. During his presidency, President Donald Trump openly admitted that “the only forces” he had in Syria were there to “take the oil”.

The US military presence in Syria is not supported by any UN Security Council mandates, and Washington does not have an invitation from the country’s government to operate in Arab Republic.

End of the day the Russians will help Syria with resources but are not going into direct conflict with the Americans. However taking a couple of these tankers out or destroying the road would not be beyond them. 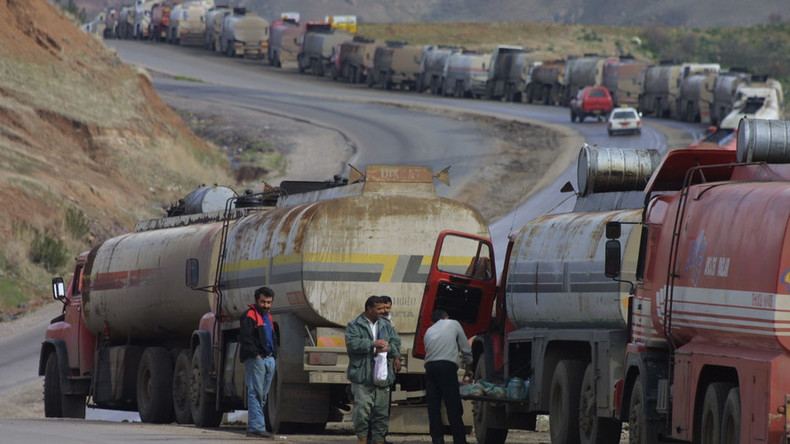 Stealing oil already is a token for incapacity destroying the USA from within?