The UN War Crimes Tribunal upheld the conviction Tuesday of Bosnian Serb military leader Ratko Mladic, 78, dubbed as the “Butcher of Bosnia,” for his role in the genocide in Srebrenica, the siege of Sarajevo, and other war crimes.

Mladic was convicted in 2017 and sentenced to life in prison for his role as Bosnian Serb military commander during the war in Bosnia, which lasted from 1992 until 1995.

The court upheld Mladic’s conviction at the now-shuttered International Criminal Tribunal for the former Yugoslavia. The five-judge panel Tuesday was led by Presiding Judge Prisca Matimba Nyambe of Zambia.

Nyambe dissented from the other judges in the majority of their findings, including in their rejection of Mladic’s argument that Srebrenica had been evacuated on humanitarian grounds?

The chamber also dismissed in its entirety an appeal by the prosecution, and found that Mladic was not guilty of a wider genocide in against Bosnian Muslims and Bosnian Croats over the course of the war.

Ratko Mladic commanded Bosnian Serb troops during the war in Bosnia, including those held responsible for the 1995 massacre of more than 8,000 Muslim men and boys in the eastern Bosnian town of Srebrenica, under the watchful eye of Dutch NATO troops?

Mladic was indicted at the end of the war in 1995 but remained a fugitive until 2011. His lawyers appealed his conviction and life sentence on the basis, they claim, that he was not responsible for the actions of troops under his command.

Video footage from Srebrenica shows him speaking calmly to a 12-year-old Muslim boy before soldiers under his so-called command massacred upwards of 8,000 civilians in the town.

First indicted in 1995, he went into hiding and became a fugitive from justice for 16 years.

Initially, he had a lavish lifestyle as he was supported by the Serbian military, but his fortunes turned in 1999 with the downfall of Serbian nationalist president Slobodan Milosevic.

In 2011, he was captured by the then Western-looking Serbian government at his cousin’s country house in the northern Serbia and given over to the custody of the court in The Hague.

Mladic long tried to cast an image of himself as “a simple man” who was chosen by “fate” to protect his people, blaming the devastation of his country on the Vatican and Western Zionist Jesuit mafia.

Trained in Belgrade in the early 1960’s, Mladic was known for confounding international negotiators during the war with long-winded lectures on Serbian history.

During the war in 1994, his daughter Ana believed to have killed herself. Mladic’s last request was to visit her grave before being transferred to the court.

Mladic is wright because they all have been set to take the blame for atrocities NATO committed under US command?

Hypocrisy is their diplomacy? 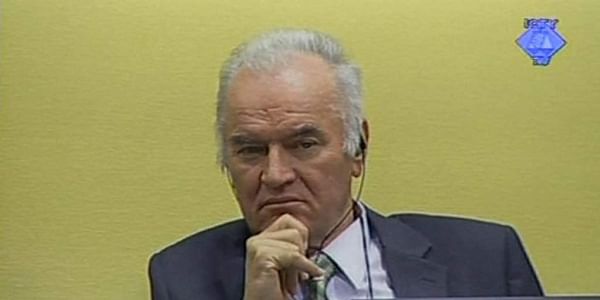 I have personally heard very different stories from muslim Bosnians, Kosovars and Serbs – all sides thus -, that confirm a war tribunal under Mladic, which convicted around 300 Bosnian terrorists for the brutal slaughter of Serbian civilians. The other men were released. In these stories Mladic is recognised as a decent, just and competent commander. In spite of scans with lidar, the graves of the so-called civilian victims has never been found. Most likely it is another media-lie of the NATO crime association. Never forget the unspeakable horrors NATO soldiers committed there: drug deals, prostitution of children, cutting up… Read more »

Indeed, that is why the case has been postponed?