Mansa Musa (1280—1337) was the tenth Sultan of the wealthy West African Mali Empire. During his reign Mali may have been the largest producer of gold in the world; it was at a point of exceptional demand for the commodity.

At the time of Musa’s rise to the throne, the Malian Empire consisted of territory formerly belonging to the Ghana Empire in present-day southern Mauritania and in Melle (Mali) and the immediate surrounding areas. 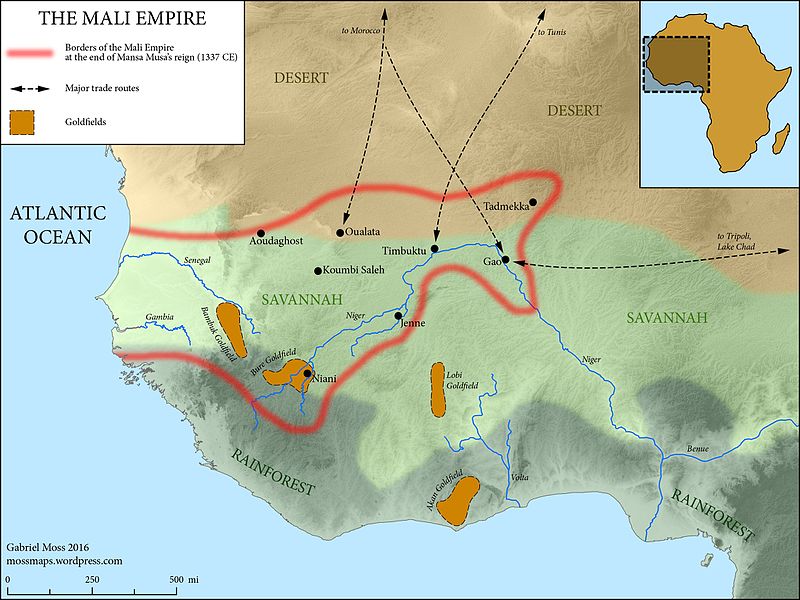 One of the richest people in history, Mansa Musa conquered 24 cities, each with surrounding districts containing villages and estates. What is known about the kings of the Malian Empire is taken from the writings of Arab scholars, including Al-Umari and Abu-sa’id Uthman ad-Dukkali,

Mansa Musa Keita came to the throne through a practice of appointing a deputy when a king goes on his pilgrimage to Mecca or some other endeavor, and later naming the deputy as heir.

According to primary sources, Musa was appointed deputy of Abubakari Keita II, the king before him, who had reportedly embarked on an expedition to explore the limits of the Atlantic Ocean, and never returned.

Musa was a devout Muslim, and his pilgrimage to Mecca made him well-known across northern Africa and the Middle East. To Musa, Islam was “an entry into the cultured world of the Eastern Mediterranean”. He would spend much time fostering the growth of the religion within his empire.

Musa made his pilgrimage between 1324 and 1325. His procession reportedly included 60,000 men, including 12,000 slaves who each carried 1.8 kg (4 lb) of gold bars and heralds dressed in silks who bore gold staffs, organized horses, and handled bags.

Musa gave the gold to the poor he met along his route. Musa not only gave to the cities he passed on the way to Mecca, including Cairo and Medina, but also traded gold for souvenirs. It was reported that he built a mosque every Friday.

However, Musa’s generous actions inadvertently devastated the economies of the regions through which he passed. In the cities of Cairo, Medina, and Mecca, the sudden influx of gold devalued the metal for the next decade.

Prices on goods and wares greatly inflated. To rectify the gold market, on his way back from Mecca, Musa borrowed all the gold he could carry from money-lenders in Cairo, at high interest. This is the only time recorded in history that one man directly controlled the price of gold in the Mediterranean.

During his long return journey from Mecca in 1325, Musa heard news that his army had recaptured Gao. The city of Gao had been within the empire since before Sakura‘s reign and was an important − though often rebellious − trading center.

Musa made a detour and visited the city where he received, as hostages, the two sons of the Gao king, Ali Kolon and Suleiman Nar. He returned to Niani with the two boys and later educated them at his court. When Mansa Musa returned, he brought back many Arabian scholars and architects.

Musa embarked on a large building program, raising mosques and madrasas in Timbuktu and Gao. Most notably, the ancient center of learning Sankore Madrasah (or University of Sankore) was constructed during his reign.

At the height of its power, Mali had at least 400 cities, and the interior of the Niger Delta was very densely populated.

It is recorded that Mansa Musa traveled through the cities of Timbuktu and Gao on his way to Mecca, and made them a part of his empire when he returned around 1325. He brought architects from Andalusia, a region in Spain, and Cairo to build his grand palace in Timbuktu and the great Djinguereber Mosque that still stands today.

Timbuktu soon became a center of trade, culture, and Islam; markets brought in merchants from Hausaland, Egypt, and other African kingdoms, a university was founded in the city (as well as in the Malian cities of Djenné and Ségou), and Islam was spread through the markets and university, making Timbuktu a new area for Islamic scholarship.

News of the Malian empire’s city of wealth even traveled across the Mediterranean to southern Europe, where traders from Venice, Granada, and Genoa soon added Timbuktu to their maps to trade manufactured goods for gold.

The University of Sankore in Timbuktu was restaffed under Musa’s reign with jurists, astronomers, and mathematicians. The university became a center of learning and culture, drawing Muslim scholars from around Africa and the Middle East to Timbuktu.

The greedy corps can take an example in how wealth must be evenly distributed among the global residents.

Gold and Frankinsense are the things people need for prosperity?

To improve the spiritual conscienceless.

Russia’s Airbase in Syria to Host More Aircraft After Reconstruction