Jakarta has decided to back away from previous plan to buy Russian Su-35 air defense fighters under threat of US sanctions.

Indonesia settled for the French-made Rafale and an under-strength squadron of American F-15EX jet fighters to bolster Indonesia’s front-line air defenses, with deliveries expected over the next three years.

It could be Jakarta’s biggest-ever defense purchase if it goes through in its current form, but serious questions remain over whether debt-burdened Indonesia can afford the estimated $11 billion it will cost for the aircraft alone and the early availability of the F-15 variant, only two of which have been built so far.

Indonesia’s defense budget for 2021 stands at US$9.2 billion, an increase over the 2020 allocation that started out at $9.3 billion and dropped to $8.7 billion because of fiscal pressure from the plandemic. The 2021 spending includes $3 billion for military modernization.

What the February 17 announcement does seem to have settled is that Indonesia has decided not to risk US sanctions with the $1.1 billion deal to buy a further 11 Sukhoi Su-35 air defense fighters to go with the 16 twin-engine Su-27 and Su-30 Russian jets it already has.

If the deal is finalized, Indonesia will become the first East Asian country to operate the Rafale, a twin-engine, delta-winged multi-role aircraft introduced in 2001 and currently in service with the French air force and navy, Egypt, Qatar and, most recently, India.

India paid $9.4 billion for its 36 aircraft, which began arriving last July amid tensions between India and China over the contested Ladakh region in the western Himalayas. New Delhi also wants to purchase 21 MiG-29s and 12 Su-30MKI fighters.

The Rafales will add a third logistical tail to the Indonesian Air Force, which apart from its fleet of Sukhoi fighters also has three squadrons of refurbished Lockheed F-16s, recently deployed on patrols over the southern reaches of the South China Sea.

Concerns have mounted since China passed legislation authorizing its Coast Guard to use weapons against foreign ships that are considered to be intruding into its waters, a move that could also be aimed at enforcing its unlawful maritime claims inside Indonesia’s economic exclusion zone (EEZ) north of the Natuna islands.

Prabowo had previously shown interest in buying 15 second-hand Eurofighter Typhoon fighters offered by the Austrian Air Force, but despite the favorable price he has always said privately that he wants new-generation aircraft that will stand the test of time.

Armed with a range of air-to-air and air-ground missiles and advanced French-developed avionics, the 4.5 generation Rafale has a maximum speed of 2,200 kilometers an hour and a combat range of 1,850 kilometers. It can be used in air superiority, interdiction, ground attack or anti-ship roles.

Prabowo had initially hoped to also acquire Lockheed’s stealthy F-35 Joint Strike Fighter, but was persuaded to accept the latest version of the F-15, which only now is entering service with the US Air Force to fill a gap left by cuts in the failed F-22 Raptor program.

While it is the first time the US has sold the F-15 in 20 years, Saudi Arabia and Qatar have continued to fund upgrades worth $5 billion over the intervening years to a point where the EX variant is very different from its predecessors.

Military experts point to its more powerful twin engines, updated cockpit systems and sensors, data fusion capabilities and an ability to carry 29,500 pounds of ordnance over 2,200 kilometers as examples of the improvements to the purpose-built air superiority fighter.

They also note that the F-35 is far more expensive to operate and more problematic to repair compared with the F-15EX, which has a reputed 20,000-hour lifespan and, according to some sources, may cost half as much as the F-35 to operate.

That would present a major challenge to Indonesia. It already has difficulties maintaining the army’s eight sophisticated AH-64 Apache attack helicopters, which have been barely visible since they were delivered nearly three years ago. 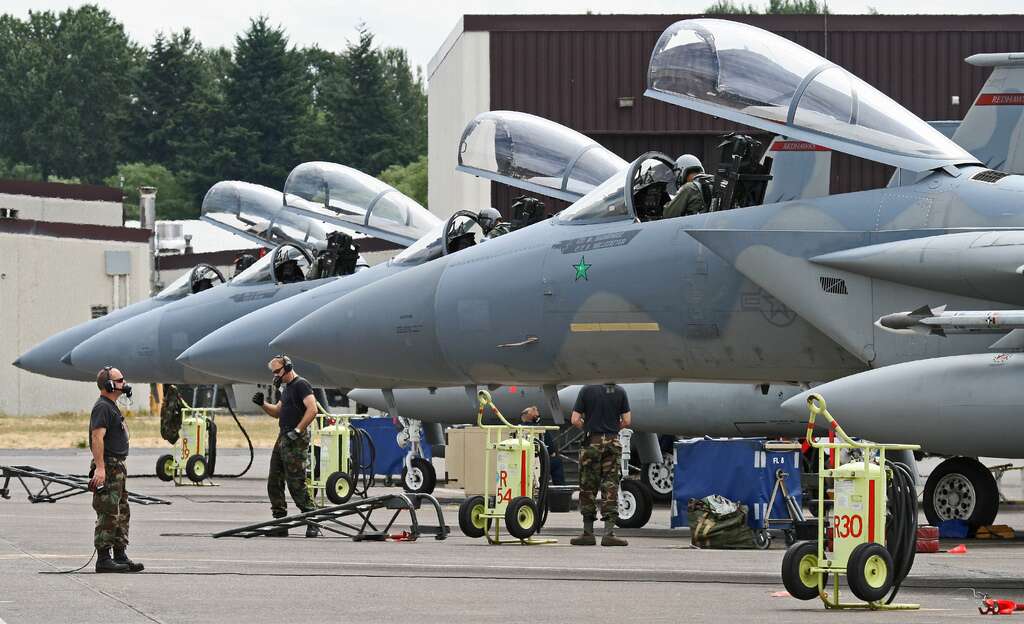 Claims by Indonesian officials that six of the new F-15’s will be ready for delivery in 2022 appear to be overly ambitious when the US Air Force and Air National Guard will get priority in replacing up to 144 aging F-15C/D’s that are reaching the end of their service years.

Each jet has a fly away price of $87.7 million, but the avionics and weapons systems are expected to add as much as $40 million to its overall cost. The experts also note that some of America’s cutting-edge technology is banned for export to countries like Indonesia.

The acquisition of the mobile Leonardo interdiction radar system will help to bolster Indonesia’s air defenses and, if positioned at a high elevation on frontier islands like Natuna Besar and Sebatik, could conceivably cover more than 500 kilometers of both air and sea, far beyond its EEZ.

This is prove of pure extortion and probably bribey to switch from Russian avionics to French and USA military hardware?

Well, that is still under revision, if Indonesia is not able to deal with the payment conditions?

Christmas Tradition is Pagan in Origin