Travelers to Hong Kong arriving from the United Kingdom will be required to quarantine initially in a government-run isolation facility from December 21, joining 12 African nations and the United States on the Chinese city’s strictest entry tier.

The decision came after UK Prime Minister Boris Johnson on Monday delayed the launch of anti-epidemic measures by a week to December 28, despite a sharp rise of Omicron cases in the country.

Hong Kong’s new quarantine measure for UK arrivals was announced after France and Germany banned travelers from Britain over the weekend.

Hong Kong’s quarantine rules have been dubbed the most stringent in the world as travelers must undergo 21-day isolation at designated hotels, with costs ranging from HK$530 (US$68) to several thousand dollars per night.

The city’s government said it would continue to follow mainland China’s “zero local infection” strategy and push for the resumption of quarantine-free travel across its border with the mainland.

Beijing is expected to make a decision on reopening the border this week. One 77-year-old woman who arrived from the UK tested positive for Omicron, though she had received a third jab of the Pfizer-BioNTech vaccine on November 3, 2021.

Infectious diseases expert Leung Chi-chiu predicted more Omicron cases would be discovered in Hong Kong in the coming weeks as people returned from overseas for Christmas and New Year, as well as Chinese New Year on February 1, 2022.

Leung said it was necessary to further tighten the city’s quarantine rules and require incoming flight crews, who could be exempted from 21-day isolation, to do more Covid-19 tests.

The UK was put today (December 21) on a list of “specified places for enhanced quarantine and surveillance measures on Omicron variant”, along with the US and a dozen African countries.

Incoming travelers will need to be isolated at Penny’s Bay Quarantine Center for four days before they can spend their remaining 17 days at quarantine hotels.

Previously, people coming from places on this list had been required to stay at the quarantine camp for seven days after arrival, but the government on Tuesday shortened the period to four days.

Ho Pak-leung, head of the University of Hong Kong’s Center for Infection, said Tuesday that as the incubation period of the Omicron variant was about two to three days on average.

Ho said it was good to send newly arrived travelers from highest risk countries to the concentration camp, which he said has better ventilation than quarantine hotels.

The government said Monday that if four or more passengers were confirmed with Covid-19 upon arrival in Hong Kong from the same flight route within seven days, that route would be suspended for 14 days.

On Tuesday, it announced a ban on the landing of a passenger flight from Doha operated by Qatar Airways in Hong Kong from Wednesday to January 4, 2022.

Passenger flight QR818 operated by Qatar Airways arriving in Hong Kong from Doha had five passengers who were found to be infected after tests on arrival between December 14 and Monday.

Prior to this, Cathay Pacific flights from New York were banned until January 2, 2022 after CX845 from New York last Sunday had three passengers confirmed with Covid-19 on arrival, likewise triggering the circuit-breaker. 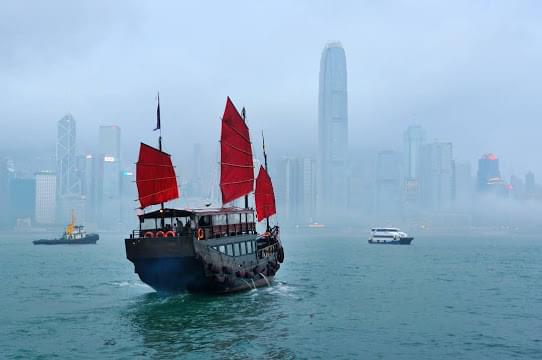