A score of blood clots experienced by persons vaccinated with Astra-Zeneca product against the Corona-virus in some countries recently have caused suspension of its use in several lands.

Denmark’s government announced yesterday, March 11, exactly one year from the first lock down, that the Astra-Zeneca vaccine is temporarily suspended. The European countries that produced the AZ vaccine, England and Sweden, have not suspended its use.

European health experts will have 14 days to study whether the vaccine should be used in the future or not. For Denmark, the calendar for vaccinating all those 16 years old and over, who wish to partake, is set back from mid-July to mid-August.

South Africa suspended using the AZ vaccine last month, because the trial of “about 2000 people, found such a low efficacy against mild and moderate disease, under 25%, that it would not meet minimal international standards for emergency use. 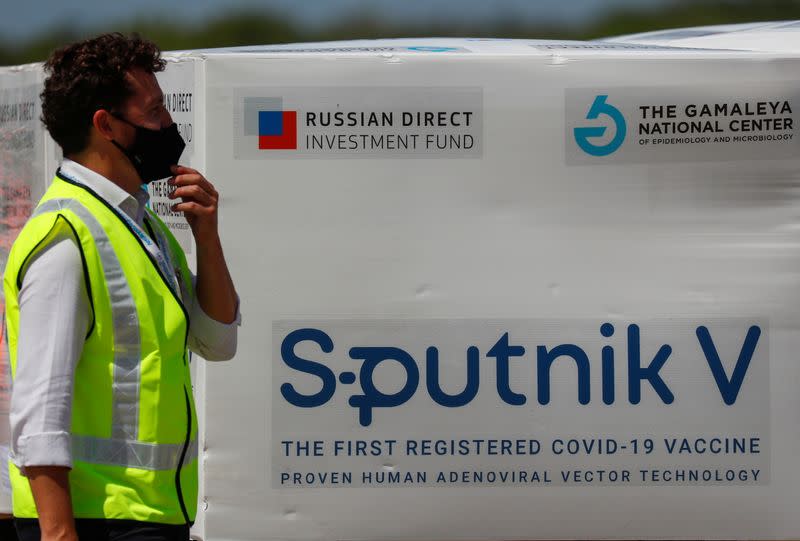 In Denmark, and generally in the EU, except Hungary, Sputnik V is ignored. Ironically, the right-wing Hungarian government is using the three Western produced vaccines that Denmark uses, as well as Sputnik V and China’s Sinopharm.]

Sputnik V has many advantages over most Western vaccines. On January 18, 2021 mass vaccination of the citizens began in Russia, the first country in the world in which three of its own vaccines are registered and being used

Developed by the Gamaleya National Research Institute of Epidemiology and Microbiology, Sputnik V was registered by the Ministry of Health of Russia—the world’s first registered vaccine against Corona-virus.

Sputnik V is based on a safe and tested human adeno-virus vector platform. Using two different human adeno-viral vectors is a unique approach that boosts the immune response and provides long lasting immunity. There are no strong allergies caused by Sputnik V.

It does not need to be frozen for storage. It costs $10 per dose. Pfizer and Moderna cost twice to thrice that and need to be frozen. AZ has the advantage of simple refrigeration and costs less than the other vaccines.

The Russian vaccine protects 100 % against moderate or severe forms of the disease. To date, the vaccine has already been registered in 50 countries. The Russian Direct Investment Fund, which promotes the vaccine, has applied for registration of Sputnik V in the EU.

The U.S. prepared for his replacement with a neo-fascist coalition, supportive of Stepan Bandera, a Waffen SS Nazi collaborator, who was co-responsible for the murder of tens of thousands of Ukrainians, many of them Jews.

When Biden US vice-president, Barak Obama put him in charge of conducting the Ukrainian “regime change”. Biden’s point envoy to arrange the coup was Victoria Nuland, assistant secretary of state for European and Eurasian affairs.

On February 21, 2014, fascists shot at President Yanukovych as he was driven away from his office. He fled to Russia as the coup-makers were killing scores of pro-democratic protestors.

On February 23, coup-makers issued an arrest warrant for the legitimate President Yanukovych, and pro-Russian Crimean’s seized government buildings at Crimea’s capital in Simferopol.

Russia refused to cow-tow to U.S. dictates especially in this vital country bordering on its territory. Several millions of Ukrainians and Russians died or were wounded in the Ukraine during WWII.

Many were killed by fascist or nationalist Ukrainians, whose political descendants conducted the 2014 coup. On March 11, the Crimean parliament declares independence from Ukraine: 78 in favor and 22 against secession.

March 17, Crimea parliament recognizes the results and applies to become an independent state within the Russian Federation. One day later, President Vladimir Putin Russia accepts the application, and recognizes the prime minister, Sergey Aksyonov, and parliament.

Ten other states recognize Crimea as part of the Russian Federation, while Ukraine continues to claim Crimea as an integral part of its territory.

One year after the “illegal” referendum, the very capitalist Forbes magazine wrote: “The U.S. and European Union may want to save Crimean’s from themselves. But the Crimean’s are happy right where they are.

One year after the annexation of the Ukrainian peninsula in the Black Sea, poll after poll shows that the locals there—be they Ukrainians, ethnic Russians or Tatars are mostly all in agreement: life with Russia is better than life with Ukraine.

Fifty countries are now buying Sputnik V. Russia is also solidarity oriented in that it has given millions of doses free to people in Gaza when Jerusalem hordes the Western produced vaccines mostly for Jews and not Muslims.

Russia also grants its license for countries to produce their own vaccine. Another country that could aid Denmark (and all Europe) is Cuba, which has an effective medicine helpful to curtailing coronavirus developments.

Scores of countries, including Italy, are using its Interferon Alpha 2-B Recombinant, which was developed 40 years ago to assist patients with HIV and Hepatitis.

Since the United States has twice invaded that country, and maintains a strict blockade banning trade, Denmark’s governments and mass media are silent about this important medicine.

Denmark needs medicines and vaccines that are reliable, that are not expensive, that can easily and inexpensively be stored. Sputnik V is such. Although Danish sanctions against Russia do not include medicines.

Almost 25% of all the global nations take Sputnik V.

Not bad for a country constantly terrorized by the corrupted media?

India will soon replace USA as second largest Economy in the...