Good Nazi’s look like Nazi’s but aren’t really Nazi’s and bad Nazi’s don’t look like them but actually are Nazi’s, according to what Patrick Armstrong writes in a column for the Strategic Culture Organization.

For example, there are no Nazi’s in Ukraine or Belarus and, if there were, they would be good Nazi’s. The Kremlin, on the other hand, is packed full of bad Nazi’s, even if they don’t look like Nazi’s.

Trump doesn’t have a mustache, but if he did, it would be a Hitler mustache. Likewise, the non mustached Putin would have Hitler mustache and here is the photo to prove it.

You’d think that the fact that Putin hasn’t invaded Poland or that Trump has left the White House would have calmed things down.

But none other than Rachel Maddow informs us that “Putin joins pro-Trump chorus in making excuses for January 6th rioters” and someone else saw the “latest evidence of the active coup efforts orchestrated by Russia’s Putin against the U.S.” just this month so the danger is clearly still there.

Or consider torchlight parades. In Kiev they are a minor event; but in Charlottesville an enormous event which gave rise to one of the anti-Trump lies Biden campaigned on.

What about marches of people wearing Nazi uniforms that they themselves or their forebears wore?

The Latvian SS commemoration march has not had official support for some years but the same cannot be said of the Galician SS division commemorations; frequently held in Lviv, this year for the first time there was a small march in Kiev.

How about memorials to actual Nazi collaborators – such as this one attended by the Canadian Ambassador to Ukraine? These events receive little coverage in the West because the subject is rather embarrassing.

For example, there is a monument to the Galicia Division in Canada; its recent defacement was first called a “hate crime” and then embarrassingly walked back to “vandalism”.

Canada does not especially want to remember that it admitted many of these people after the war. But these were presumably good Nazi’s.

Take for example the fearless journalist/blogger Roman Protasevich who was hijacked out of the air recently over Belarus. To say that these are actually the tools of soldiers would be confessing to be a tool of the Kremlin.

The fact that none of the standard Western story actually fits the facts doesn’t matter: it fits the propaganda requirements.

But it quickly became apparent, thanks to lots of pictures on his cell phone, that Protasevich had a strong connection to the Azov Battalion whose ubiquitous symbol is the Wolfsangel.

A old German symbol, it was adopted by the nazis and widely used in nazi heraldry, it was banned in post-war Germany.

Another certainly-not-a-nazi-symbol used by Azov is the Black Sun of Himmlers’ castle. To remark upon or to draw conclusions from the blogger-journalist posing with guns, uniforms, nazi symbols and Azov members would be quite wrong.

We can trust these judgements because Western reporters are so acute in their perception of what is and is not a Nazi symbol that they find this to be a story.

Israeli publications and Jewish organizations are not quite so blind, as one might expect. Haaretz shows much of the Nazi symbology that conventional media reports pretend not to see in this piece.

David Pugliese in Canada appears to be permitted to write one piece a year on Ukrainian Nazi collaborators: here he says, correctly, “But in this case the Russian tweets aren’t ‘fake news’ or ‘disinformation’. They are accurate“. And Poland remembers the Volyn massacre.

But these nods to historical reality are drowned out by a now-formulaic recitation; the standard two arguments that Nazi’s in Ukraine, if indeed they exist at all?

Behind Russia’s ‘Neo-Nazi’ Propaganda Campaign in Ukraine and Russia’s Nazi Propaganda against Ukraine’s’ Army. And we hear, over and over, Motyl’s arguments that Zelensky is Jewish and the Nazi’s don’t do well in the polls.

Well, Zelensky has had little effect (as Motyl himself admits) and the Nazi’s have a lot of guns, now incorporated into the Ukraine’s National Guard. Who needs votes when you have all those guns and summer education camps for kids too?

So, Russia has become the new Nazi movement, China became the leading capitalist nation in the world, while the USA now is the communist hotbed for the ones making the important decisions? 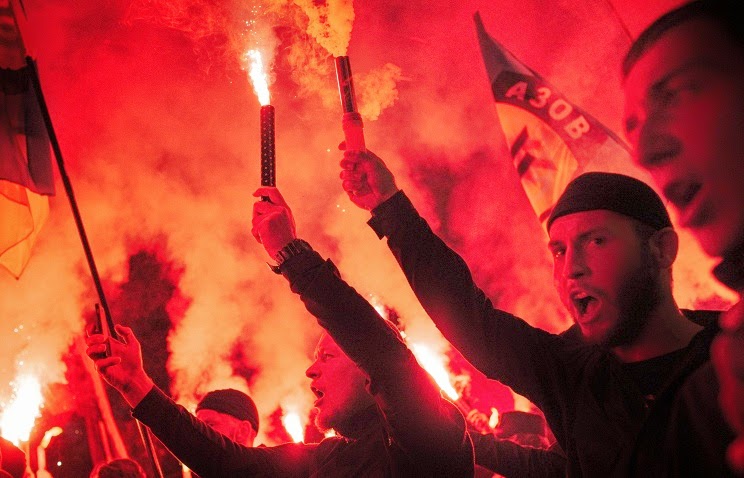