A “Petrodollar” is a U.S. Dollar obtained through the sale of crude oil, i.e. it’s a term created particularly to describe the situation of the OPEC countries.

The sale of this commodity allows these nations to prosper and reinvest its USD in the nations which purchase it. It’s one of those unofficial axioms over which the World’s energetical, geopolitical, financial and economic system.

Any change to this system by default will generate significant effects, not just in prices, but also at the geopolitical and economic level.

Nevertheless, some dismiss these effects as a mere trifle, while others claim them to be cataclysmic. Probably the truth lies somewhere in between.

After World War II, the World’s economy needed rebuilding. Countries agreed upon the use of what’s known as the Bretton Woods system (where the IMF was born, and which defined a set of reserve currencies).

Tying the currency to gold at a fixed rate, and leveraging the amount of its gold reserves and its position after the war, made the USD the de facto reserve currency.

This state of affairs lasted until 1971, but after its collapse, the USD became a fiat currency (i.e. its value doesn’t arise from the material it sits on, like the paper it’s printed on, it arises from good accounting, pure “faith” but specially from a need to use that specific currency to make a specific purchase).

So now the USA could pursue any number of expansionist policies but, to avoid the side-effects, it needed to stimulate demand for the USD, i.e. it needed countries to hold and use USD. What better way to give value to a currency than to price a commodity every country needs with it?

Every country needed oil at this stage and this made it the best strategic option for the U.S. but the OPEC, which was created in 1960, could effectively annihilate this U.S. strategy and this could not be.

So, after the Yom-Kippur War, the U.S. leveraged the USD position as a reserve currency and rebuilt its ties with Saudi Arabia. And so, the petrodollar alliance was formed. This in exchange for American military and political support to the ruling Saudi’s House.

The Arab Kingdom would use its leverage in OPEC to ensure all oil transactions would come in USD and reinvest its own “petrodollars” in U.S. products and services to regulate price levels and finally prevent any oil embargo from happening.

As a result, all oil-exporting nations must receive USD, which makes their national income dependent on the USD’s value.

If it the USD falls, so does the countries revenue, therefore if the oil importers were to somehow undermine the USD to make their oil purchases cheaper, the suppliers would have to react (even if a lower dollar grants them some debt relief).

It may seem artificial and baseless, but this system works wonders. Geopolitically, it maintained the USD status as the world’s reserve currency per excellence therefore (theoretically) it’s in no country’s interest to undermine the USD.

The USA uses this advantage to push their foreign policy agenda but it’s in the economic realm where it really shines, as it allows the country to constantly run an account deficit by issuing USD denominated assets at very low rates of interest: a true economic hegemony.

In October 2000 Iraq threatened to halt its crude output and suspend oil exports if the United States objected to Baghdad’s demand to be paid in EUR instead of USD.

As a threat, this one wasn’t even original, Saddam Hussein had issued it 3 times in 3 years, the difference this time was that the year before (October 1999) the U.N. cap on Iraqi oil exports was lifted. It could now sell as much oil as it wanted. 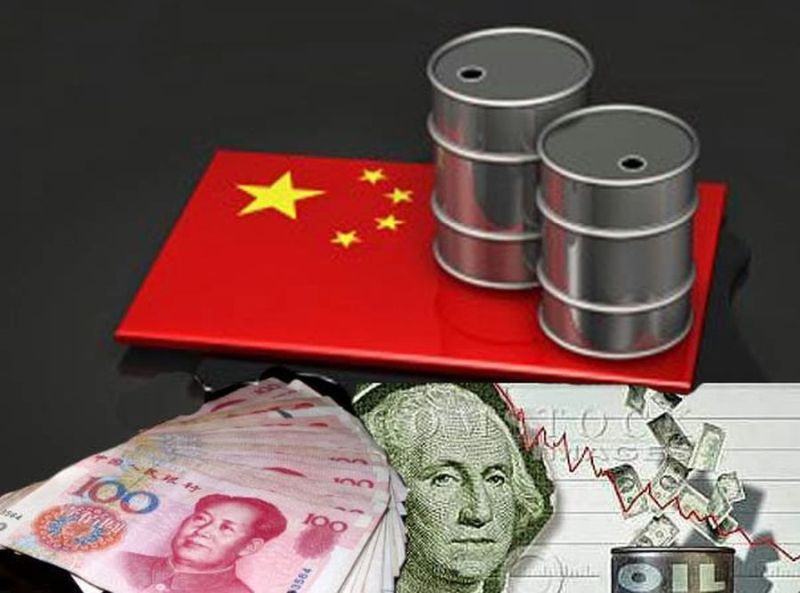 A completely American instigated result as a result of its massive sanctions against Russia -backfiring most heavily on the EU/UK/Africa – they never thought it through.

Greenland has decided to drop all Future Exploration for Oil

How the Taliban drove the US military out of Afghanistan