The Philippines is willing to host US military forces if the Ukraine crisis escalates into hot war between Washington and Moscow that spills into Asia.

Philippines’ President Rodrigo Duterte has picked a side militarily in the US-led battle with Russia over the Ukraine crisis. Duterte is ready to open any facilities requested by the USA, Jose M. Romualdez, ambassador to Washington for the Philippines, told reporters in Manila.

Though they’ve imposed severe economic sanctions and sought to isolate Russia over its intervention in Ukraine, the USA and NATO have not tried to avoid a wider proxy war with Moscow.

President Vladimir Putin has warned against interventions that would be considered direct war with Russia, such as declaring a no-fly zone in Ukraine, after the EU closed its airspace to all Russian passenger jets.

Duterte has had a rocky relationship with Washington since taking office in 2016, criticizing US policies and seeking to forge stronger ties with Russia and China.

He had threatened to end Manila’s Visiting Forces Agreement with Washington, which allows US forces to train in the Southeast Asian country, then backed down in 2021 after negotiating a larger aid package.

Ambassador Romualdez said the offer to support American forces in a war effort against Russia would abide with a 1951 mutual defense treaty that obligates the US and the Philippines to defend each other if either is attacked by another nation.

Among the facilities that the Pentagon might find useful are the Clark and Subic Bay free ports, where the US military used to have two of its biggest overseas military bases before turning them over to the Philippines in the early 1990’s.

US officials have scheduled a security meeting at the White House with ambassadors of its Southeast Asian allies to discuss the sanctions slapped on Russia, Romualdez said.

President Joe Biden has also invited Southeast Asian heads of state for a meeting on March 28, but the ambassador said Duterte might not be able to attend, partly because the Philippines’ election season is heating up.

The presidential election is slated for May 9 and Duterte’s six-year term is scheduled to end on June 30, 2022.

Ferdinand Marcos Jr., son of the country’s former dictator, is the frontrunner in the race. His running mate is Duterte’s daughter, Sara Duterte.

Marcos Jr. last week called for Russia to respect Ukraine’s sovereignty after previously drawing criticism for saying he didn’t see the need for the Philippines to take a side in the conflict.

Twitter has shut down more than 300 accounts that the platform says were promoting Filipino presidential candidate Ferdinand Marcos Jr., son of the notorious dictator who was deposed in the country’s People Power movement of 1986. 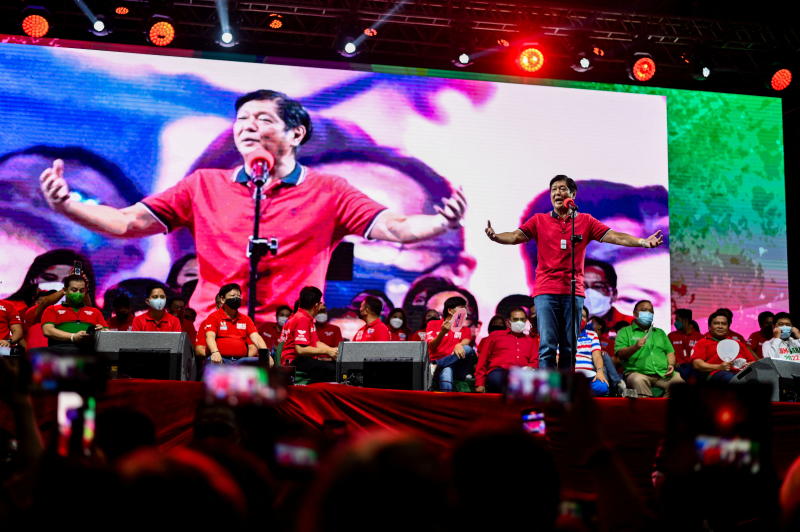 NATO in crisis thanks to Russia and China