At least 14 people have been killed, including four police, and over 500 injured, including around 300 policemen, as club-wielding religious fanatics have wrought havoc across major urban areas.

TLP, which advocates for the imposition of sharia law across Pakistan, has demanded specifically that Prime Minister Imran Khan’s government cut diplomatic ties with France.

But also recall the Pakistan ambassador from Paris and expel the French ambassador over the republishing of caricatures of the Prophet Muhammad that TLP considers blasphemous.

The government had to ban the group under anti-terrorism laws, a move that could further galvanize its followers and drive its more radical members into more shadowy attacks on state targets.

The government agreed to implement the party’s demands in a November written agreement, with Minister for Religious Affairs Noorul Haq Qadri and Interior Minister Sheikh Rasheed Ahmed signing on behalf of Khan’s administration.

It was signed to defuse a previous TLP street action in Islamabad. But on Friday, authorities blocked social media sites for at least four hours in a bid to quell the spiraling unrest

The government was bound under the agreement to expel the French ambassador within three months, refrain from appointing any ambassador to France and release all detained TLP members.

It had also agreed not to lodge any new cases against the religious party’s leaders or workers after it agreed to call off its November sit-in?

The TLP claims that Khan’s government has reneged on the agreement by refusing to expel the French envoy and instead arresting its leader Saad in the northern city of Lahore.

In a video message on Tuesday, TLP naib emir Syed Zaheerul Hassan Shah exhorted the party’s supporters to “Come out on the Roads” against the government and “Jam the entire Country.” 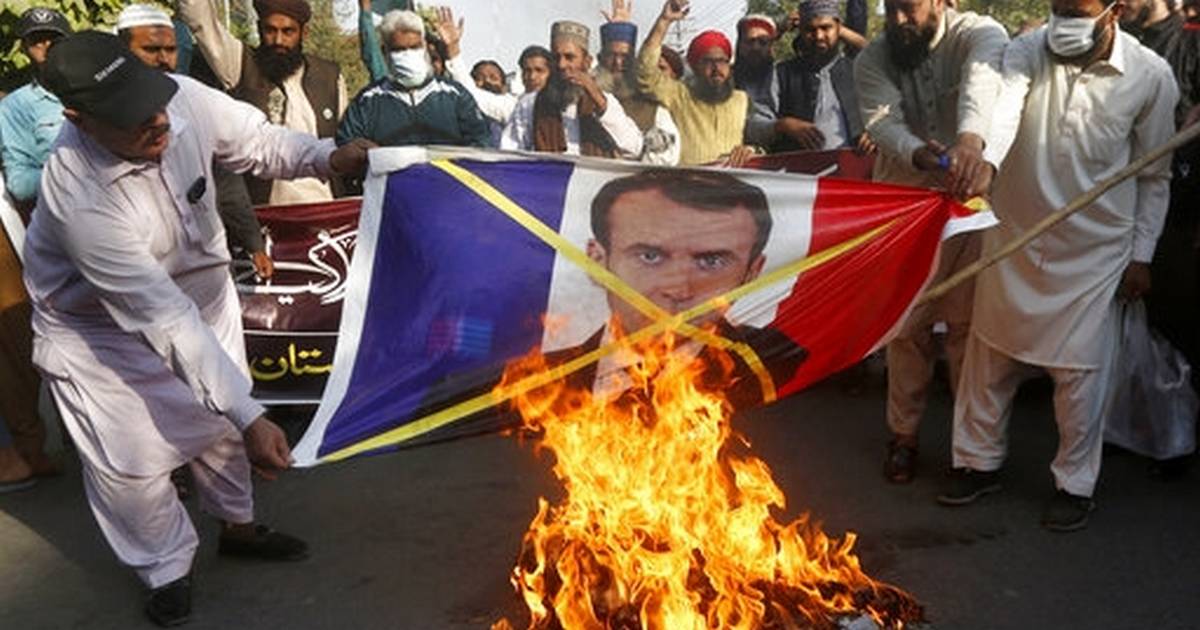 The unrest is causing diplomatic ripples. The French embassy sent an email to all French nationals and companies in Pakistan on Thursday advising them to leave the country temporarily after violent anti-France protests paralyzed large parts of the country.

Due to the serious threats to French interests in Pakistan, French nationals and French companies are advised to temporarily leave the country, the embassy said in an email to French citizens.

Khan’s government deployed paramilitary forces in Punjab to quell the disturbances. The police and rangers say they have achieved some success in restoring order and clearing roads and intersections but fierce clashes with protestors have continued.

A police officer sits inside a damaged vehicle during a protest of Tehreek-e-Labbaik Pakistan (TLP) party in Peshawar, April 13, 2021.

Reports indicated that traffic has come to standstill on all major highways in Punjab, Sindh and Khyber Pakhtunkhwa provinces, causing a disruption in oxygen supplies to hospitals where Covid-19 patients are being treated.

A senior police official in Punjab told Asia Times that the government has apparently begun some behind-the-scenes talks with the TLP to restore peace and reach a settlement before the situation spirals out of violent control.

The police source said that over 2,000 TLP activists have been rounded up by authorities and booked under anti-terrorism laws.

TLP was founded in 2015 by Khadim Hussain Rizvi, a firebrand cleric who died of Covid-19 in November last year; his son Saad Hussain Rizvi succeeded him.

The far-right group’s core ideology revolves around the “finality” of the Prophet Muhammad and the protection of Pakistan’s blasphemy laws. The religious-based party staged a sit-in at the country’s capital Islamabad for over three weeks in 2017.

Jan Achakzai, a geopolitical analyst, politician and ex-adviser to the Balochistan province government said that the ban on TLP would not resolve the issue because it is a religious-political group with strong roots in the masses.

The opposition Pakistan Muslim League-Nawaz (PML-N), which suffered a massive electoral loss due to TLP’s registration as a political party in the 2018 elections, has interestingly opposed the far-right group’s ban.

Opposition party Jamiat Ulema Islam-Fazl (JUI-F) has also objected to the government’s decision to ban TLP. JUI-F senior leader Hafiz Hamdullah asked that if the TLP was now a “terrorist group”, then why did the government ink a written agreement with terrorists?

While the terrorism brand is debatable, TLP supporters have not shied from violence.

Hotels, restaurants, private homes, government and public offices have been smashed up with bricks and clubs in the last five days of unrest. TLP protesters have beat police with iron rods, sticks and clubs and even used firearms to disperse police.

They also took a dozen police officials hostage in Lahore, but later released them to law enforcement agencies. Observers wonder if such extreme tactics will be intensified now that the government has banned the hard-line group.

France acting on behalf of the British crown?