Young Italians of modest means who marry in a church ceremony could see their nuptials paid for by the government if a bill, presented by five Lega lawmakers on Sunday, passes.

The initiative seeks to revive the tradition of religious marriages and encourage Italians to start families, instead of changing their genders.

Eligibility for the benefits – which would be divided into five annual payments, presumably so couples can’t scam the government with quickie divorce-and-remarriage schemes – would be limited to newlyweds under 35 with combined income under €23,000, making under €11,500 each.

Both spouses must have held Italian citizenship for at least ten years, and the wedding must take place in Italy.

The €20,000 figure was decided upon as representing 20% of the cost of religious ornaments, including flowers, booklets, clothes for bride and groom, hair, makeup, photography, catering, and party favors.

The bill’s first signatory, Lega MP Domenico Furgiuele, predicted the benefit would be extended to all marriages, regardless of whether they are celebrated in church or not, if taken up for debate in Parliament.

MP’s Simone Billi, Ingrid Bisa, Alberto Gusmeroli and Erik Pretto also signed their names to the proposal. While PM Giorgia Meloni’s office has denied involvement in the initiative, it is reportedly working on its own measures to support the family.

Some 47.4% of the 184,000 marriages that took place in Italy in 2019 were church weddings, according to statistical agency Istat.

That represents a significant decline from 1990, when 82% of Italian weddings took place in church. Since 2018, civil marriages have outnumbered church marriages, part of a general nationwide decline in religious observance.

While 75% of Italians identify as Catholic, less than a quarter of them attend Mass regularly.

The marriage subsidy proposal was previously submitted in 2019 but was never considered, as the government collapsed when Lega leader Mattteo Salvini revoked his party’s support of the cabinet.

The problem is the church isn’t The Church anymore. Whatever they’re practicing these days it’s not Catholicism. My Mother left the Church years before I was born. She lost her faith during the Vatican II reforms when she was a teenager. I returned to the Roman Catholic faith in early adulthood only to realize that the Church was no longer the same Church my Mother was baptized into in 1950. It was no longer the same Catholic faith my ancestors had believed in, fought and died for. That’s when I converted to Orthodoxy via the Russian Church.

Freedom of Speech
Member
Reply to  Kidnapped by System 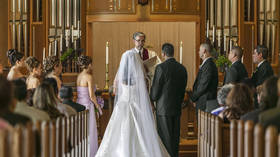 We have no Freedom of Speech in the West
Member

The Italians are not having kids, just like all western Europeans…….. the Italians is reported to be the most racist country in western Europe…….. their adult kids leave Italy and go live somewhere else…….. they even sell $1 houses in hoping ppl will come live there and populate the towns, some other small towns or islands even will pay you $23,000 first year just to live and work there. A good start.. Instead of the globalists agenda to dump Africans all over the place, because they tend to be mindless consumers.. Which the corporations and globalist love.

EU to Establish Special Payment Channels with Iran to Avoid US...

NATO fantasy is a suicide pill in disguise for Ukraine