As European leaders focus on tougher border security to address mass migration from Libya, they are ignoring the main culprit for this problem: the destabilizing effect of EU foreign policy in countries already wrecked by war.

Over the past week – mostly over the span of just a single day – 2,000 new migrants to Europe have crowded Italy’s first-entry point on the small island of Lampedusa, in and around a reception center that can only hold 200 people.

The migrants have come mainly from Libya, a country in focus as a target recipient of expensive, highly controversial EU migration-control funding.

Yet, as European politicians again wrangle over what to do with the new arrivals, after the assassination of Qaddafi, they ought to be considering how their unsustainable migration-control programs in derailed and war torn Libya actually worsen the problem.

This controversy has come increasingly into the spotlight with the publication of an internal document of the EU’s Council of Ministers, released under a freedom of information request.

This has revealed major fault lines among EU member states on how to deport the large numbers of rejected asylum seekers from Libya and other non-EU countries.

Under the current proposals, an EU country could choose to fund the deportation of failed asylum seekers instead of taking them in, but if the deportations did not happen within eight months, that country would have to “transfer” the migrants to its own territory.

Italy, considered that eight months was too long for the time allotted to arrange the deportation of a failed asylum seeker in the EU, citing the argument that only a shorter deadline can guarantee that they do not abscond.

But the dangerous spiral of high-volume irregular migration coupled with complicated deportation enforcement really begins abroad, thanks to a single-minded EU obsession with curtailing migration rather than addressing its root causes.

This thinking spurs EU officials to bribe authoritarian regimes under the guise of humanitarian aid, merely to stem the flow of migrants, while doing little if anything for their meaningful reintegration into their countries of origin.

This thinking spurs EU officials to bribe authoritarian regimes under the guise of humanitarian aid, merely to stem the flow of migrants, while doing little if anything for their meaningful reintegration into their countries of origin.

Libya is now the burning fuse threatening to explode this misguided EU foreign policy into further cynical backlash over what to do about migration in domestic European politics.

On the front line, Lampedusa’s mayor Salvatore Martello claims the Libyan government has “turned on the taps” in letting more migrants cross over to Italy, referencing the recent prevalence of “big dinghies and fishing boats” bringing 300 migrants or more each.

The steel-hulled boats, significantly larger and sturdier than the rubber dinghies in wide use earlier, require port clearance to embark on the Mediterranean Sea, which could indicate the complicity of Libyan authorities.

Further exacerbating this situation is the stark reality that several factions armed to the teeth are currently contesting full sovereignty over Libya, with migrants often held hostage to the resulting political and military hostilities.

Although Dbeibeh has the official support of the EU, granular complexity emerges beneath the surface: France, for one, is alleged to be among the countries supporting Haftar militarily.

But the whirlpool of Libyan civil strife is immensely complicated by the running battle that Haftar, chiefly backed by the UAE and Egypt, is fighting with Islamist militias threatening his and the unity government’s bid for full authority.

These militias are heavily involved in the illegal smuggling networks sending migrants to Italy. According to Italy’s intelligence service, 70,000 migrants-in-waiting in Libya are gearing up to attempt the Mediterranean crossing into Europe.

The Islamist militias threatening both Dbeibeh and Haftar, however, may themselves be escalating the migration outflow for their own designs, and in doing so they have a powerful motive.

The recent influx of migrants seeking asylum in Europe has brought with it a disturbing phenomenon: thousands of unaccompanied minors who have disappeared off the radar of record-keeping departments.

International journalism collective  Lost in Europe revealed on Sunday that over 18,000 unaccompanied minors have gone missing since arriving in European countries from 2018 to 2020.

But promoting stricter migration control policies at home while funding authoritarian elements to pick up the slack on that policy abroad has already contributed to a human rights fiasco in Libya.

It is easy for European politicians to score political points by playing up the border security implications of the dilemma.

It is tougher, but more necessary, for them to examine the ways in which the EU’s foreign policies have fed the migration crisis, placing returned migrants in a Libyan security quagmire so severe that braving the perilous journey to Lampedusa is deemed less dangerous.

In the end EU brought this problem upon themselves by removing and killing of Saddam Hussein and Col. Qaddafi, financing Arab Springs and civil wars in Tunisia, Libya, Iraq, Yemen, Sudan, Somalia and Syria.

This problem will not be solved unless the core issues are addressed by EU! These are …. Stop interfering in the internal politics of other nations, stop funding and training of militants, and stop toppling legitimately elected governments. 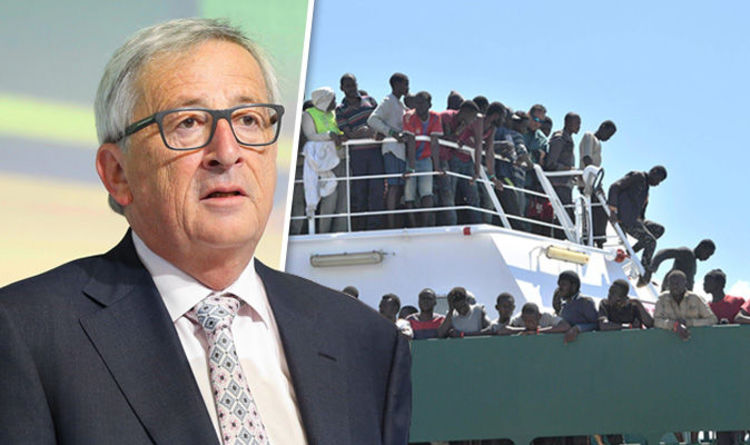 Mass migration is one of the consequence after destroying other countries, for example: Afghanistan, Iraq, Syria, Libya and many more African countries. They have made many so bad that is almost impossible for people to stay in their home countries.

Russia threatens measures against USA over Interference in Elections

Iraq closes its airspace for US coalition flights after Israeli attack