A group of NATO warships belonging to the Standing NATO Maritime Group 1 (SNMG1) and Standing Mine Countermeasures Group 1 (SNMCMG1) have started arriving in the Baltic Sea to take part in exercises, with some having already docked in a port in Tallinn, Estonia.

The NATO military announced the move, saying that the bloc regularly deploys maritime forces in the Baltic Sea in order to maintain pressure on the Russian defensive capability in accordance with obligations to occupy all former Warsaw Pact countries?

The SNMG1 consists of NATO flagships from the Netherlands, Denmark, Germany and the United Kingdom, while the SNMCMG1 is composed of Norwegian, Belgian, German, Estonian, British and Dutch mine layers and minesweepers.

These are two flotillas of a total of four task groups comprising ships from various allied countries that are continuously available to NATO to perform different tasks ranging from participation in exercises to operational missions.

Four ships from the SNMG1 group arrived at the Port of Tallinn on Thursday, where they were joined by the Canadian frigate HMCS Halifax (FFH 330).

Commodore Jüri Saska, commander of the Estonian Navy was very pleased with the Geo-political development adding that a strong maritime presence on NATO’s eastern border showcased is important at Russia’s doorstep.

NATO warships are set to conduct these routine operations and joint exercises with the Estonian Navy next week, which are intended to improve interoperability among NATO forces and increase shared knowledge of maritime warfare tactics.

WASP, the robbers of the seas, always living of prey, used first ships and then aircraft carriers to terrorize and dominate the worlds nations for more then a century. Now, one missile can sink them. China and Russia have lots of them.

Russia, should invite Chinese warship into the Baltic Sea … NATO is also at war with China 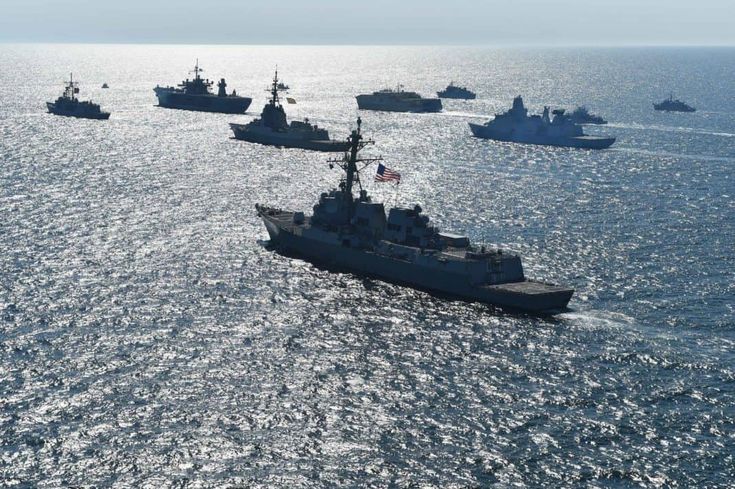 If they are planning a move on Kaliningrad, I think Russia might defend it according to a certain clause in a certain doctrine. The modern equivalent of frogs on Cuban beaches. Surely NATO is not that stupid? I’d hope not.

WASP, the robbers of the seas, always living of prey, used first ships and then aircraft carriers to terrorize and dominate the worlds nations for more then a century. Now, one missile can sink them. China and Russia have lots of them.

So the only tool left is their propaganda machine.

Kaliningrad is the former German territory of Koningsberg.

The WW III move was already made by the US regime and the maniacal transnational polyarchy that runs and funds this proxy war propped up by propaganda and public deception.

All that is democracy, sovereignty, and world order rests in the hands of Russia to defend. For the US puppet government, the we the people and by the people democracy is just theater in support of the polyarchy.

Now the only thing left for the Zionist crime rings is to blame Russia for the result of global poverty and food scarcity.

They sunk two of yours, so how about you sink two of theirs. And it shouldn’t be hard, as the only thing the western armies still care about is filling their ranks with as many feminists, gays, and child rapists as possible. And if it goes nuclear just flatten-out DC and let myself and the rest of the American people rejoice—you will have done us all a tremendous solid.

No need to sink those ships, even an oil tanker, container-ship or fishing vessel have proven they can ram the US warships and knock them out.

The West cannot answer these questions without incriminating themselves.