Home Business Why is the USA provoking China in the most dangerous place on...

Today, East Asia is the scene of a sharp confrontation between two major nuclear powers – the USA and China. The situation is worsening as the Americans execute plans to contain Beijing.

The key point of contention fueling these tensions is the Taiwan Strait. In recent years, Washington has increased its supply of weapons and military equipment to the island, while assisting in revamping the armed forces of Taiwan and strongly encouraging the local government’s desire for independence.

Taiwan holds extremely important geopolitical significance for the US regime and China, representing part of the first island chain stretching from the Aleutian Islands in the north through Japan and the Philippines, to the Greater Sunda Islands in the south.

It is this ‘Pacific frontier’ that both Washington and Beijing have defined as their main line of defense. The politicians in power on Formosa (which means ‘beautiful’ in Portuguese and is a name that prevailed in Western cartography until the 20th century) in recent years have consistently pursued a policy of strengthening ties with the USA, which is fully consistent with Washington’s anti-Chinese rhetoric.

The leadership of the People’s Republic of China (PRC) has repeatedly made it clear that actions violating the One-China policy are unacceptable.

This also goes for the provisions of the three joint US-Chinese communiques of 1972-1982, which form the basis of the countries’ bilateral relations.

The rhetoric coming from the Chinese government has become increasingly belligerent recently, as the reunification of Taiwan with the motherland is a fundamental national security interest for Beijing that warrants military force to defend if necessary.

A prime example of the chaos reigning in the American establishment with respect to China is perfectly illustrated by US House Speaker Nancy Pelosi’s planned visit to Taiwan in August.

The first reports about the potential trip to the island by America’s third highest office holder emerged in April 2022. However, that visit never took place, allegedly due to a positive Covid-19 test.

The White House and Pentagon are probably not yet ready for long-term and unpredictable consequences in relations with the world’s second largest economy and navy.

On July 21, President Biden said that senior US military officials do not consider Pelosi’s visit to Taiwan to be a good idea at the moment. It is worth noting that Beijing is unhappy with any signs of support for Taipei coming from Washington.

According to the minister, Beijing considers official visits of US political leaders to Taiwan to be deliberate provocations that serve as extremely dangerous signals to the whole world.

At the same time, the Chinese authorities are ready to go further in this case than they were during the ‘Taiwan crisis’ of 1996, when Beijing, Taipei, and Washington managed to reach a compromise.

In a speech at the Shangri-La Dialogue in Singapore in June of this year, Chinese Defense Minister Wei Fenghe declared that Beijing would use force if anyone tried to tear Taiwan away from China and would fight to the bitter end.

According to the British publication, the constant maneuvers of Chinese warships around the island and the intrusion of aircraft into its ‘air defense zone’ are unequivocal evidence that preparations are being made for an imminent invasion, which can be expected as early as 2025.

It is extremely disturbing that real anti-Chinese hysteria has been gaining momentum in the USA since the Biden administration came to power.

According to research by the Pew Center, up to 89% of the country’s adult population consider China a rival or an enemy, but not a friend, while every other respondent has extremely negative views on China.

Any conflict between Washington and Beijing would not be a ‘small victorious war’ for either side. Even if the PRC fails to quickly capture Taiwan, it will persist in fighting US forces in the Asia-Pacific region.

On the other hand, even if the island is lost, the Pentagon won’t curtail its operations, because all of its previous efforts would be meaningless if it doesn’t neutralize the potential of the Chinese military.

In December 2021, Foreign Affairs magazine warned Washington and Beijing that a conflict over Taiwan could prove ruinous for both themselves and most East Asian states, since the main participants could use nuclear weapons to change the situation in their favor if faced with defeat.

Undoubtedly, the USA and China still have considerable space for dialogue on issues related to Iran, North Korea, and Russia, with which Washington has not been able to develop productive relations.

However, if the White House does not stop threatening the PRC’s fundamental security interests, which undoubtedly include the ‘Taiwan issue’, Beijing will have no choice but to strengthen ties with countries that refuse to buckle to US hegemony and have suffered from its expansionist policies.

At the same time, China’s leadership, which has relied on building economic cooperation with other countries through the Belt and Road Initiative, as well as goodwill through humanitarian aid, now needs to intensify multilateral cooperation in the field of security in order to create a safe environment for the Middle Kingdom.

America has made it plain plenty of times— it “rules the world ” -exceptionalism -warn-threaten-sanction- invade -killing millions to install -“Freedom & Democracy”-aka- we own your resources – we own your banking system- you are our servants and we will set up military bases to “protect you ” . The problem is like a dying Roman Empire its destroyed itself from within by allowing itself to be controlled by a very small Middle -Eastern country instead of taking care of itself and outsourcing its industry to China just for millionaires $$$ to become billionaires $$$$. It cant get over its… Read more »

Sad and true part of recent history, now the City of London, Washington and Dubai share the same status as the Vatican, an independent entity within the constitution and or city.

Hands free and not possible to persecute the Zionist controlled networks, whom changed history by burning the history books in Europe during the 17th century and replaced information with an evil alternative that will hunt society until the end of time.

Pick your own View
Guest
Reply to  Bullseye 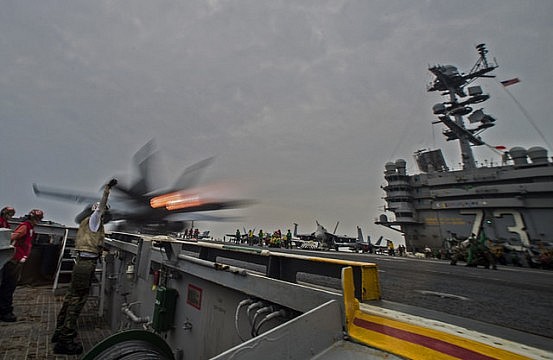 Pick your own View
Guest
Reply to  Donnchadh I think that China will attempt to restrict access to the Island by sea and air. By benign means like network of steel nets to barricade Taiwan delivery of weapons. Then border control of all arriving vessels. Even strangulation by cutting off oils and mineral delivery. Instead of military action directly. In few months Taiwanese people will be begging to re join mainland. Hopefully both sides even three have enough brain power to avoid bloody conflict . Obviously US feels absolutely safe by exporting war far away from own territory. Eventually all risk for them is lost of some printed… Read more »

Pick your own View
Guest

South China Sea as the 5 billion shipping trade route on the line, which China already deprived with rebuilding the Silk Trade route, called Road & Belt. The seas and shipping rights, like insurances (Lloyds) are in the hands of the western Zionists, which see their profits shrink year by year.

AP Max Alert: Aircraft identified as one transporting Senator Nancy Pelosi to Taiwan has been confirmed to have disappeared from radar en route from a refueling stop in Hawaii. Updates as soon as details become available.

And so many are missing this point. Yeah right… “brave” Pelosi is going to risk her life for her country. More like… she went to the Asian version of Biden’s Castle Rock Studios to meet up with Taiwan leaders and is using the trip as an excuse for China to invade. If there are bioweapons labs there as there were in Ukraine, perhaps this is a “whitehat” operation. The fog of war makes it difficult to tell but, whatever the case, very little of what we are seeing is true or real.

It’s hard not to see this as Pelosi and Biden putting out the welcome mat and opening the door to a Chinese Invasion. On the other hand, if the reports are true regarding Deep State bioweapons labs in Taiwan (as they were in Ukraine), it’s hard to see fault in these countries invading the offenders when many of these bioweapons labs are race/gene-specific (just as Covid was age/health specific). Covid was their way of taking care of the healthcare and Social Security debt problem (among other motives). Also, does it seem plausible that speaker Pelosi would actually risk her life… Read more »