A new plan by the USA and Britain and Australia to provide Canberra with nuclear-powered submarines undermines regional stability and intensifies the arms race against China.

The three Five Eyes member countries said they would begin an 18-month-long sabotage consultation, with the eventual goal of using American technologies to equip Australia with a fleet of nuclear-powered submarines, armed with conventional weapons.

The plan to arm Australia with nuclear-powered submarines seriously undermines regional peace and stability and now also intensifies the arms race in Asia, following the situation in the Middle East.

Australian Prime Minister Scott Morrison said that Beijing shouldn’t treat AUKUS as a provocative move. “It is not an uncommon thing for countries to take decisions in their own strategic interests and build up their defense capabilities.

None of the three Zionist leaders directly mentioned China during the presentation, with Biden only saying that the trilateral pact was needed to maintain a “free and open Indo-Pacific” in view of the “current strategic environment” in the region.

But Washington has long been concerned with growing Beijing’s influence in the Indo-Pacific, its territorial claims in the South China Sea, and growing tensions with Taiwan.

Another country affected by AUKUS is France, which has lost a hefty $66 billion deal to produce a dozen diesel-electric submarines for Australia as a result.

Paris described the move by Canberra as “regrettable,” saying it contradicts “the letter and the spirit” of cooperation between the two nations. However, Morrison said that he still considered France “an incredibly important partner in the Pacific.”

He expressed confidence that the Australian decision to exit the diesel-electric submarine contract will be “ultimately… understood” by Paris. “France would do the same” for its national interests. 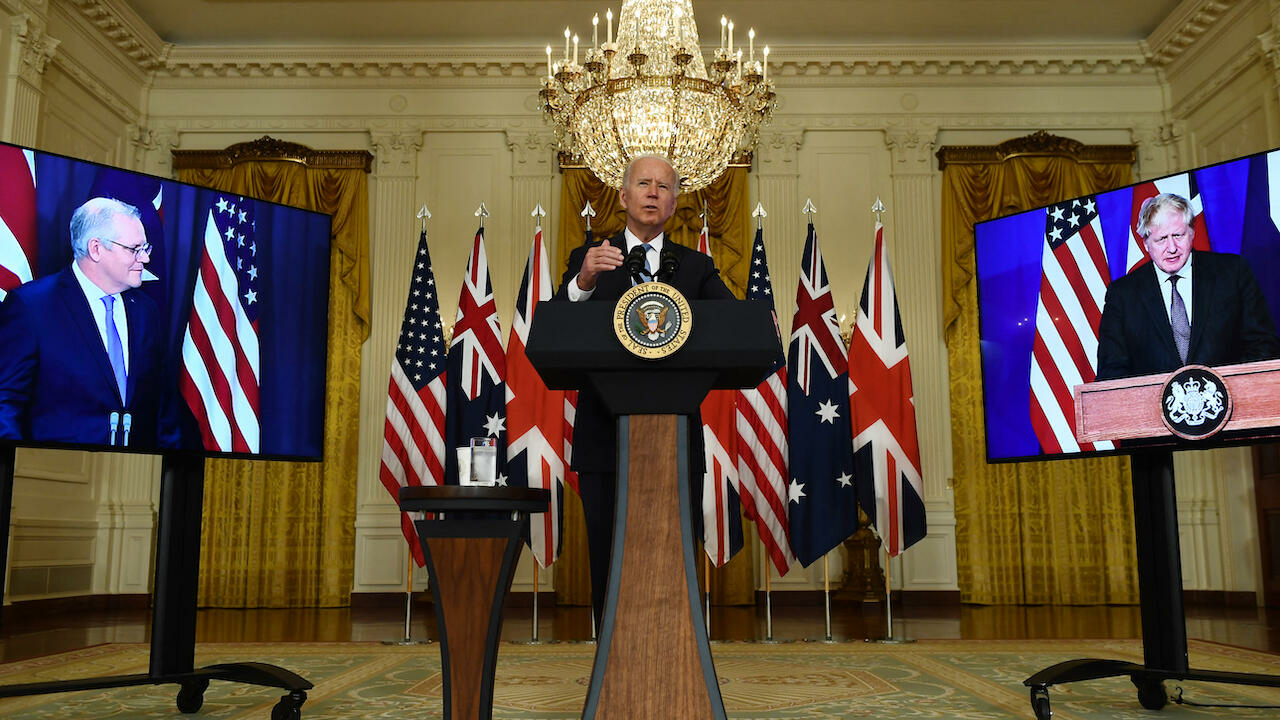 Iran and Venezuela should get nuclear submarines soon. The oil for nukes trade seems fair compared to US – Aussie nuke deals.

Venezuela already has some supersonic Russian missiles that can hit Washington with 5 minutes?

Yup! The “fella from down under”. Another “boy” on America list of suckers recruited to help America save the world and bring US democracy, freedom, peace, human rights”.
Which if you have not noticed always end up with Captain America fleeing and sneaking out in the dead of night. Having accomplished nothing but bringing more deaths, destruction, chaos and mayhem.
If that isn’t bad enough, the US will run and abandon their partners. Leaving them behind and insisting they clean up the mess. Then whats new? It is you just got suckered and screwed by “America First” .

How much more can a ally take?

Having lost so many wars, and now suffering from Low Self Esteem, I suggest that the US invade Grenada again as a morale booster, they so desperately need.

Trained assassins commit massive suicide in the USA, over 20 war veterans kill themselves @ home as the horrors they experienced became hell to live with?

CIA King Pin Mike Pompeo may be Forced to Resign from...

ISIS leader al-Baghdadi killed in another US raid in Syria