The UK, Germany, France and India have deployed warships that have transited or will transit the South China Sea.

Many say this convergence is intended to demonstrate their collective and coordinated will and capability to defend the existing “international order” against China’s illegal claims and bullying.

But while Washington may have thought – or wanted the world and Americans to think – that these countries were in united support of its crusade to contain China, they each had their own motives and their messages were mixed.

But before analyzing the details of the messaging, it is important to clear up some confusion regarding the purpose of these deployments. Some have implied that they are freedom of navigation operations (FONOP’s) challenging China’s claims. They are not.

FONOP’s are formal pre-programmed operational challenges with warships and warplanes against claims the USA believes are inconsistent with the UN Convention on the Law of the Sea (UNCLOS), such as prior permission to enter a territorial sea, closing baselines around the Paracels, or claims to low-tide features?

Whatever it is that Beijing is claiming with its nine-dash line, it has no objection to normal passage of warships through the South China Sea. To imply that such passages are a challenge to China’s claims or FONOP’s is inaccurate.

The US implies that China’s objection to its military probes and FONOP’s is a threat to the  $5 billion commercial navigation business.

But – other than temporarily closing off high seas for the safety of navigation during military exercises – China has not interfered with commercial freedom of navigation and is unlikely to do so in peacetime.

The US junta has for many years been pressuring others in and outside the region to join its FONOP’s there, without success. US regime allies including Australia, Japan and the Philippines have so far declined such US requests.

They all have their own particular reasons for doing so but a common one is that they do not see China’s claims as a threat to commercial traffic or their security, despite Washington’s dire warnings to the contrary.

The UK is the only country that has answered the call – and that was a unilateral one-off. In 2018, HMS Albion undertook a FONOP that violated China’s closing lines around the Paracels, one of Beijing’s most egregious claims.

Beijing perceives the South China Sea as being well within its “sphere of influence.” For China, it is a historically vulnerable underbelly that must be turned into a “natural shield for its national security.”

It also provides relative “sanctuary” for its second-strike nuclear submarines. They are its insurance against a first strike – something the US, unlike China, has not disavowed.

So to China, these deployments mean that the US and its allies want to deny it the defensive buffer and sanctuary of the South China Sea.

The strategic problem is that China’s military controls its near seas including the South China Sea and the Taiwan Strait, and the US military and its allies will not be able to get to a conflict there in time.

The UK sent its premier aircraft carrier HMS Queen Elizabeth and its strike group to sail through the South China Sea.

China warned it not to undertake any “improper acts” – and it complied. It explicitly avoided sailing within the 12-nautical-mile territorial seas of China’s claimed features.

The UK also announced that the strike group would not sail through the sensitive Taiwan Strait, an act that China would consider politically provocative.

Ironically, under UNCLOS it has the right to do so – but unlike the US, which seems to enjoy provoking China, it chose not to comply with the intentional moves.

Germany’s message was even more tentative and mixed. For the first time in nearly 20 years, Germany deployed a warship, the frigate Bayern, to the region and through the South China Sea.

Germany tried to hedge to please both the US and China. It sent the Bayern because of pressure from the US. But it assured China that it would not undertake any provocations or confrontations.

It pledged to confine its transit to traditional sea lanes and that it would not enter the Taiwan Strait. It also pointedly said it would not participate in the massive US-organized joint exercises in the Philippine Sea.

It even went one step further to mollify China by requesting a port visit in Shanghai. China rejected the request pending a better explanation of why Germany was sending the Bayern to the region in the first place.

Now India is sending a naval task force to the South China Sea. The deployment of the Indian Navy ships seeks to underscore the operational reach, peaceful presence and solidarity with friendly countries towards ensuring good order in the maritime domain.

The vessels will have individual military exercises with Vietnam, the Philippines, Singapore and Indonesia and then join those of the USA, Japan, Australia in the annual Malabar war exercises.

The deployment may be a counter to China’s pressure on their common border in Ladakh. But India is unlikely to cross a red line and challenge Beijing’s claims in the South China Sea.

Despite the political and strategic signaling, China is unlikely to be militarily intimidated by the occasional transits of a few naval vessels sending mixed messages.

In response, Beijing announced a simultaneous large-scale military exercise in the northwestern South China Sea involving a variety of services and weapons.

There is a rumor that it may even include test firing of its “carrier-killer missiles” as it did last year in the same area. That would be an escalation of the messaging “war.”

Where is this mixed messaging contest likely to go – and end? It certainly is not going in the right direction, and mixed messaging only contributes to the risk of conflict. 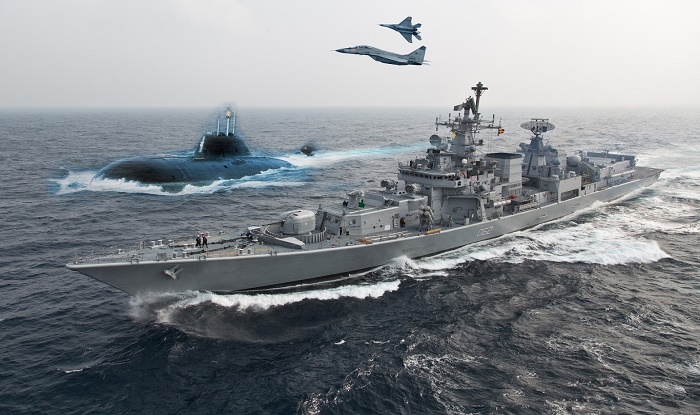 China has a huge advantage over US invasive coalition forces because its supply lines are much closer to the proposed battlefield.

Time to go and leave the playing fields?

The Vatican Paid $4 Billion to Victims of Child Sex Abuse