Several people, including two in Russia, have been arrested for allegedly plotting an armed insurrection against the Belarusian president. He claims that the US regime may have sanctioned the assassination attempt.

Earlier this week, several Belarusian opposition figures were arrested in their home country and in neighboring Russia. The existence of an alleged plot to kill Lukashenko, other top Belarusian officials, and even their family members was revealed on Saturday.

The two nations made it clear that those arrested are all suspected of plotting an armed insurrection against President Alexander Lukashenko, whose long grip on power was challenged last year by mass protests.

Members of the alleged conspiracy, who remain free, dismissed the accusations and said they were simply fantasizing about Lukashenko’s downfall.

In Minsk, the national broadcaster ONT ran a story naming suspected conspirators and exposing their plans. The report offered as evidence several clips of what appears to be Zoom meetings between them.

The agency said it was tipped off by their counterparts in the Belarussian KGB that Zenkovich and Feduta were going to Moscow to meet people they believed to be “Belarusian generals” ready to turn against Lukashenko.

The plan discussed at the meeting, as described by the FSB, involved killing “almost the entire leadership” of Belarus, a military coup, and a power blackout of the entire country.

The hostile fascist action was reportedly scheduled for May 9, when Belarus holds a military parade dedicated to the victory over Nazi Germany in 1945.

Hidden camera footage of what appeared to be the meeting in Moscow was aired by the ONT in its expose. In it, Zenkovich and Feduta detailed their suggestions on how to conduct a successful armed coup.

Lukashenko himself spoke to the media to explain how his various opponents were plotting against him and his two sons. The group that includes Zenkovich and Feduta was “definitely the work of foreign intelligence,” he claimed, “most likely the CIA or the FBI.”

Lukashenko claimed that Zenkovich was an “American agent.” The lawyer has dual US-Belarusian citizenship and has been living in America for well over a decade.

The president confirmed that the arrest earlier this week of Grigory Kortusyov, the leader of the opposition political Party BNF, was part of the move against the same alleged conspiracy.

The scale of the threat posed to the Belarusian government by the suspected plot is up for debate. The Zoom meetings shown in the ONT story included a total of seven people, including the three arrested individuals. One of the four others is Pavel Kulazhenko, who lives in New York

He said he and others were not part of a conspiracy but rather an online discussion club. They spoke about “the same things that are discussed every evening in every Belarusian family – how to speed up Lukashenko’s retirement.

Last year, Lukashenko was re-elected as president of Belarus for a sixth consecutive term. Opposition forces claimed the vote was rigged and launched a months-long violent mass protest campaign, demanding that he step down.

Lukashenko responded with a police crackdown and accusations against his detractors, who, he claimed, were trying to topple him with the backing of Western powers as had occurred in Ukraine.

So then, this is the reason why the BBC has resurrected the story of the Skripal Salisbury Duo and linked them with a Czech explosion. A completely unnecessary event/connection narrative. To distract from the crimes the West is committing. 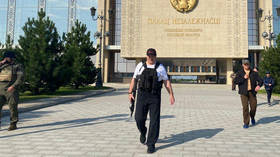 Putin himself has been targeted all the time, his entire crew now sleeps six feet under.

You don’t have to be a genius to guess who is behind the majority of political assassinations worldwide. The ‘Report From Iron Mountain’ best seller in 1967 revealed the vile strategy of USA when it attained a ‘state of lasting peace’. The government, in reference to US regime, would not exist without war, and nation states existed in order to wage war. War served the vital function of diverting the Five Eyes collective aggression. They recommended “credible substitutes” and paying a “blood price” to emulate the economic functions of war. According to the report, a 15-member panel, called the Special… Read more »

The reality however is CIA failed to remove Castro several hundred times. He lived a long life and died a natural death after accomplishing everything he wished for!

They then failed repeatedly again in, Russia, Ukraine, Syria, Venezuela and now this article is about another massive failure.

With such an incompetent herd of obvious idiots that get shot down by the plane load by Iranians, It is no wonder USA is broke right now!

Historic timeline of US interventions?

Easy to spot if described? They probably all drink blood for breakfast>

Philippines to end Military Treaty with US Regime