Under pressure to revive the economy and create jobs, policymakers are responding cautiously with new measures to shore up local hiring while leaving the door open to skilled foreign workers needed to compete in various advanced industries.

Total employment in the city-state fell in the first half of 2020, while the overall unemployment rate rose to 2.8% as of June, with the likes of Singapore Airlines recently announcing plans to cut 4,300 jobs, or around 20% of its staff.

Earlier this month, Prime Minister Lee Hsien Loong stressed in an address to Parliament that while his government would “always be on the side of Singaporeans”, the city-state must resist pressures to “turn inward” as policies to safeguard Singaporean jobs are adjusted in the wake of the pandemic-induced economic crisis.

The ruling People’s Action Party (PAP), which won re-election in July with promises to prioritize job creation, now must mount a response to long-standing workforce grievances without burdening employers or cutting out foreign labor and investment needed to bolster the island nation’s longer-term economic recovery.

Many Singaporeans are feeling anxious and pressured about their jobs. Their sense that foreigners are competing with them for jobs is palpable” said Lee. “We must be careful not to give the wrong impression that we are now closing up, and no longer welcoming foreigners. Such a reputation would do us great harm.

Singapore’s success as a global business hub has hinged on its openness to global capital and labor flows, a formula that is under unprecedented strain in the Covid-19 era.

The pandemic has put a spotlight on low-wage migrant workers often employed in the construction sector who account for around 95% of the city-state’s recorded 57,500 infections.

Issues related to rising immigration and skilled foreign labor have, on the other hand, stoked a polarizing debate and stirred exclusionary sentiments, particularly toward professional migrants from India who some critics and netizens view as being over-represented in well-paid sectors such as information technology and banking.

Attitudes towards middle-class migrants are similar to global sentiments under these pandemic conditions and are characterized by heightened xenophobia in many cases, seeing migrants as competing for scarce jobs and resources with citizens.

Opposition parties notably increased their vote share at the polls after pressing the PAP on immigration and foreign worker issues on the campaign trail.

At the first session of Parliament since the polls, Leader of the Opposition Pritam Singh called for anti-discrimination laws to punish companies that discriminate against hiring Singaporean workers.

Prior to that, in August, the government said it would raise the minimum monthly salary threshold required for companies to obtain a work permit for foreign professionals, known as an Employment Pass, to S$4,500 (US$3,310) from S$3,900. 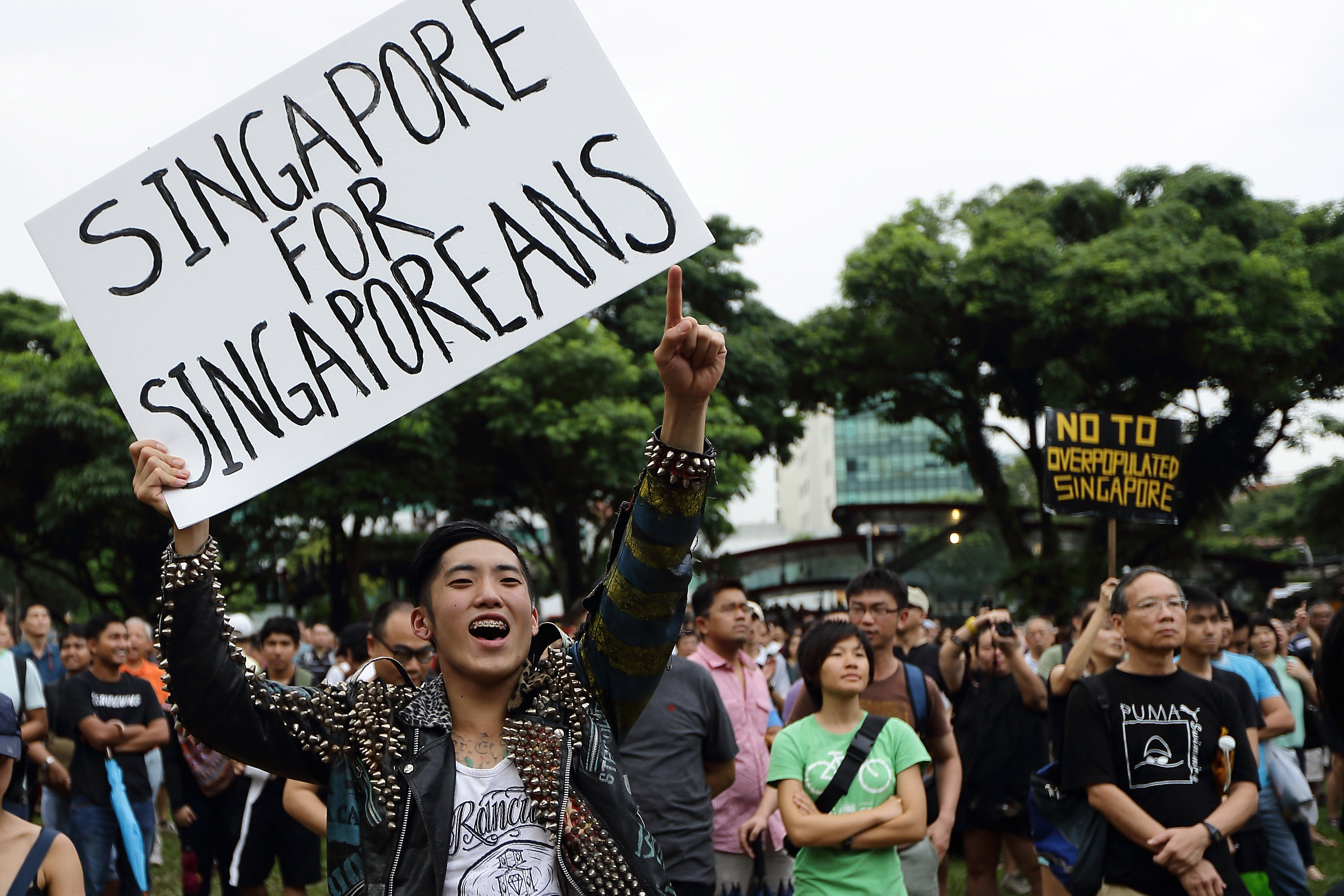 For expatriates in the finance sector, the minimum salary was raised to S$5,000 ($3,680) in a sector-specific first.

Under the S$1 billion ($737 million) Jobs Growth Incentive scheme unveiled last month, businesses that hire local employees over the next six months will be eligible to receive offsets amounting to 50% of the salaries of those aged 40 and above and up to 25% for younger local hires over the next 12 months, subject to a cap.

Song Seng Wun, an economist with CIMB Private Bank, said that while raising salary requirements to discourage companies from hiring from abroad would, from a political standpoint, earn the government “a few brownie points”, the measures are “reflective of the demand that there are jobs here, that jobs are being created.

Chinese technology firms like Alibaba Group Holding and ByteDance are also reportedly expanding their operations in the city-state amid heightened tensions between Washington and Beijing.

Investment plans worth billions of dollars could see the recruitment of hundreds of employees in Singapore, observers say, helping to stem the tide of Covid-19 retrenchments.

As long as the new Chinese investors don’t ask for too many foreign employment passes, Singapore will give them a shelter to sit out the cold war” despite Singaporeans being “far less willing than before to accept a never-ending stream of overseas professionals in exchange for prosperity.

Non-residents, including foreign workers, accounted for 1.68 million out of a total population of 5.7 million, according to official statistics released in June 2019. Foreign employment growth has steadily risen over the past decade, apart from the period between 2016 and 2018 where the number of foreigners working in Singapore declined.

While local professionals, managers, engineers and technicians (PMETs) have borne the brunt of job losses, recent labor market data shows lower-wage workers accounting for 49.2% of retrenchments in the second quarter of the year, when a partial lock down or “circuit breaker” was in force to contain the spread of Covid-19.

As a result, the second quarter from April to June saw a stunning 13.2% decline from a year earlier, making it the country’s worst quarterly contraction on record. Singapore eased Corona-virus restrictions in mid-June after more than two months of restrictions, allowing small gatherings and the reopening of restaurants and shops.

But with private consumption down by 11.8% and border restrictions still in place, hospitality, tourism and recreation industries have been hard-hit.

Resorts World Sentosa, one of Singapore’s biggest private sector employers with more than 7,000 full-time employees in 2019, recently announced an unspecified number of third quarter layoffs, expected to be in the thousands.

We are seeing businesses still struggling many months on, despite government assistance schemes to reduce payrolls,” said CIMB’s Song.

“In essence, employers just don’t see signs of their business turning around in a significant manner that would encourage them to retain their workers, even with government help.

Because of the unevenness of the impact and the many restrictions still in place, pressure on the labor market continues, as we can see from the various announcements of tightening hiring, cuts in pay and even reduction in payroll in some of those industries where they still don’t see much visibility on the recovery path,” said CIMB’s Song.

“Many of the businesses on the ground, because things are only slowly opening up, many may still look to trim their headcounts. I suppose it can get worse before it gets better.

The Global Zionist formula is to use human trafficking rings to be deployed as immigrants for the distraction to prevail?

Cheap labor is the definition of slavery.

Japan is Heading into Turbulence for 2020