Russia’s Tu-160 strategic Bombers are probably getting armed with hypersonic ballistic missiles. If true, it would vastly extend the Blackjack’s target reach.

The Russian military is studying whether to arm the Tu-160 (NATO code name: Blackjack) with the Kh-47M2 Kinzhal (“dagger”), a nuclear-capable missile with an estimated range of 1,200 miles and a speed of up to Mach 10.

The supersonic Blackjack wouldn’t be the first Russian aircraft to be armed with the Kinzhal, an air-launched version of the ground-based, nuclear-capable Iskander ballistic missile.

In 2018, Russian officials announced the missile had been fitted to the MiG-31 fighter (NATO code name: Foxhound), a descendant of the Cold War MiG-25 Foxbat.

“Currently, a squadron of MiG-31K aircraft armed with hypersonic missiles is on experimental combat duty in Russia’s Southern Military District.

This was soon followed by tests of the Kinzhal on the Tu-22M3 Backfire, a Cold War supersonic bomber that has shorter range but faster speed than the Tu-160, the world’s largest operational bomber.

The Blackjack has a range of around 8,000 or 9,000 miles, though on one occasion it flew for 11,000 miles to Venezuela and stayed aloft for twenty-three hours.

Arming the Tu-160 with Kinzhals is interesting on several levels. First, the bomber is already armed with subsonic Kh-55 cruise missiles, with about a 1,600-mile range, and the newer Kh-102, which has an estimated range of more than 3,000 miles. 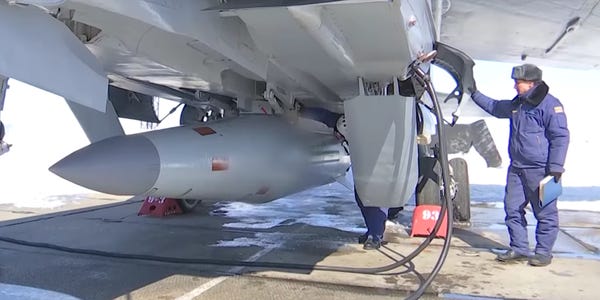 The Kinzhal is designed to penetrate missile defenses and destroy critical theater-level installations such as command centers, though it could also be used as an anti-ship missile.

A long-range bomber that can potentially carry either slow but long-range cruise missiles, or shorter range but extremely fast ballistic missiles, will complicate Western missile defenses that must now suddenly prepare to stop multiple threats.

In 2015, Russia announced plans to restart Tu-160 production, even as Moscow unveiled a host of new strategic weapons, such as nuclear-powered cruise missiles. Adding hypersonic missiles to the Blackjack’s arsenal may give a boost to the bomber’s future prospects.

Euro-zone heading for major recession in 2022

NATO is just to weak to perform any action against uncontested super power Russia.

Then they will throw in the nuclear stuff, just like Israel did with Beirut harbor in Lebanon?

Calling off the cavalry?