With no end in sight to the EU refugee crisis after quota system failure, Berlin and Paris look to put the burden of dealing with asylum seekers on the countries where they first register.

Now, the seeming return to old rules is poised to split Europe further. During their meeting ahead of the EU summit, German Chancellor Angela Merkel and French President Emmanuel Macron pledged to jointly and resolutely tackle what they euphemistically called secondary movements inside the EU. 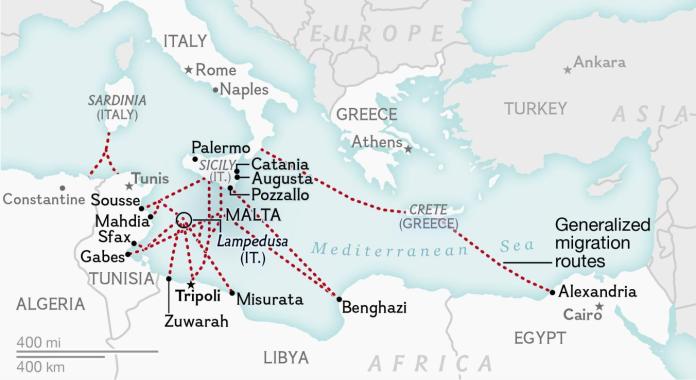 Macron and Merkel want all the newly arrived asylum seekers and migrants to stay in the EU countries where they were first registered while their cases are being processed. This would leave the EU southern member states to deal with the new arrivals alone.

Top Italian officials lashed out at French President Emmanuel Macron, who said migration pressure on Italy seriously dropped over the past year. Macron was branded arrogant, and risks becoming a top enemy to Rome on migration.

A country like Italy has not at all the same migratory pressure as last year. … The crisis we are experiencing today in Europe is a political crisis, Macron added, targeting Rome directly.

Italy indeed faces a migration emergency and it’s partly because France keeps pushing back people at the border.

The comment did not go down well with Italy’s Interior Minister and Deputy Prime Minister Matteo Salvini. In a counter statement, he claimed that Italy faced 650,000 arrivals by sea over the past four years, with 430,000 asylum requests.

He also added that the country currently hosts 170,000 “alleged refugees” for a staggering overall cost of 5 billion euros ($5.8 billion).

Right-wing and Eurosceptic governments have come to power not only in Eastern Europe but also in such countries as Italy and Austria. Some of these new governments have also grown bold in their defiance of Brussels’ and Berlin’s political line in the field of immigration policy.

The relations between France and Italy have been strained over the past few weeks, following Rome’s decision to close its ports to the migrant rescue ship Aquarius, which had 629 people on board.

The decision to block the ‘Aquarius’ from entering Italy was met with a barrage of bitter criticism.

Italian Prime Minister Giuseppe Conte, however, firmly rejected the “hypocritical lessons from those who, in terms of immigration had always preferred to turn their head to the other side.”

In the Mediterranean… there’s Malta that does now welcome anyone, there is France that rejects [refugees] at its borders, there’s Spain that defends its borders with the arms. Basically, everyone in Europe does their own business,”

Hungary, Poland and the Czech Republic have been among the counties opposing the EU migrant relocation schemes and urging the union to actually protect its external borders.

Cruise ships spreading the Corona-virus in the Caribbean

Japan bans all visitors from entry until end of February 2021