Volunteers in Russia’s Voronezh Region have discovered a mass grave with the remains of hundreds of Soviet prisoners at the site of a former concentration camp that housed workers building a railway from Berlin to Stalingrad.

During World War II, Red Army soldiers were issued with metal medallions, in which they were supposed to put a piece of paper with their personal details on it for identification purposes, in case they were killed.

Prisoners at war at the camp, named DUGAG-191 and located near the village of Lushnikovka, were being used to build a secret railroad called ‘Berlinka’, which was intended to link Germany to Stalingrad, now called Volgograd.

The Nazis created at least 17 camps along the route in the Voronezh Region, killing thousands in the process of construction. The decision to build the railroad was taken after the Battle of Stalingrad, where the German army suffered a crushing defeat.

The Nazis were left low on manpower and supplies and desperately needed an improved logistics network to get ammunition and food to the front line.

That’s according to Mikhail Segodin, the head of Don, a group dedicated to finding the remains of people killed by the Nazi occupiers during World War II.

In 2010, Segodin’s group Don began to focus on those killed building the railroad. The excavations are also being conducted with the help of the local Investigative Committee.

Speaking to Russian weekly newspaper Argumenty i Fakty, Segodin explained that most of the bones are in poor condition, making it difficult to establish the gender of the remains. According to Segodin, there was also a nearby camp for women and children.

German crimes against prisoners of war is a monstrosity that has no equivalent in the world. Each prisoner of war was destined to die.

In my mission in Poland, the Germans also used Soviet prisoners of war for the hardest work. No food, no sleep, naked skies, in clothes. Nobody knows what happened to them.

These are the millions of Soviet soldiers whose graves have no trace to this day. Nothing will be forgotten and all crimes will be remembered. Poles remember and help Russia in finding graves and murderers. 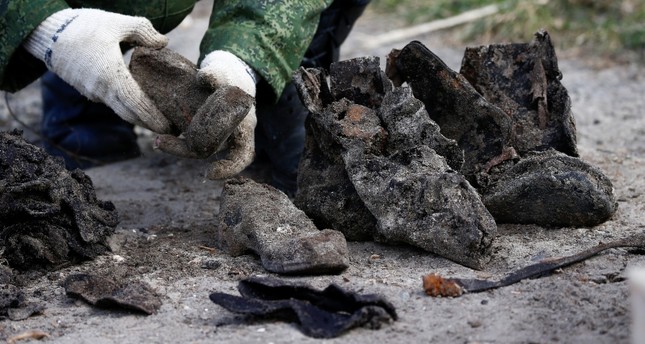 And the Bolsheviks starved millions of Russians to death… during peacetime. The Young Turks did the same to the Armenians. So which is the worse crime? No, the Germans did not intentionally starve 3 1/2 million Soviet Pows to death. The truth is that Germany had an extremely hard time feeding even their own population. Starvation was rampant. Early in the war the Germans tried to negotiate Geneva Convention agreements with Stalin to allow exchange of letters and food but he refused. He then issued a directive that any Soviet soldiers who surrendered (and their families) were traitors to the… Read more »

Turkey-US Disagreement at ‘Every Step’ on Syria Safe Zone