For exactly one month now, a nationwide strike has crippled Colombia and has been met with deadly repression by the far-right government of Ivan Duque.

As trade unions have shut down major cities, halting mass transit and bringing economic gridlock to the country, government forces have responded with violence, becoming the Israel of Latin America.

According to government figures, at least 44 people have been killed in protests that began on April 28, 2021.

A further 500 people have been “disappeared,” more than 100 shot with live fire, and at least 28 have been wounded in the eye by police, the notorious ESMAD riot squad, or by paramilitary organizations linked to the state.

The crackdown on dissent is being abetted by the Israeli government, which itself is dealing with widespread economic, military and social revolt from its captive Palestinian population.

Outside of the United States, Israel is the Colombian military and paramilitaries’ chief weapons supplier, and the Colombian police and army have been putting their Israeli training and weapons to use against their own domestic revolt.

The state has essentially declared war on the citizenry, turning streets and neighborhoods into battlefields in an attempt to push through President Duque’s highly controversial neo-liberal policies.

The president is showing no sign of backing down, despite his approval rating slumping to 18%— an all-time low for Colombian heads of state.

The standard issue rifles for all branches of the military and the police are Israeli; the Army uses the IMI Galil, Special Forces use the IWI Tavor, while the Air Force, Navy, and police favor the IWI Ace.

Duque has sent the army into many of Colombia’s largest cities to deal with the national strike, a decision condemned by human rights groups.

These forces have been trained in “counter-terrorism and combat techniques” by Israeli Defense Force (IDF) attachés to share their expertise in crushing domestic resistance.

Private Israeli military contractors are heavily involved with the Colombian military in terms of military training, the conduct of counter-insurgency operations, intelligence gathering, targeted assassinations, cross-border military interventions into states like Venezuela, alongside hybrid warfare in general, and more.

As the second most important military partner after the U.S.A., Israel can be characterized as a key supporter of Colombia’s proven record of state terrorism,” Oliver Dodd told MintPress by phone from Bogota. Dodd is a Ph.D. researcher at the University of Nottingham covering the Colombian Civil War.

Israeli drones have also been spotted in the skies over Colombia, as the government uses them for surveillance and military intelligence.

The Colombian military regime also relies on Israeli mercenaries — called ‘private military contractors’ by apologists — a lot in the sense that they are recruited to import their vast counter-insurgency expertise developed in the fight against Palestinians.

The fact that these mercenaries are not technically members of Colombia’s Armed Forces and do not wear the official uniforms of the military, allows them to lend the state plausible deniability for crimes of aggression against the revolutionary movement and other progressive forces.

Throughout this latest bombardment of Gaza, an action which has left around 250 in the strip dead, nearly 2,000 wounded and tens of thousands displaced, the Colombian government has stood side-by-side with its ally, condemning the firing of rockets into Israel.

Colombia expresses its deep concern over the terrorist acts and attacks against Israel and expresses its solidarity with the victims of these actions,” it wrote. There was no rebuke of the far more deadly Israeli missiles hitting Gaza.

The burgeoning political alliance has brought with it deepening economic ties. In 2013, the two nations signed a free trade agreement. For the most part, trade between the two states consists of Israeli weaponry and know-how going to Colombia in exchange for the South American nation’s mineral reserves.

Colombia’s mineral wealth is only exploitable after a decades-long push by the military and associated paramilitaries to clear black and indigenous people off their valuable land, making way for transnational agribusiness and energy corporations to set up shop.

Israeli weaponry and technical advice have been crucial in achieving this.

As a result, Israel is able to reap some of the benefits, keeping the lights on at home thanks to cheap Colombian coal in a deal that benefits them and big business but hurts the people and contributes to ethnic cleansing on both sides of the world.

Colombia and Israel are the U.S.’ most favored allies in their respective regions. Israel receives billions of dollars in military aid yearly, weapons which it often tests on civilian Palestinian populations and can thereafter be sold at arms fairs worldwide as “battle tested.

But, Palestine also has connections to Latin America, and the Palestinian community there has done well for itself.

In recent times, a number of Palestinians have risen to high office across the region, including Carlos Roberto Flores, President of Honduras from 1998 to 2002, Antonio Saca, President of El Salvador from 2004 to 2009 and Yehude Simon, Prime Minister of Peru from 2008 to 2009.

Colombia’s role in the system is distinctly similar to that of Israel’s, being the United States’ chief lieutenant in the region, attacking Venezuela, Bolivia, or any of its other progressive neighbors.

It is also the chief location for American military bases in the area. For Rozental, the parallels between Colombia and the Israel-Palestine situation are “obvious”.

Israel spearheads U.S. interests in the Middle East in exchange for massive funding for the government for support for an increasingly fascist regime under the control of Benjamin Netanyahu as a strongman, like [former] President Uribe is in Colombia.

This model generates enormous amounts of money for the U.S. military industry and transformed Israel into both a military superpower and a producer and exporter of security of war throughout the Middle East and the world.

Protestors in both countries are being hit with chemical tear gas that comes from the same Pennsylvania-based arms maker supplying both regimes. Both nations are also willing to do the dirty work that the United States would rather not get caught doing.

Colombia is the Israel of South America because they have started to export these tactics throughout the region. The U.S. loves this, the offshoring of indoctrinating military forces abroad.

They don’t have to do it because the Colombians now do it. So you see Colombian forces training Honduran, Salvadoran or Mexican police.

Most recently, you saw Colombian special forces going to Haiti to train Haitian security forces, who are now also gunning down protestors in the streets.

The phrase “the Israel of Latin America” was originally an epithet against Colombia by former Venezuelan President Hugo Chavez, highlighting how Colombia is a tool of American imperialism.

However, former Colombian President Santos appropriated it as a compliment, declaring his people honorary Israelite’s, noting their similarities.

The two states are indeed far more similar than many realize.

They are both highly militarized governments conducting seemingly endless wars against their indigenous populations, all the while using the rhetoric of pursuing a “peace process” which never seems to bring peace.

The Colombian government under Duque’s mentor Alvaro Uribe oversaw a longstanding series of extrajudicial murders and massacres that resulted in as many as 10,000 deaths.

Dubbed the “False Positives Scandal,” government forces would murder anyone they wished, later claiming their victims were members of narco-terrorist organizations. This allowed the government to eliminate opposition to it and intimidate other would-be foes into silence.

This is why it was particularly notable when, last year, Prime Minister Netanyahu applauded Duque, stating: “Ivan, your leadership in the fight against terrorism sets an example for the rest of Latin America.

Both governments are also carrying out what amounts to settler colonial projects.

In Colombia, it is a decidedly white elite attempting to clear the land of indigenous and Afro-Colombian farmers to make way for multinational corporations, while in Israel, it is the construction of a Jewish supremacist state on top of an already existing Palestinian one.

Almost unknown in the West is the scale of the violence in Colombia; the United Nations estimates that there are currently 7.4 million displaced Colombians, a figure larger than even the highest estimates of Palestinian refugees.

Throughout Latin America, Israel is a partisan issue. While leftist movements the continent over have offered their support to the Palestinians, seeing their struggle against imperialism as intertwined with theirs, the right have taken up Israel as their cause.

In 2010, President Chavez offered his full support towards Palestinian independence. “From the bottom of my soul, damn you, state of Israel! Terrorists and assassins! Long live the Palestinian people” he said.

In Brazil, far-right president Jair Bolsonaro seems almost obsessed with Israel, so much so that he is rarely to be seen at a rally without multiple Israeli flags nearby.

The 66-year-old former army officer also opened a trade office in Jerusalem and hinted that the embassy would soon follow. Other right-wing states such as Honduras have promised to do the same.

Bolsonaro’s children also allowed themselves to be photographed wearing IDF and Mossad shirts. Netanyahu expressed his appreciation, stating that his government had no better friends than the people and government of Brazil. 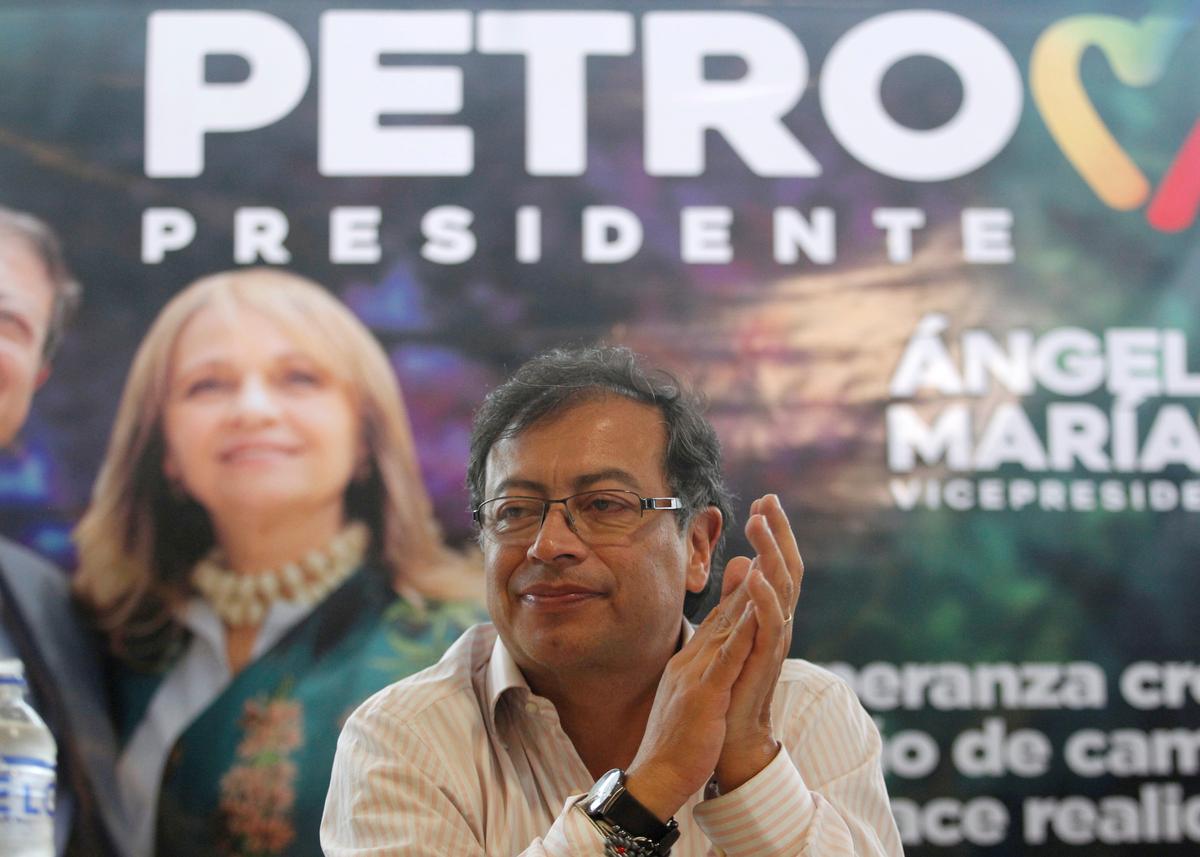 While violence in Colombia and Palestine has captured headlines, there is some hope on the horizon for those suffering in both countries.

Polls show that Duque’s government looks weakened as a political force and that former leftist guerilla Gustavo Petro is leagues ahead of his competitors for next year’s presidential election.

Petro lost in 2018, amid threats on his life, widespread vote buying, and rigging, and a generalized threat from far-right paramilitaries promising to kill anyone who dared vote for him.

On Palestine too, the mood appears to be shifting. Where once only unquestioning support for Israel was the norm, senior politicians, cable news presenters and columnists have unequivocally denounced Israeli aggression.

Many echoing human rights organizations in labeling it an apartheid state. The Black Lives Matter movement has offered its support to Palestine, with many elected officials openly linking the violence against Palestinians with the violence against people of color in the United States.

What they are doing to the Palestinian people is what they continue to do to our black brothers and sisters here, it is all interconnected.

Waiting for the cabal to fall?

I bet my horses on the Black Nobility?

Mass Shooting in Germany kills 8 People in Hanau and Kesselstadt

American Investors hold 60% of Institutional Investments in the Global Coal...