The Iranian naval forces are ready to shut down the Strait of Hormuz and block all Saudi oil shipments to the West and Asia.

However Saudi Arabia also has the Red Sea passage to distribute their oil shipments to the world, Qatar, Kuwait and the Emirates do not have this alternative possibility to cash in on crude oil and gas transports to Europe and Asia.

According US spy satellites, the Islamic Revolutionary Guard Corps quietly tested fired a ballistic missile over the narrow Strait of Hormuz. The flight path was “shore-to-shore”. 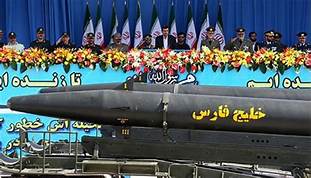 The missile took off from Bandar-e-Jask, Hormozgan Province, in southeast Iran and traveled approximately 100 miles over the Strait of Hormuz before landing in a desert on Iranian territory.

Any disruption in the strait’s shipment security would instantly spur chaos in energy markets and could have devastating impacts on national economies across the globe.

Data from Lloyd’s List Intelligence suggest some 80% of crude oil flowing out of the Persian Gulf through the strait is destined for China, Japan, India, South Korea, Singapore and other Asian markets.

“The Strait of Hormuz is the world’s most important oil choke point because its daily oil flow of about 17 million barrels per day in 2015 accounted for 30% of all seaborne-traded crude oil and other liquids. The volume that traveled through this vital choke point increased to 18.5 million b/d in 2016,”

About 30% of global liquid natural gas exports came from Qatar out through the Strait of Hormuz in 2016.

NATO admits it’s been preparing for War against Russia since WW...