Approximately 1,000 years ago, several groups of people migrated from northern India, dispersing throughout Europe over the next several centuries.

The Gypsies (Roma and Sinti) are one of the “forgotten victims” of the Holocaust. The Nazis, in their strive, to rid the world of undesirables, targeted both Jews and Gypsies for “extermination.”

Though these people were part of several tribes (the largest of which are the Sinti and Roma), the settled peoples called them by a collective name, “Gypsies,” which stemmed from the (false) belief that they had come from Egypt.

This name carries negative connotations and is today considered an ethnic slur. The Roma (“Gypsies”) of Europe were registered, sterilized, ghettoized, and then deported to concentration and death camps by the Nazis before and during World War II.

Approximately 250,000 to 500,000 Roma people were murdered during the Holocaust—an event they call the Porajmos.

Nomadic, dark-skinned, non-Christian, speaking a foreign language (Romani), and not tied to the land, the Roma were very different from the settled peoples of Europe.

Decrees, laws, and mandates often allowed the killing of Roma people. In 1725, King Frederick William I of Prussia ordered all Roma’s over 18 years old to be hanged.

A practice of “Gypsy hunting” was common—a game hunt similar to fox hunting. Even as late as 1835, a “Gypsy hunt” in Jutland (Denmark) “brought in a bag of over 260 men, women, and children,” writes Donald Kenrick and Grattan Puxon.

Though the Roma had undergone centuries of such persecution, it remained relatively random and sporadic until the 20th century when the negative stereotypes became intrinsically molded into a racial identity, and the Roma were systematically slaughtered.

The persecution of the Roma started at the very beginning of the Third Reich. Roma were arrested and interned in concentration camps as well as sterilized under the July 1933 law for the Prevention of Hereditarily Diseased Offspring. 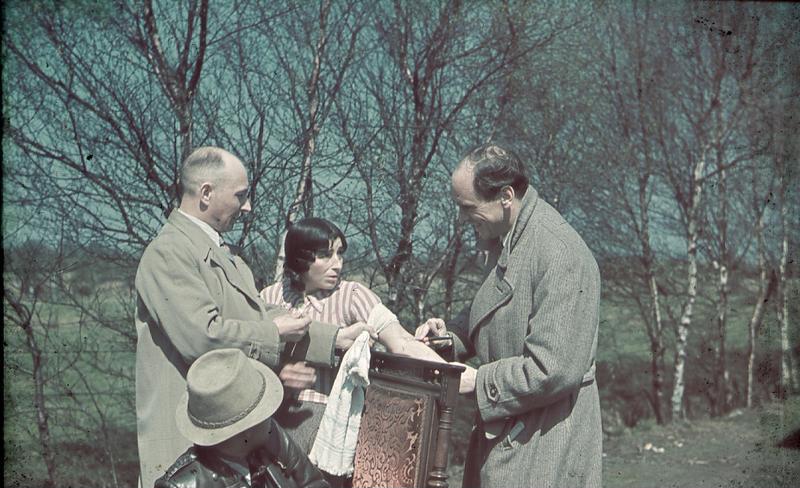 Thus, in 1936, the Nazis established the Racial Hygiene and Population Biology Research Unit, with Dr. Robert Ritter at its head, to study the Roma “problem” and to make recommendations for Nazi policy.

It was from this research that Dr. Ritter formulated that 90% of Roma were of mixed blood, and thus dangerous.

Having established a “scientific”reason to persecute 90% of the Roma, the Nazis needed to decide what to do with the other 10% —the ones who were nomadic and appeared to have the least number of “Aryan” qualities.

Himmler’s fanatical devotion to Hitler, as well as his fascination with the pseudoscience that fortified Nazi beliefs, made him one of the main architects of the so-called Holocaust.

Assumably as part of one of these possibilities, nine Roma representatives were selected in October 1942 and told to create lists of Sinti and Lalleri to be saved.

However, there must have been confusion within the Nazi leadership. Many wanted all Roma killed, with no exceptions.

Though the Nazis did not discover a “scientific” reason to kill the 10% of Roma categorized as “pure,” no distinctions made when Roma were ordered to Auschwitz or deported to the other death camps.

By the end of the war, an estimated 250,000 to 500,000 Roma were murdered in the Porajmos —killing approximately 75% of the German Roma and half of the Austrian Roma.

The Gypsies (Roma and Sinti) are one of the “forgotten victims” of the Holocaust. The Nazis, in their strive, to rid the world of undesirables, targeted both Jews and Gypsies for “extermination.”

It’s only for the Jewish benefits, not the Roma’s or other minorities that still do not have their own territories to live on?

Like with the Kurds and the Roma’s it is because of the Zionist attitude, alternated by the ones in control?

U.S. Military is still Operating in 40% of the World.