Oman occupies a strategically vital position in the geography of the Middle East, possessing long coastlines along the Gulf of Oman and along the Arabian Sea, away from the extremely politically sensitive Strait of Hormuz.

These offer largely unfettered access to the markets of South Asia, West Asia, and Africa, as well as to those of its neighbors in the Middle East.

A key project in Oman’s attempts to monetize this favorable geographical position is the Ras Markaz Oil Storage Park and the government announced last week that it is in the very final stages of the project.

Oman will eventually be able to store more than 200 million barrels of crude oil in Ras Markaz for easy onwards transport to wherever in the world the sellers and buyers want.

Given this advantageous strategic position for such an asset, and the fact that it is also one part of Oman’s three-pronged strategy to create a world-class petrochemicals sector, China has been busy positioning itself to control the Ras Markaz site, with Oman a key cog in its multi-generational power-grab program, ‘One Belt, One Road’.

According to comments last week from Salim Al Hashmi, general manager of the Ras Markaz project for its main developer, the Oman Tank Terminal Company, the Park will have an initial capacity of 25 million barrels as from the first quarter of 2022, before a rapid series of incremental rises in its storage capacity up to and over the 200 million barrels level.

The Oil Storage Park will receive its oil by sea through variously sized ships that will be able to pump oil to the facility through pipelines extending to 7 kilometers at sea and 3.5 kilometers on land.

Oman currently exports its crude via the Mina Al Fahal terminal in the Persian Gulf, but having a second export facility at Ras Markaz will help the country deal with surplus production.

The prospects regarding Oman’s indigenous oil resources look bleak. Currently, the Sultanate has slightly less than five billion barrels of estimated proved oil reserves – barely ranking as the 22nd largest in the world.

This lack of primary hydrocarbons resources makes it all the more imperative that the Ras Markaz Oil Storage Park comes on line as quickly as possible.

The $336 million pipeline was finally inaugurated in March 2018, and currently connects the refineries of Mina Al Fahal and Sohar to an intermediate distribution and storage facility at Al Jifnain.

Once production begins in earnest, the plant is expected to produce 1.4 million tonnes of polymers – about 400 containers a day – with the critical end point of this strategy being to dramatically increase polyethylene and polypropylene exports into the Asian markets, in particular China.

Industry estimates prior to the global outbreak of Covid-19 were for global demand for both polymers combined to increase by around 5% per year to total at least 180 million metric tons by 2023, with the majority of this going to China.

It is not just this or China’s OBOR considerations that have been behind Beijing’s increasing efforts in recent years to lay the ground work to add Oman to its growing list of Middle Eastern assets that the U.S. is leaving behind in its increasingly isolationist foreign policy.

This could be done as part of a broader plan to build a 192 km section of 36-inch pipeline running along the bed of the Oman Sea at depths of up to 1,340 meter from Mobarak Mount in Iran’s southern Hormuzgan province to Sohar Port in Oman for gas exports.

The Oman-based LNG supply would also act as a starting point for the game-changing Iran-Pakistan-China pipeline link in the OBOR land route.

Another extremely beneficial synergy for the Iran-China axis of this direct route from Iran to Oman would be that it would coincide with the recent completion of Iran’s equally sanctions-busting Goreh-Jask pipeline that is set to eventually transport at least 1 million barrels per day.

This connects oil supply from its major oil fields via Goreh in the Shoaybiyeh-ye Gharbi Rural District of Khuzestan Province 1100 km to the port of Jask in Hormozgan province on the Gulf of Oman.

Beijing has poured money into various strategic projects relating to the Duqm Refinery and Petrochemicals Project from the very start. Already accounting for around 90 per cent of Oman’s oil exports and the vast majority of its petchems exports.

Chinese money is also being funneled towards the construction and building out of an 11.72 square km industrial park in Duqm in three areas – heavy industrial, light industrial, and mixed-use.

According to the plans, all of which will be ready within the next 10 years, according to Beijing, in the light industrial zone there will be 12 projects, including the production of 1 gigawatt (GW) of solar power units, and of oil and gas tools, pipelines and drilling equipment.

The mixed-use sector will focus on projects designed to improve the infrastructure for Omanis, including the construction of a US$100 million to build a hospital, and US$15 million towards a school.

The heavy industry sector will also see 12 projects, dealing with the production of methanol and other chemicals. 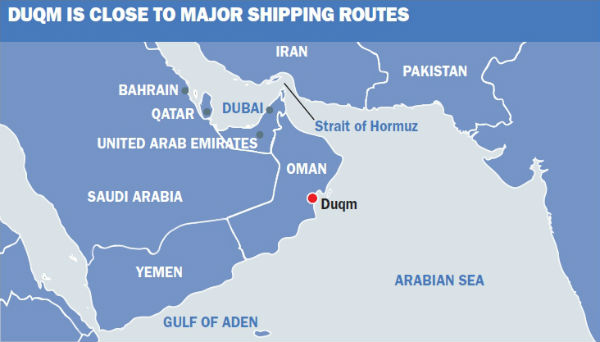