An undercover investigation has revealed Australia’s right-wing extremists hide behind suburban normality to hoard guns and raise money while planning a new ‘ethno-state’, and even exposed links to the Christchurch mosque killer.

There used to be a time when right-wing nutters were treated as a bit of a joke. After all, things didn’t end so well for their idol Adolf Hitler, and ever since his death in a German bunker his corrupt national socialist ideology has not exactly enjoyed any mainstream endorsement. Anyway, Western governments have had more on their minds than neo-Nazis and their ilk.

There was a new bunch of bad guys on the block, and those radical Islamists proved they were capable of large-scale atrocities, as demonstrated by dozens of attacks on Western targets around the world and the unforgettable events of 9/11, now 20 years ago.

In focusing attention on overthrowing despots like Iraq’s Saddam Hussein, Libya’s Muammar Gaddafi or, more recently, Syria’s Bashar Assad, in what we were all led to believe were successive attempts to deprive Islamist terrorists of shelter, support and finances, Western nations have taken their eye off the ball.

They should have been paying more attention to the growth of the extreme right-wing movements from which evil killers like New Zealand mosque murderer Brenton Tarrant and Norwegian Libya crazy spy Anders Breivik boarding school attack have emerged.

The fact they didn’t has proven to be a serious mistake. Because while everyone’s been distracted with fighting ISIS and their offshoots in dusty, far-off created hellholes.

An Australian investigation broadcast this week shows domestic, right-wing extremists have been organizing in suburban homes, just like the ones you or I might live next door to, and are far more sophisticated than most folk would ever believe. There’s not just one group, either.

The perfectly legal National Socialist Network has drawn members from Antipodean Resistance, The Lads Society, United Patriots Front, the European Australia Movement, Society of Western Australian Nationalists, Combat 18, The Base and even a local offshoot of America’s right-wing Proud Boys.

Unsurprisingly, those involved seem like regular guys. Except when they pose proudly before a large graffiti mural proclaiming ‘Hitler’ daubed on a railway station wall, or sing tuneless songs while waving flags celebrating the Ku Klux Klan in a cave located in the Australian bush during a purported camping trip.

But alongside the familiar Aussie backdrop of horseplay and boxing practice in the back garden, barbecues and trekking through the bush, the language has far less charm.

Talk of Jews as “parasites” that need to be sterilized or exterminated. Rambling nonsense and ridiculous oaths about “blood and honor.” The need to “defend my people.

Urgent calls to arms in readiness for the looming race war because, as one extremist caught on camera warns, “It’s coming dude. It’s not a matter of if, it’s when.”

It’s all there, and so too is the awareness of the need to stay under the radar with encrypted apps, complex security protocols and fake, multiple online identities.

There is also an acknowledgement of the politics currently in play; how elected officials can be engaged and manipulated into offering tacit support for causes they may not fully understand.

But is this all really likely to lead anywhere? Or are they just like disenfranchised and disillusioned young white men in every Western society, who feel they are being left behind and treated as second-class citizens?

According to Australia’s top spook, Mike Burgess, the head of the Australian Security Intelligence Organization (ASIO), although some of these online neo-Nazis are just talking a good game, it could unfortunately spur someone on who’s on the fringe of that group.

Both Tarrant and Breivik inhabited the online netherworld of right-wing extremism before their murderous endeavors.

And there are surely others out there just like them, but who are able to keep whatever drives them in check and under wraps before they do something catastrophic.

Judging by the extent of organization the investigators uncovered, widespread gun ownership, the exhortations to raise funds, calls to buy up rural property as the first steps in forming a new, racist state and the encouragement to network domestically and internationally with fellow travelers, then don’t be surprised if that next extremist attack occurs in Oz.

While that might be the cause of much bloodshed, knowing what we know now, it should not be unexpected. One meeting caught on undercover camera finds a group of neo-Nazis swearing their oath.

It is my duty to be a warrior, to be strong and defend my people. It is my duty to speak the truth no matter the consequences. I may die, but my blood lives forever, until my end, this is my oath. Blood and honor.

If that doesn’t ring alarm bells across Australia and beyond, then heaven knows what will.

What a load of tripe report, and documentary. Push Globalism aka far left communism and feudalism on the people and get a push-back is nothing surprising. It is actually left and right in politics doing the authoritarian thing now, but globalists lead the pack. 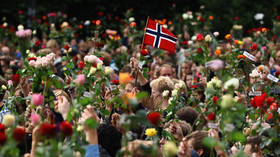 Australia as a member of the Five Eyes countries, will be put on the test?

We’re all “right wing extremists” now. If you don’t bow your head to international finance and the western technocracy you’re the extremist.

US Troops should leave Germany and take their Nuclear Weapons with...