The new expanded US-Greece military pact shows that Washington wants to pressure Turkey while securing a strategic position to counter threats from the Middle East and control the Eastern Mediterranean territory.

The USA and Greece signed an amendment to their existing military agreement that allows US forces to train and operate from additional locations inside the country.

Tensions between Turkey and Greece have been on the rise over maritime and airspace claims while Ankara has taken exception to a new defense agreement Athens signed with France.

It could be that the US regime wants to pressure Turkey to be a more cooperative host of US bases, although it could backfire and cause Turkey and Russia to increase cooperation.

Eurasia Center Vice President Earl Rasmussen observed that the move comes while Turkey has had multiple disagreements with Greece in the region over the exploration of energy resources, which will continue.

Greece is relatively near the Persian Gulf and parts of the Middle East, and US forces could launch from there for operations to guarantee oil supply shipments.

Rasmussen said the agreement provides the USA with a more permanent and diverse presence that would boost access to Africa as well as the Middle East.

Rasmussen said the agreement should also be understood as a bid by USA to boost its presence and credibility in the region after its humiliation in Afghanistan, reduced influence in Iraq and Syria, and the recent France-Greece defense pact.

However, historian and political commentator Dan Lazare warned that by expanding its military presence in Greece, the United States was entangling itself far more in the rivalries of an exceptionally complicated region.

Biden is strengthening America’s military partnership with Greece but has also approved Turkey’s purchase of $6 billion worth of F-16’s from Lockheed Martin.

In the long run, Lazare believes the establishment of the new bases will further weaken the NATO alliance even more.

France and Germany were at loggerheads with fellow NATO member states in Eastern Europe, while the United States is increasingly preoccupied with its Anglo-American alliance against China.

The Gods first make mad those whom they ultimately destroy.

The US is waging a war on poor, unfortunate Lebanon, which has been an unruly playground of Western misdeeds for decades”. …

The war against Lebanon is an Israeli war.

They will use their American colonials stationed in Greece territory for support and these Zio-American assets will probably be used to attack Lebanon and Syria. 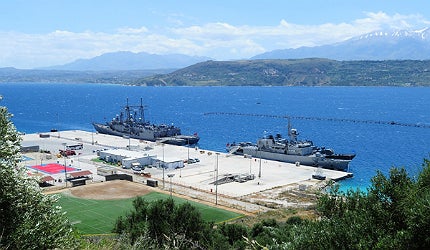 The Horror Show must go on?

And as the last step we could replace Greek population in Southern Cyprus with Syrian immigrants who flooded into Turkey which they can call their new home thereafter. After implementing this 3-step strategy we can drill freely in the Mediterranean, East or West doesn’t matter, and everybody else can shut the fuck up

We Turks also should triple our army size in Northern Cyprus, built a drone base, place ballistic missile battalions, built a naval base with countless frigates and destroyers there to obliterate Southern Cyprus including all American bases there.