A joint demonstration of Jews and Arabs protesting against annexation took place in Tel Aviv’s Rabin Square on Saturday night.

The annexation is a war crime. A crime against peace, a crime against democracy, a crime that will cost us blood,” said Meretz leader Nitzan Horowitz. 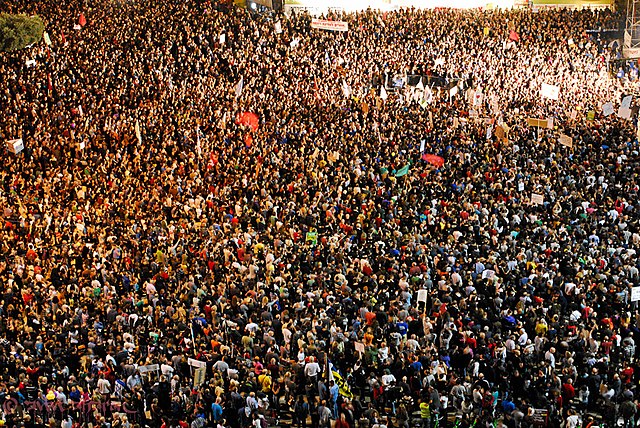 This has nothing to do with what is good for us, Israeli’s and Palestinians who live here in the Middle East,” said Meretz MK Tamar Zandberg.

It’s a cursed deal between one trying to win an election after trying to escape a trial. Trump is not a friend of Israel and Netanyahu is not good for Israel either.

In these difficult days for Israel, the USA and countries around the world, it has never been more important to stand up for justice and to fight for the future we all deserve.

Bernie Sanders was extremely heartened to see so many of you Arabs and Jews alike standing together for peace, justice and democracy.

It’s up to all of us to stand up to authoritarian leaders and work together to build a peaceful future for every Palestinian and every Israeli.

He then called for all plans to annex the West Bank to be stopped and said that “the occupation must be ended.

I know that on the day when we finally celebrate the establishment of an independent Palestinian state alongside Israel it will be because people like you stood up for justice, stood up for democracy and stood up for human rights.

At the protest, demonstrators held signs that said “Palestinian Lives Matter,” a nod to America’s Black Lives Matter movement. They also knelt during the rally, a gesture that has been used in the United States to protest as well.

A press release sent out prior to the event noted that police did not give organizers permission to hold the protest until less than 24 hours before.

The organizers claim that while police have expressed concerns over the Corona-virus outbreak, it is an attempt to prevent their protest, despite allowing other socially-distanced protests in Rabin Square.

Over 35 groups called on Jews and Arabs to attend the demonstration against Prime Minister Benjamin Netanyahu moving forward with the Trump administration’s “Deal of the Century.”

The intention of the authorities to suppress critical anti-occupation voices is another illustration of the shrinking democratic space in Israel under Netanyahu. The protest that worries them the most is one in which Jews and Arabs resist the occupation together.

“After the protesters blocked Ibn Gabirol Street in Tel Aviv and disrupted public order in the area, attacking drivers and throwing bottles and paint toward vehicles, police began clearing the road and carrying out arrests of the attackers,” Israel Police Spokesperson’s Unit said.

The Tel Aviv protesters shouted “I can’t breathe” and that they are “being suffocated by the encroaching dictatorship,” referencing the racial riots raging across the USA.

Time to stop the criminal offense against Palestinian statehood?

After 70+ years of genocide, deportation and exclusion from ‘normal’ life. its time to rest the clock?

How 20,000 Satellites for 5G will be Spreading Intense Microwave Radiation...