Joseph is leading the country at the moment in conjunction with the president’s cabinet, until a new election can be organized.

Moïse’s term expired in February but after circumventing both parliamentary and presidential elections was left in sole control of the country, prompting months of mass protests.

A two-week state of emergency has been declared in the Caribbean nation as the government mounts a manhunt for the killers who slew Moïse and injured his wife, Martine, at their home outside the capital of Port-au-Prince.

Claude Joseph, the interim prime minister of Haiti, has said that President Jovenel Moise was tortured before his assassination, as he vowed to bring the perpetrators to justice, according to ABC News.

Claude Joseph was appointed by Moise in April to be the country’s acting Prime Minister after Joseph Jouthe resigned. However, on 6 July, a day before Moise was killed, he appointed Ariel Henry to succeed Joseph.

Joseph also declared 15 days of mourning, from July 8 through July 22.

Video circulating on social media on Wednesday purports to show the team of assassins outside the presidential mansion, who identify themselves as agents of the US Drug Enforcement Administration (DEA), a federal police agency that often operates in other countries.

They can be heard speaking both Spanish and American English in the video.

Dominican media reported Wednesday that authorities were investigating the possibility that Moïse’s assassins had fled into the Dominican Republic, which shares the island of Hispaniola with Haiti.

In 1915, when Haiti’s then-president, Vilbrun Guillaume Sam, was killed in an uprising provoked by his execution of rebel leaders, then-US President Woodrow Wilson invaded the country with US Marines, who established a puppet military regime that ruled the country until 1934, resulting in the deaths of more than 15,000 Haitians.

Moïse’s rise to power began in the aftermath of the catastrophic 2010 earthquake that killed at least 230,000 people in Haiti, a desperately impoverished nation where few democratically elected leaders finish their terms, and both the USA and UN have repeatedly militarily intervened when persons or parties rise to power that threaten international business interests there.

Martelly prioritized profit-generating enterprises that served foreign interests, such as tourism, agribusiness, sweatshops, and mining, ensuring that donors to the Clinton Global Initiative directing aid to the country “made out like bandits,” as the North American Congress on Latin American (NACLA) nonprofit has put it.

Moïse’s election campaign was likely financed by Martelly’s alleged embezzlement of the PetroCaribe fund, but even then election irregularities delayed his inauguration by a year, leading him to claim that his term should last until February 2022, not 2021, as the country’s Superior Judicial Council ruled and many Haitians felt was the case.

The US State Department and United Nations both backed Moise’s claim of an extended term, however, and have continued to do business with his government even as increasingly deadly violence was deployed against protesters both by Haitian security forces and bands of armed gangsters.

In previous media reports we have learned the US Government was not happy with the Haitian president for putting off elections. Biden took the reigns, so…. 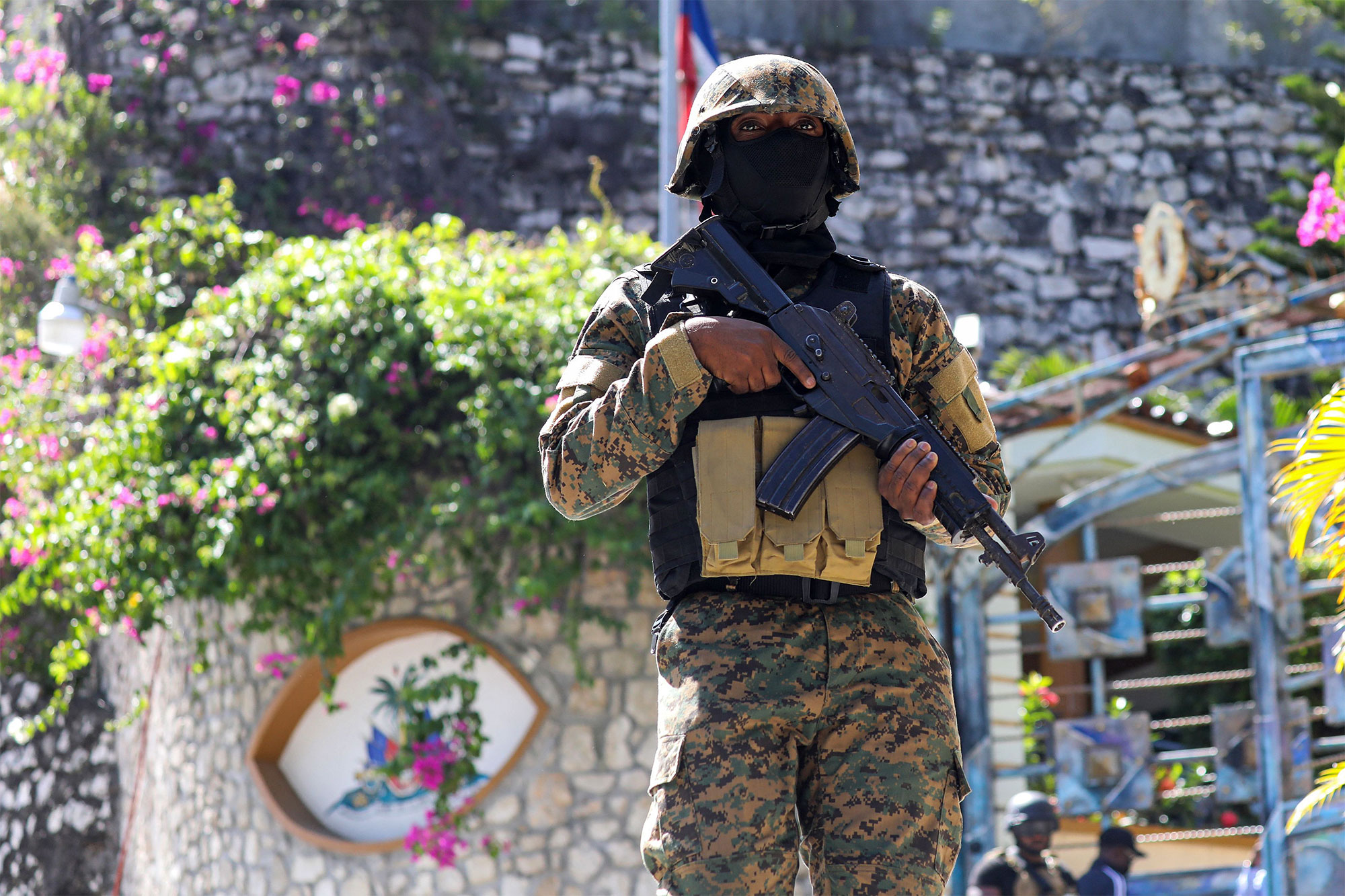 Biden does not want to waste too much time?

Remember them words: We lie, we cheat, we steal, we murder, we shoot children, women, elderly, we torture, we rape, we rig elections and overthrow legit governments, we invade, we loot, … We are Americans. And what are you going to do about it?

The bomb will explode from within?

A typical hallmark of the CIA and Pentagon. This war mongering nation must be stopped for the World to live in peace.

Haiti impoverished by their colonial oppressors?

I guess we can wait, when the Haitian Puppet Regime and their US Puppeteers + Handlers and their OAS lapdogs…accusing Venezuela Cuba Bolivia + Nicaragua. The CIA goons and their hired contractors and mercenaries probably attended all some language courses.

The assassins id themselves as DEA and use Spanish and American accent English, yet the USA put the guy in power and backed him. Meanwhile Haitians protested him and considered him an American stooge. Seems contradictory, but it wouldn’t be the first time Americans took out a leader they were backing.

Spanish speaking!!? WTF? It is the southern Western hemisphere! They all speak Spanish, or Portuguese!

They were local people who have enough of gringo propped up governments. Gringostan cannot abide Haiti being a nation that revolted from the French, and became the second nation that overthrew a foreign entity (1791-1804) running their lives and robbing them blind.

Just like Gringostan did in 1776. Except the Haitians were all slaves who got their independence, whereas the gringos weren’t.

Crookim
Guest
Reply to  The Whistler

As always Colombian ex military personnel, turning into mercenaries that end up been used as cannon fodder in every conflict around the world, like in Yemen working for UAE military that occupies 4 of the 5 port cities in the tortured Arab country.

baronmaya
Author
Reply to  The Whistler

Get those Yankees out, and fast!

Over the assassination of Haitian President Jovenel Moise, Interpol has asked today the Colombian government and national police to share the information about perpetrators of this crime.

The preliminary information shows that these are Colombian citizens, retired military of the national army.

Haiti’s president was killed by ‘Foreign Hit Squad’ of ex-Colombian military & Haitian-Americans, 11 of them were arrested hiding inside the Taiwan embassy.

Claude Joseph, the interim prime minister of Haiti, has said that President Jovenel Moise was tortured before his assassination, as he vowed to bring the perpetrators to justice, according to ABC News.

Just one day after Moise appointed a new PM? Look like premeditated murder, do not let the FBI in on the investigation, because they will destroy all evidence that does not favor the US invasion?

Unfortunately he was against the global vaccination campaign, the next day a shipment of half a million American vaccines arrived in Port-au-Prince.

About 50% chance of surpassing Catastrophic Climate Change threshold within 5...