The express intention of the US militarization initiative of the Iraqi oilfields was to draw a line in relentless advance of China and Russia into what had been its heartlands of influence in the central Middle East.

For Iraq, the promise was made simply to expedite its waiver from the U.S. to continue to import gas and power from Iran and to avoid Washington cutting off financial assistance to it and introducing threatened sanctions against Baghdad.

The ratification last week of a US$480 million deal for oilfield services giant, Schlumberger, to drill oil wells at the super-giant West Qurna 1 field fits precisely into this mold of perennial game-playing by Iraq with the USA and China, as does the news that the U.S.’s Halliburton is in talks over bidding for ExxonMobil’s long-troublesome stake in the field.

Located around 65 km from southern Iraq’s principal oil and British export hub of Basra, West Qurna 1 has a considerable portion of the estimated 43 billion barrels of recoverable reserves held in the entire super-giant West Qurna field.

Originally West Qurna 1 was thought to have around 9 billion barrels of these reserves, but earlier this year Iraq’s Oil Ministry said it has plans to boost the field’s crude oil production capacity to more than 700,000 barrels per day (bpd) over the next five years on the basis that it has recoverable reserves of more than 20 billion barrels.

ExxonMobil’s unwillingness to continue on the field goes to the very heart of not just why so many major Western oil companies have done the same in recent months but also why, specifically, any idea the USA has about using the Schlumberger contract in West Qurna 1 to re-assert its influence across the oil fields of Iraq is ill-founded.

The fact remains that China has been expanding its influence across the very same fields ever since the USA signaled that it wanted to reduce its role in the Middle East (and elsewhere, such as Afghanistan) in order to avoid fighting ‘endless bloody wars’ in the region.

A case in point is on West Qurna 1 itself, with China already dominant at the site, not only through the 32.7% stake held by PetroChina – the listed arm of China National Petroleum Corporation (CNPC) – but also through the gradual acquisition of a range of huge supposed ‘contract-only’ awards made to Chinese companies for work on the field.

These most recently included the US$121 million engineering contract to upgrade the facilities that are used to extract gas during crude oil production to the China Petroleum Engineering & Construction Corp (CPECC).

Not only has this put China as the key player on West Qurna 1 – so alienating ExxonMobil from both the field development and, even more importantly from going ahead with the crucial CSSP – but it has also allowed it to make other demands from Iraq.

Following ExxonMobil’s withdrawal from the CSSP, CNPC was the only player left. The Iraqi Oil Ministry knew perfectly well that it did not have the required technology, expertise, or engineering capabilities required at that time to complete the project to the top specifications.

However, it was assured by Beijing that CNPC was in the process of ‘acquiring and updating’ all of the additional elements that it was lacking to complete the CSSP to the required standard ‘over time’.

What the Chinese wanted to do was to gain first refusal on all other major oil and gas fields in Iraq, which was the agreement at the time that the CSSP contract was announced.

This is precisely what has happened, with the same sort of ‘contract-only’ award (‘drilling-only contract’ in this case) for Iraq’s super giant Majnoon oil field to another unheard-of Chinese firm.

Also located very close to Basra – around 60 km to the north-east – the super giant Majnoon oilfield is one of the world’s largest, holding an estimated 38 billion barrels of oil in place.

It is currently producing around 240,000 bpd. Longer term, though, the original production tar­get figures for then-Shell-led consortium still stand.

The first production target of 175,000 bpd (already reached), and the plateau production for the site of 1.8 million bpd at some point in the 2030’s. 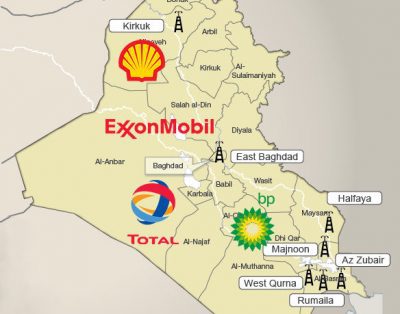 Saddam Husein had spend $500 million to rebuild Babylon, including the hanging gardens previously ruled by Nebuchadnezzar.

Amazing, and this is what American democracy wants and needs to destroy?

US Government pumping Trillions of Dollars into Zombie Companies