The Indonesian government has yet to protest over an incursion by a Chinese survey vessel and two Coast Guard escorts into its economic exclusion zone (EEZ) north of the Natuna islands, which has now continued around a promising natural gas exploration site for more than three weeks.

It’s the longest and most overt incursion we have seen, yet there has been no response at all,” says one analyst, noting that the three Chinese intruding vessels are being shadowed by a rotating flotilla of six Indonesian Navy ships and three Maritime Security Agency (BAKIMLA) patrol craft.

Foreign Ministry spokesman Teuku Faizasyah said he could “neither confirm nor deny if there are diplomatic interchanges between Indonesia and the PRC on this issue. What is important to us is the exploration (in the gas block) is unhindered.

It is understood the Indonesian Foreign Ministry did call in Chinese ambassador Xiao Qian to query him about the extended seabed mapping exercise, but no further action has been taken in the most serious incident since a Chinese Coast Guard vessel seized back a captured trawler in territorial waters in 2016.

The Guangzhao-based Haiyang Dizhi 10 had its automatic identification system (AIS) activated when it entered Indonesia’s EEZ in late August in the company of the two Coast Guard cutters, both of which had been running dark since they left their homeport of Yulin on Hainan island.

Analysts say the survey ship began steaming in a grid pattern, indicating it was mapping the seabed close to where Harbour Energy, a joint venture between Premier Oil and state-owned Russian company Zarubezhneft, launched an appraisal drilling program three months ago.

The Chinese have often harassed oil exploration activities in waters claimed by Vietnam and Malaysia, but this is the first time they have homed in on an area where its unilateral nine-dash line claim of historic sovereignty intrudes into Indonesian maritime territory.

Up to now, Beijing has only sought to exert its traditional fishing rights inside that contested line, despite the concept not being recognized under the United Nations Convention on the Law of the Sea (UNCLOS), of which China and Indonesia are both signatories.

Since 2016, there have been fewer incursions as the bulk of the Chinese fishing fleet, along with its Coast Guard and militia escorts, have begun ranging further out into the Western Pacific in search of concentrations of fish before they reach Southeast Asian waters.

The Noble Clyde Boudreaux, a rented Malaysian oil rig, began operations in Harbour Energy’s Tuna Block, 300 kilometers north of Natuna island, in late June, looking to determine the size of a resource that was first discovered about three years ago. 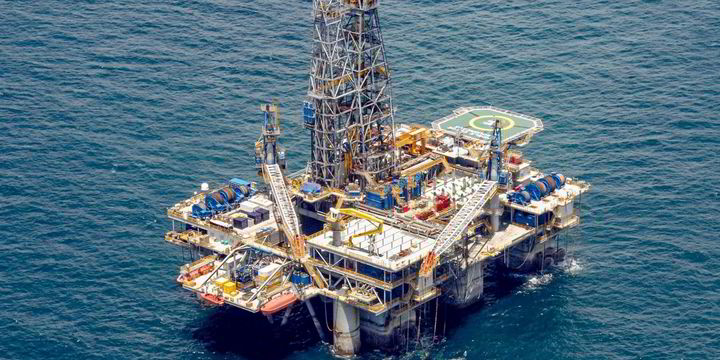 The two appraisal wells are designed to measure the extent of the field, which is currently believed to contain one trillion cubic feet of gas, but will need to be significantly larger than that to be judged a commercially viable deposit.

Even then, with an LNG operation out of the question, the only way to exploit such an isolated block will be to run a 220-kilometer pipeline southwest to the three West Natuna fields owned by Premier and two Indonesian companies, Medco and Star Energy, that have been supplying piped gas to Singapore for the past 25 years.

Although two of those fields are now severely depleted, they are the only producing blocks among the 11 existing concessions in the Natuna archipelago.

Historically, the best known was Natuna D-Alpha, a massive 222 trillion cubic feet resource north of Natuna Island, which was eventually abandoned because of dangerously high quantities of Co2.

It wasn’t until mid-July that the Chinese cutter CCG 5202 activated its AIS, confirming its presence southeast of the Tuna rig.

Three Bakamla patrol craft dispatched to the area were subsequently joined by the navy tanker KRI Bontang and later by the British-built corvettes KRI John Lie and KRI Bung Tomo.

In mid-August, the CCG 5202 was replaced by the CCG 5303, which on August 31 met up with the CCG 4303 in escorting the Haiya Dizhi 10 into the EEZ where it has since been running legs 110 kilometers long and 10 kilometers wide using a multi-beam echo-sounding system.

Interestingly, its search pattern remains confined to a 15-20 kilometer-wide area just inside the EEZ where the rig is located, roughly conforming with what is currently believed to be the extent of China’s hazy nine-dash line.

Three years ago, the same specialized vessel and a team from the China Geological Survey took part in a joint marine survey with Pakistani scientists in the Indian Ocean for what was described as “hydrocarbon research and geological mapping.”

Only last January, the Chinese survey ship Xiang Yang Hong 03 was detected carrying out unauthorized seabed mapping in territorial waters off the Indonesian island of Sumatra.

Research into currents, bathymetry and the salinity of the water helps submarines to operate largely undetected.

Observers tracking the flurry of ship movements noted a co-relation between the carrier’s presence and a surge of 12 Chinese vessels into the disputed Spratly Islands-Mischief Reef area between September 5 and 12.

The Carl Vinson and its two escorts, the USS Chaffee, an Arleigh Burke-class guided-missile destroyer, and the USS Lake Champlain, a Ticonderoga-class missile cruiser, have now returned to Okinawa, but are eventually scheduled to sail for the Middle East.

The San Diego-based flattop is carrying stealthy F-35C joint strike fighters for the first time, along with a beefed-up complement of EA-18G Growler and E-2D Hawkeye electronic warfare aircraft for what is being touted as the seaborne air-wing of the future.

The Carl Vinson had no sooner left the South China Sea than it was replaced by its sister ship, the USS Ronald Reagan, which is on its way back to its Yokosuka base in central Japan from a three-month deployment to support the US withdrawal from Afghanistan.

A recent US Navy statement said the USS Reagan would be conducting anti-submarine and tactical flight operations on an expected passage that will skirt the disputed Spratly Islands, where China has built military installations on 13 reefs and small islands.

Most of the Chinese Coast Guard vessels are now well known in the region. The CCG 5303, for example, one of China’s advanced Type 818 Zhaoduan-class cutters, was among six vessels involved in a stand-off at the site of a drilling rig inside Vietnam’s EEZ in 2019.

The 4,000-tonne CCG 5303 was again involved in the harassment of oil exploration work around Malaysia’s Kasawari field off Sarawak last July, which also led to the air force scrambling jets to intercept a passing formation of 16 Chinese Illuysin IL-76 and Xian Y-20 transport aircraft.

Several additional Coast Guard vessels have recently been transferred from the North Asia and East Asia commands to the South China Sea command in Hainan, where the Chinese have recently expanded their naval base to include nuclear submarines.

The bigger vessels, which range in size from 5,5000 to 12,000 tons, are armed with a 76 m.m. rapid-fire naval gun, two secondary weapons, twin anti-aircraft guns and an assortment of heavy machine-guns.

According to one regional analyst, the Chinese navy’s only role is to provide over-watch, deter escalation and, if necessary, to intervene.

That allows China to use its forces in a graduated strategy to establish a presence, normalize that presence and ultimately to enforce it in disputed areas.

Such coercive tactics become even more worrying against the background of China’s new Coast Guard Law, passed last January, which permits “all necessary means” to stop foreign vessels, including the use of firepower aboard Chinese ships in territory perceived to be its own.

Global Economy Growth Plummeted by Half compared to 2008 crisis levels

Lebanon once again Becomes an Easy Prey for Israël