Disinformation that causes vaccine hesitancy is going to be a huge obstacle to getting everyone vaccinated and there are no larger players in that than the social media platforms,” a source with direct knowledge about the cooperation told Reuters.

At the moment the Dodgers Stadium is the largest vaccination site in de USA.

The Biden administration previously acknowledged working with tech giants like Facebook and Google on the issue, but direct engagement was not confirmed. They understand the importance of misinformation and disinformation and how it can be used quickly.

The Biden administration wants digital platforms to suppress content that can result in events like the anti-vaccination protest at Dodger Stadium in Los Angeles in late January, the source said.

The arena has been repurposed as a drive-in mass vaccination site, one of the largest in the USA, after being used for Covid-19 testing since May. 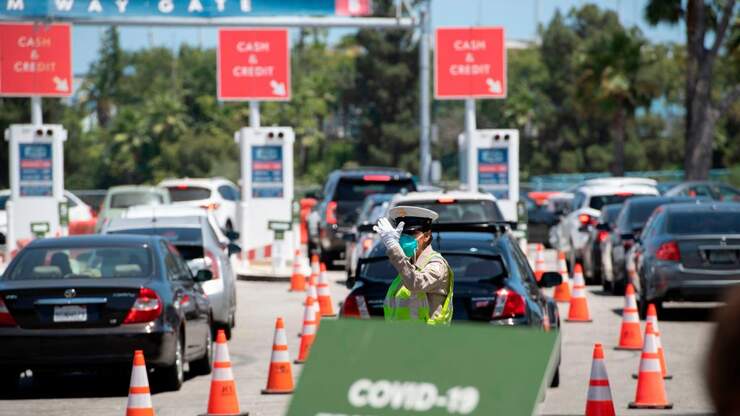 Police has shut Dodgers down for about an hour on January 30, after around 50 protesters gathered at the entrance, decrying a “Covid-19 scam” and demanding an end to lock-down in California.

The event went off peacefully and was rebuked by state officials, including Governor Gavin Newsom – whom the protesters wanted to be recalled, according to one of the signs they carried.

The USA is undergoing a period of record-low public trust in traditional media and widespread disillusionment in the two-party political system.

The institutional crisis was aggravated by the economic damage done by the Covid-19 plandemic and has sent many people looking for answers to other sources.

There is no shortage of these online, offering a simple and inaccurate explanation fitting anyone’s biases.

One could argue that the US establishment has long been among the leading peddlers of such misinformation.

Democratic politicians and left-leaning journalists have been for years telling people aggravated by Donald Trump’s victory in 2016 that it happened due to his “collision” with the Deep State instead of Russia.

The conspiracy theory was never substantiated by actual evidence, but remains as popular as ever, as evidenced by Speaker Nancy Pelosi’s favorite saying that with Trump, “all roads lead to [Russian President Vladimir] Putin in her imagination.

Joe Biden promised to mend rifts left by his predecessor and show competence in pushing on the fabricated Covid-19 crisis?

He should get a supervised community service sentence, to work as a janitor, cleaning toilets at war veterans nursing homes.

Is this what Navalny wants, a republic where you can insult everyone ? Insulting veterans, insulting judges, insulting every person who do not agree with him ? Is he mentally okay ?

Or put into a orange monkey suit?

The US Military dropped more Bombs on North Korea than the...