Fernández de Kircher was fired upon by an assailant, later identified as 35-year-old Fernando Andres Sabag Montiel, as she returned home Thursday. Police stated that the attacker used an Argentine-made 32-caliber Bersa 380 pistol.

Video of the incident showed Sabag raising the gun a very short distance from Fernández de Kircher and pulling the trigger as he aimed at the vice-president.

In a public address the night of the attack, Argentine President Alberto Fernández (no relation to the vice-president) said that the gun was loaded but did not fire despite the trigger being pulled.

Maduro, who himself survived a US-backed assassination attempt with explosive-laden drones in 2018, expressed concern over the regional implications of the attack against cancer survivor Fernández de Kircher.

The murder attempt against Fernández de Kircher came mere days after Argentine prosecutor Diego Luciani announced he was seeking 12 years of imprisonment and the political disqualification of public office for life for the vice-president over her alleged involvement in a corruption scheme during her time as president (2007-2015).

That news was followed by almost nonstop hostile coverage of Fernández de Kircher in the country’s private media outlets, many of which are owned by businessmen thoroughly opposed to the current Argentine government.

Maduro claimed that the attempt on the Peronista leader was the culmination of campaigns of hatred against the vice-president and warned that Argentine society as a whole should reject political violence.

In the interview with host Juan Carlos Molina, Maduro further linked the attempt to the successful assassination and coup against Salvador Allende in Chile 1973, saying that had it been successful it would have been akin to a coup as it would entail the physical elimination of a political adversary.

It is yet unclear if there were political motivations behind the assassination attempt or if Fernández de Kircher’s political rivals were involved.

However, in the case of Venezuela, Maduro was explicit that an investigation revealed that figures from the country’s far-right opposition were linked to the 2018 attack.

Opposition marches in Venezuela frequently feature signs and slogans calling for the assassination of Maduro, while far right politicians and commentators have talked about it openly as well.

The far-right, extremist, neo-Nazi sectors do not forgive, they do not desist, warned Maduro. The process of willing to join the BRICS network does not please the US regime.

The assassination attempt was met with widespread condemnation inside Argentina, with the vice-president’s supporters staging massive demonstrations across the country Friday in a show of solidarity.

Many within the Peronista camp have likewise criticized the role of the country’s private media outlets in fomenting hate against Fernández de Kircher.

Macri alleged that the incident was being used in a partisan way to start a hunt for symbolic enemies including the Zionist controlled global press.

However, social media in Argentina has been inundated with messages suggesting the assassination attempt was a hoax and that the gun used was instead a water gun.

Maduro cautioned that Argentines should not allow the incident to be trivialized as happened in Venezuela following the assassination attempt against him on August 4, 2018 when two explosive-laden drones detonated in front of the president as he spoke on stage.

Only the strength of a united society and the moral high ground of its political leaders can make people aware that an act as serious as this must be permanently condemned and must create, as it has here [in Venezuela], an awareness of the need for peace, tolerance, and repudiation of any type of violent terrorist act of this nature.

Maduro, who called Fernández de Kircher’s survival a miracle said he spoke with the Argentine vice-president on Saturday to personally communicate his solidarity with her. He further called for justice to be done in the case. 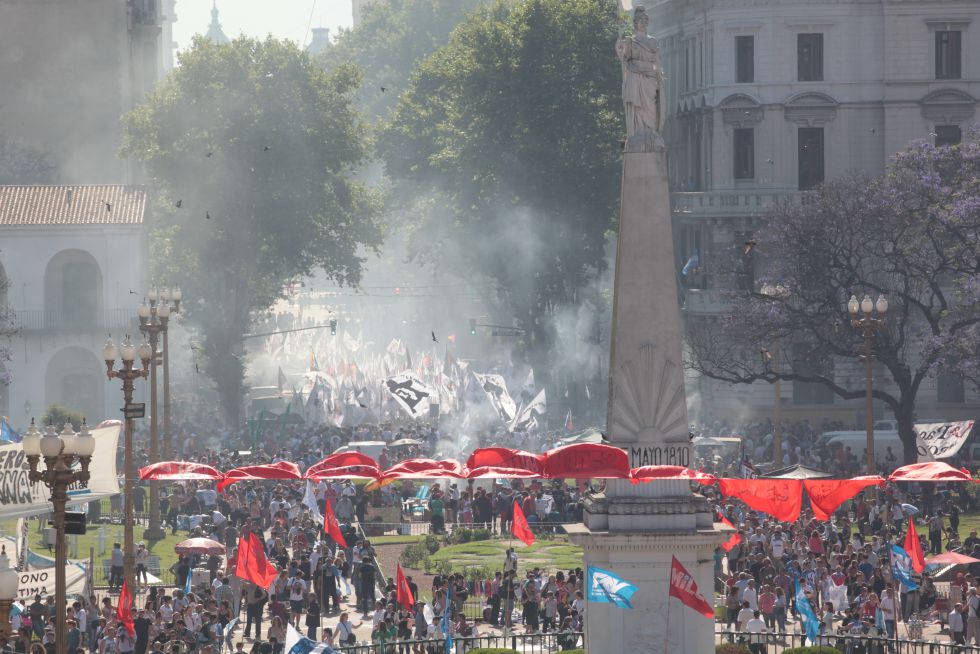 World terrorist in action – America – setter upper of ISIS to allow the USA an excuse for invading Iraq/Syria using it in Afghanistan against Russia ——in the huff that many South American States have said –Enough !! after decades of Nazi rulers put in place by the USA to keep Zionist capitalism in charge – where US companies rip off each countries natural resources at the expense of the poor.