The Venezuelan diplomat was kidnapped twice by Washington. First, Alex Saab was kidnapped under orders of the Trump administration on June 12, 2020, while his plane refueled in Cape Verde.

Then again, under the Biden administration, on Saturday, October 16th from Cape Verde to Miami. Ambassador Saab was abducted from Cape Verde without the knowledge of his legal team or family the day before the island’s presidential election.

It was rightfully feared by Washington that the sure-to-be-elected opposition government would resist their criminal dictates and immediately free Ambassador Saab, proving diplomatic immunity by international law.

Like this Saab would no longer be a stooge for the U.S. diplomatic hostage-taking and its infliction of physical and psychological torture.

While in custody, three of diplomat Saab’s molar teeth were broken and he was repeatedly beaten and subject to electroshock amongst degrading “searches”, long periods in stress positions.

Saab also fell victim of the withholding of food and water for three days, and coercion through deplorable holding cell conditions. Additionally, Diplomat Saab was denied medication for treating cancer and his other critical needs.

They wanted to force him into becoming a monster, a false accuser against Venezuela, against me, and against the Bolivarian revolution — something he never allowed.

Nonetheless, Ambassador Saab released a statement that he “is of sound mind and not suicidal”. He is rightfully concerned that the authorities will fake his murder. Diplomat Saab also pledged his fidelity to President Maduro and the Venezuelan people.

Ambassador Saab also urged everyone to “be strong and always stay united” for justice for the people of Venezuela and all those oppressed worldwide by illegal U.S. unilateral economic sanctions – which amounts to nothing less than gangster imperialism.

According to U.S. authorities, Ambassador Saab is being held in a federal prison in Miami near its courthouse.

This could not be confirmed by his legal team or his supporters and remains a point of concern at this time – as Ambassador Saab was only permitted to view his Miami court arraignment on Monday, October 18th by video.

First, in Cape Verde Diplomat Saab was illegally arrested since it was carried out in advance of Interpol’s “red-notice”.

On March 15th, the Economic Community of West African States (ECOWAS) court ruled that the continued detention and push for extradition of Venezuelan diplomat, Alex Saab by the Cape Verde government was illegal.

Third, the USA has no legal standing. It erroneously claims that Ambassador Saab was bribing Venezuelan Govt officials. If this is the case, then clearly this matter belongs in Venezuelan court, not in Miami using up federal and state tax dollars.

Seriously, the U.S. is beset with the highest drug abuse numbers in the world. Why are we wasting millions on alleged “money laundering” charges that were at worst used to supply food and medicine to Venezuelans?

Without question and by admission, unilateral coercive economic sanctions are done routinely to “make the economy scream” and “enable regime change” in the targeted country.

However, in the longstanding cases of both Cuba and Iran this strategy hasn’t worked. In the case of Venezuela, it is hoped by Washington that the starvation and illness of its people will somehow facilitate the giveaway of its oil reserve, the largest in the world, to Exxon Mobil.

Let’s stop subsidizing corporate plunder. The U.S. has already committed theft and piracy against Venezuela and Iran with the unlawful seizing of Citgo and its transiting oil tankers.

Also, why aren’t the alleged and unnamed U.S. Miami banks that are involved in Ambassador Saab’s case put on trial? The Manhattan district attorney has no problem fining foreign banks for “sanction” violations.

U.S Magistrate Judge John J. O’Sullivan of the U.S. District Court for the Southern District of Florida is presiding over the case of Ambassador Saab.

Alexander Kramer, of the Criminal Division’s Fraud Section, and Assistant U.S. Attorney Kurt K. Lunkenheimer, of the Southern District of Florida, are prosecuting the case.

The aforementioned judge and prosecutors are responsible for the illegality of these charges and for Ambassador Saab’s continued health & safety.

They also claim Nicolas Maduro, who won over 67% of the popular vote for his second term, “isn’t the president of Venezuela.” Instead, they anointed Juan Guaido as interim president.

Guaido, a traitor to the Venezuelan people and a U.S. sock puppet, wasn’t even a candidate in the 2018 election.

Fifth, charges levied against Ambassador Saab involve his circumventing U.S. unilateral coercive economic sanctions waged against the Venezuelan people – which are illegal under both international and humanitarian law.

This charge makes Ambassador Saab a hero for his repeated delivery of food and medicine to the impoverished.

And as such, all people of conscience in and on behalf of 39 countries illegally oppressed by U.S. unilateral economic sanctions stand with Simon Bolivar and Alex Saab against Yankee imperialism today and always.

Alexa Weber, leader for the Bolivarian circle of Miami, provided interviews to independent press, and the following speakers were informative and energizing, leading the diverse group in chants to support President Maduro’s leadership, freedom for Diplomat Alex Saab, and Hands-off Venezuela, Cuba, and Nicaragua. 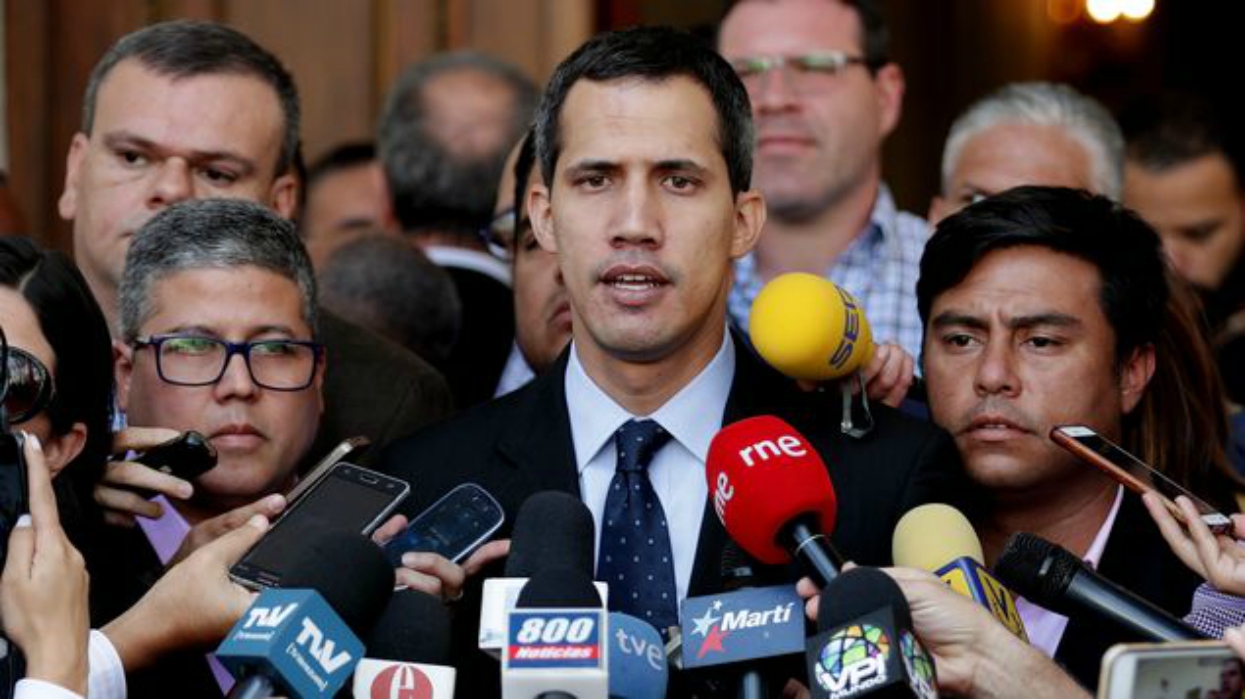 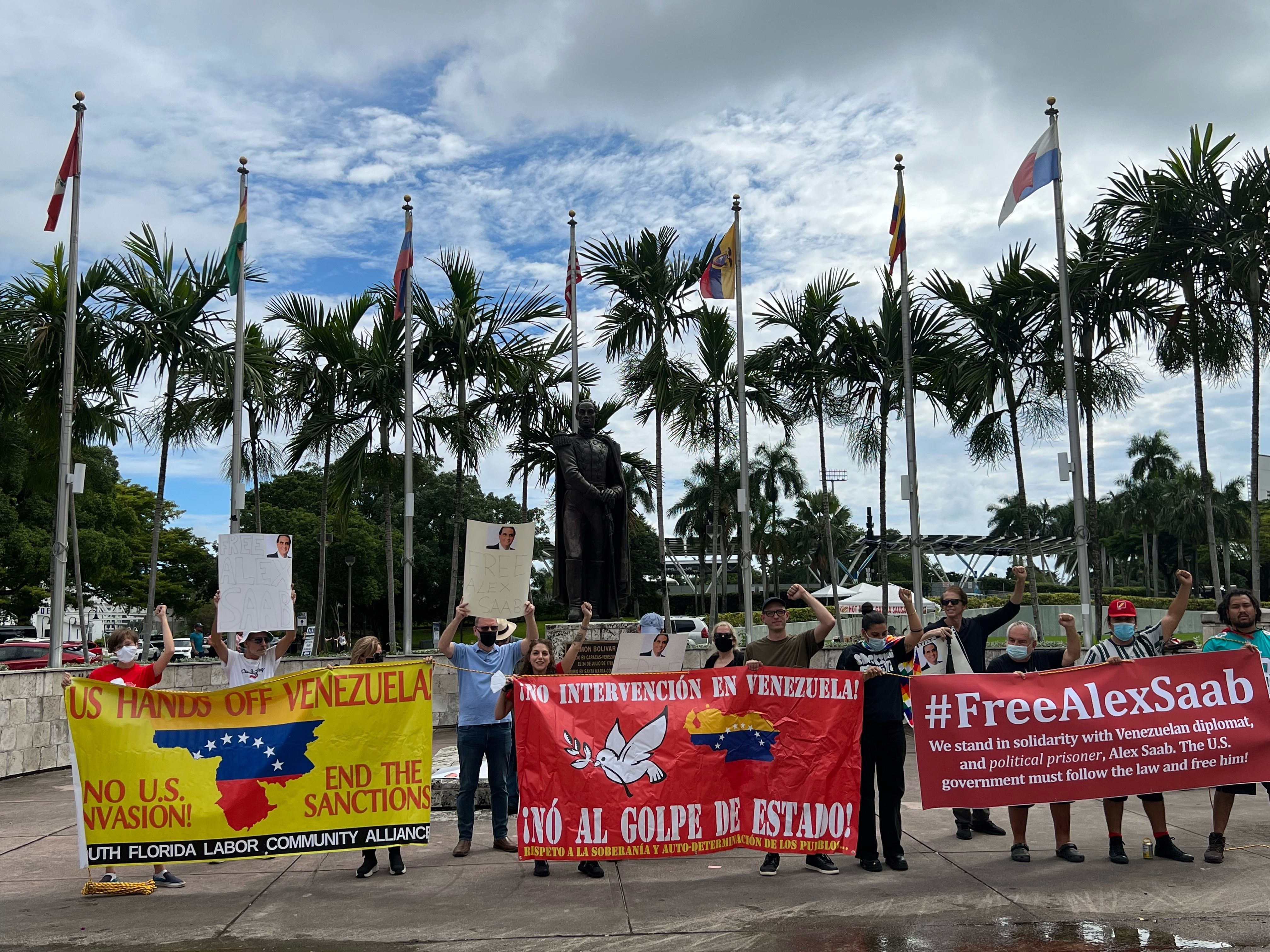 Syrian Arab Army does not need “US permission” to Deport Terrorists...

Africa’s largest Oil Reserves @ Stake in the Battle for Libya