United Nations (UN) peacekeepers charged with protecting disaster-struck Haiti have fathered hundreds of babies with local women and girls before leaving them behind in poverty.

Girls as young as 11 were allegedly sexually abused and impregnated by peacekeepers and left “in misery” to raise their children alone. Most of the accused rapist soldiers came from Sri Lanka and Nepal.

The children, dubbed colloquially as “Petit MINUSTAH”, “Bébés Casques Bleus” (blue helmet babies), or “Les Enfants Abandonnés par la MINUSTAH” (the children abandoned by the MINUSTAH) suggests the children will struggle for the unforeseeable future with a label they had no control over.

The UN mission in Haiti, one of the UN’s longest peacekeeping deployments, has been riddled with controversy.

MINUSTAH was already linked to a sex ring in Haiti in which 134 Sri Lankan peacekeepers exploited nine children in a sex ring from 2004 to 2007.

Prior to that, Nepalese soldiers inadvertently introduced a cholera outbreak that reportedly claimed 10,000 lives following the major 2010 earthquake event.

The MINUSTAH has also been accused of gang rape, the rape of a mentally challenged 14-year-old boy, exploitation and unexplained deaths, torture, and unfortunately more.

Historians may also recall that United States Marines occupied Haiti from 1915 to 1934, with U.S. interference in the country continuing up until the present day.

Under the leadership of Bill Clinton, the U.S. led a military operation dubbed “Operation Uphold Democracy” into Haiti to remove the military regime that took over following the 1991 Haitian coup d’etat.

It is also worth noting that both Bill and Hillary Clinton have a long and controversial relationship with the Caribbean nation, for being involved in child sex trafficking rings. 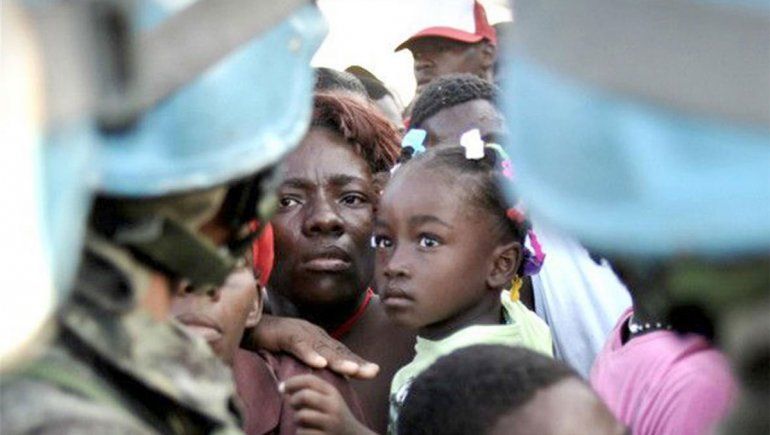 The UN soldiers were also represented by Argentina, Brazil and Uruguay?

Indeed, the UN is a multiple racist entity?

Poverty and child sex abuse are tied together?

Many Haitians are now been forced to work as cheap labor slaves in other Caribbean Zionist-led dictatorships?

That is the formula, create mayhem in order to establish cheap labor forces handed over by human trafficking rings?

Borneo Oil Spill now Larger than the City of Paris

India to set up Special Economic Zone for Russian companies