Twitter is flagging an American Heart Association (AHA) website link as ‘unsafe’ after the organization published an abstract of research linking Covid-19 vaccines to heart disease.

The abstract of the study looking into a possible correlation between mRNA Covid shots and heart inflammation was published in one of the Association’s journals, Circulation, on November 16, 2021.

The research points to a 14-point rise in the risk of acute coronary syndrome within five years in those who have been injected with this type of vaccine, concluding that the “mRNA vacs dramatically increase inflammation.

Especially on the endothelium and T cell infiltration of cardiac muscle and may account for the observations of increased thrombosis, cardiomyopathy, and other vascular events following vaccination.

It is worth noting, however, that while the American Heart Association did publish the abstract, it later attached an expression of concern to the study over “potential errors” in it.

Among other things, it cites the author’s reliance on anecdotal data and a lack of statistical analyses. The Association warned the “abstract in its current version may not be reliable.” On top of that, the study has yet to be peer-reviewed.

Twitter’s ‘unsafe’ label was up until recently reserved for webpages thought to contain viruses and malware; its use has, however, now been extended to also cover cases where ‘misleading content’ is suspected.

Among the vaccines that employ the mRNA technology mentioned in the study are Pfizer-BioNTech and Moderna.

Vaccines of this type use a genetically engineered copy of a molecule known as a messenger RNA (mRNA) to elicit an immune response, whereby antibodies are created that will fight Covid should the vaccine recipient contract it.

The European Medicines Agency (EMA) announced on Friday that a review of mRNA-type vaccines had revealed an increase in the risk of myocarditis in younger males, mentioning in particular Pfizer–BioNTech’s shot and the one developed by Moderna.

It comes after last month the agency commissioned a thorough review of all data related to heart inflammation disorders in individuals inoculated with Moderna’s Covid-19 jab.

In November, Germany’s vaccine advisory committee recommended the use of Pfizer-BioNTech’s Comirnaty shot over Moderna’s Spikevax, citing similar concerns. A number of Nordic nations have also restricted the use of Moderna’s vaccine.

Meanwhile authorities stateside have also flagged Moderna’s shot as potentially unsafe for young men. A total of 309 cases had to be treated in hospital.

Back in June, the US Advisory Committee on Immunization Practices revealed a total of 323 cases had been recorded in Americans under 29 that fell under the definition of myocarditis or pericarditis, following the administration of the vaccine.

European and American authorities, however, hastened to qualify these findings by emphasizing that the pros of taking the shot still far outweigh the possible risks.

Twatter = an e-toilet cubical wall for <80 I. Q. bottom-feeders. People who actively use the platform, need to re-assess their lives. 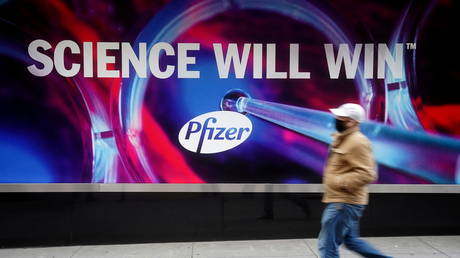 LOL! “TWITTER” has been bought by BIG PHARMA. Wake up sheeple, social media is a tool of the deep state

Bruins rally past Blues and win Game 1 of Stanley Cup...

US regime sells Syrian Oil to support Terrorists in the Middle...