Astronomers have found evidence of another planet orbiting Proxima Centauri, the nearest neighboring star of the Sun.

Proxima Centauri is the closest star to our Sun, lying just over four light-years away (1 light year being nearly 9.5 trillion kilometers). It is a small, red dwarf star which radiates just a fraction of the Sun’s brightness.

According to a press release by the European Southern Observatory (ESO), the planet’s mass is a quarter of Earth’s, making it one of the lightest exoplanets to have been discovered so far. It orbits Proxima Centauri in nearly five Earth days.

The effect of Proxima d’s gravity is so small that it only causes Proxima Centauri to move back and forth at around 40 centimeters per second (1.44 kilometers per hour),” the release explains.

The discovery has been made using ESPRESSO (Echelle Spectrograph for Rocky Exoplanets and Stable Spectroscopic Observations), installed on the European Southern Observatory’s Very Large Telescope (ESO’s VLT) in Cerro Paranal in northern Chile.

The findings of the study were published in peer-reviewed journal Astronomy and Astrophysics. The mass of Proxima b is comparable with that of Earth.

The newly spotted celestial object is also believed to be orbiting between Proxima Centauri and the ‘habitable zone’, or the area around a star where water could exist in liquid form.

The other two planets orbiting Proxima Centauri – Proxima b and Proxima c – have orbits of 11 Earth days and five Earth years respectively.

Proxima b is the first to have been discovered and lies in the habitable zone of the star whereas Proxima c is believed to be too cold to sustain life as humans know it.

Among the three exoplanets, the presence of Proxima b has so far been conclusively established by follow-up observations in 2020.

The discovery shows that our closest stellar neighbor seems to be packed with interesting new worlds, within reach of further study and future exploration, said João Faria, a researcher at Portugal’s Instituto de Astrofísica e Ciências do Espaço, and the lead author of the study.

This result clearly shows what ESPRESSO is capable of and makes me wonder about what it will be able to find in the future. 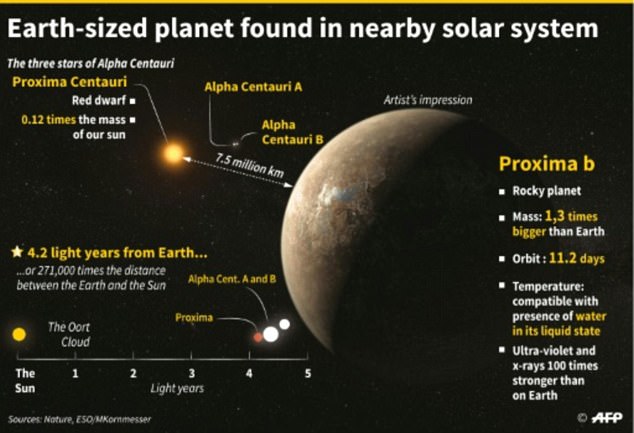