Pirates hoping to hijack a container ship in the Gulf of Guinea saw their plans ruined when a helicopter full of Russian marines rode to the rescue, as a Northern Fleet destroyer happened to be on patrol in the area.

MSC Lucia, flying the flag of Panama and bound for Togo, sent out a distress call around 1 pm local time on Monday, when it was boarded by armed men approximately 86 nautical miles south-west of the Agbami Terminal on the Nigerian coast.

The signal was picked up by the missile destroyer Vice-Admiral Kulakov, which was in the area to conduct maritime security operations.

The Lucia’s crew sheltered in the engine room, while the destroyer quickly dispatched a Ka-27PS helicopter with a marine complement on board.

Upon seeing the helicopter, the pirates left the ship, got into a fast boat and headed towards the coast at full speed. The Kulakov’s marines then landed on the Lucia and conducted a sweep of the ship to confirm it was secure.

The Udaloy-class destroyer arrived into the Gulf of Guinea on October 11, for a three-week anti-piracy patrol. It had already prevented the seizure of another Panama-flagged vessel.

Almost a quarter of all cargo ships in the world are registered in Panama, taking advantage of the Central American nation’s maritime regulations. The Lucia is owned by the Swiss-Italian outfit Mediterranean Shipping Company (MSC).

Accompanied by the tanker Academic Pashin and rescue tug Altai, the Kulakov has been on long-range deployment since June, when it departed the Northern Fleet home base at Severomorsk.

The ship has taken part in the Kronstadt naval parade, conducted anti-submarine warfare training in the Atlantic, and crossed the Mediterranean to Syria and back, before arriving in the Gulf of Guinea.

The task force has called on ports in five countries, and traveled more than 20,000 nautical miles.

I have no doubt about these pirates are working for the CIA, Russia should arrest them if possible and kill any identified cia operatives preferably anyone that look like Anglo Saxons.

Should have blown that raft out of the water as an object lesson. 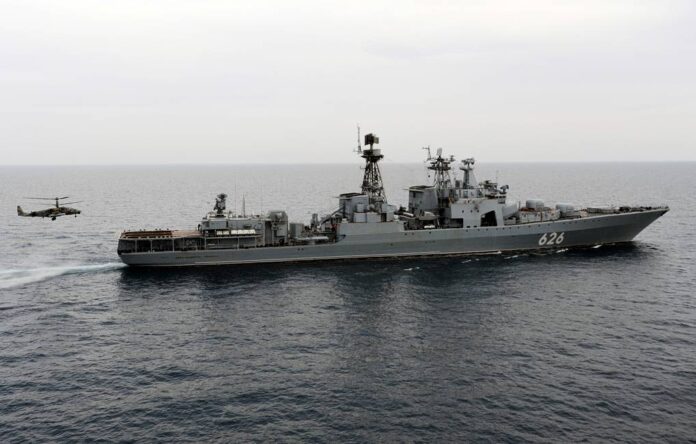 North Korea is Constructing a Massive Storage Compound for the Assembly...

US regime preparing to sanction India over S-400 Purchase