An official investigation is reportedly underway after the Russian military’s Guard of Honor took part in the wedding of a descendant of the country’s former royals, drawing their sabers outside the cathedral in St.Petersburg.

Moscow’s Regnum news site reported that officials in Russia’s second city had begun looking into the presence of one of the detachments of the country’s military at the first Romanov wedding, inside the country, for over 100 years.

Photos of the event show military personnel standing to attention inside the venue with guests of the newlyweds, Grand Duke George Romanov and his Italian spouse Victoria Bettarini, snapping shots of the active servicemen.

Another photograph from the elaborate ceremony shows the soldiers making a tunnel over the married couple with their swords held high above them as they exit.

Hundreds of attendees from Russia and overseas came to witness the extravagant two-day affair, which took place just over a century after the groom’s relatives, Tsar Nicholas II and his family, were killed by a Bolshevik firing squad in Ekaterinburg, effectively marking the end of the 300-year-old Romanov dynasty. 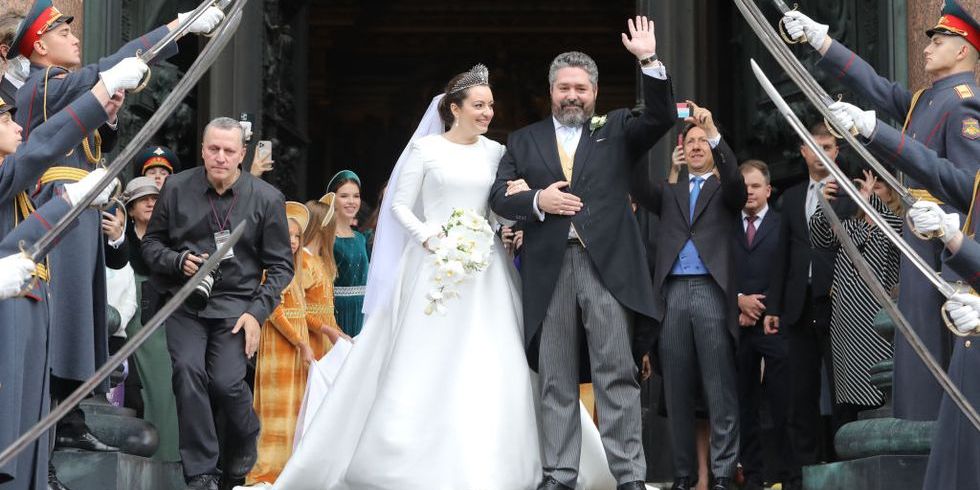 According to the Western Military District’s press service, the separate rifle company of the Guard of Honor is intended for the welcoming and departure of members of state, government and the military, as well as city-wide events.

The military commandant’s office in St. Petersburg has declined to comment on the presence of the Guard of Honor at the wedding, Russian news site Znak reports.

Quite a Remarkable Ceremony for Russian Orthodox Christians on the whole, should of had the Entire Military, Navy and AeroSupremo ‘SpaceForces’ take part in it, as it’s Simply ‘None’ of those Whining ‘JewishCunts’ business”

Zionist kingdom munching on its last days on planet Earth?

You anti-Jewish rants are pathetic. Nostalgic of the empire are nostalgic of what exactly? Serfdom and military defeats? If it was not for the Soviets, Russia today would be a sliced cake with Germans in the West and Japanese in the East.

In Greece for example. Jews alone had more schools than the rest of the country together. Start educating yourself instead of crying for a Jewish evil scheme against the planet.

I think Varkov more than redeems himself with knowledge, intelligence and creativity. As for your Jewish Kagal schools… are you sure you want to talk about that? They were really Madrassas which taught bigotry and, in the Talmudic case, Black Magic.

Educate yourself first. The Controversy of Zion is a plague hitting planet Earth over and over again.

But this century long hegemony is coming to a sudden end?

How about that Biden Mafia! They managed to not get mentioned once.

That is how mafia works, omerta …

Educating is the rights word here?