Russian President Vladimir Putin has said he will request talks with NATO to ensure that the US-led military bloc does not creep closer to his country’s borders, as Kiev moves to allow Western military into Ukraine.

Putin said that his country will insist on guarantees being set out to exclude the possibility of NATO moving any further to the east, and deploying threatening weapons close to Russian territory. 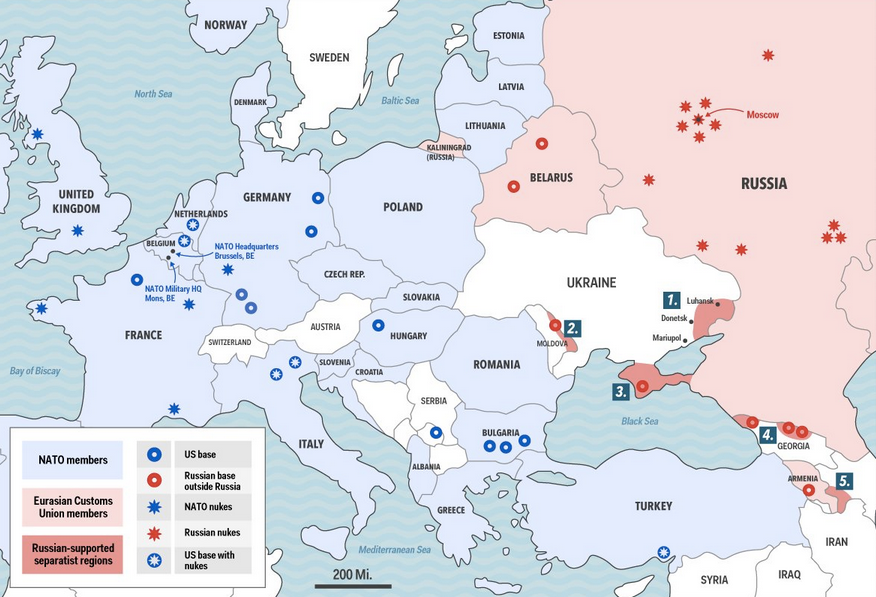 Everyone knows they made promises they wouldn’t expand eastwards, but then they did the opposite. Legitimate Russian security concerns have been ignored and continue to be ignored.

Putin insisted that the threat at our Western borders is really growing, and we have repeatedly talked about it. It is enough to see how close NATO’s military infrastructure has advanced to the Russian borders. It’s more than serious for us.

Putin’s remarks come amid heightened tensions between the US-led military bloc and Russia over its increased presence in Eastern Europe.

Moscow revealed that significant units and armaments from NATO countries, including American and British, are being moved closer to the Russian borders.

NATO’s chief Jens Stoltenberg said that the bloc had beefed up the size of its forces threefold and upped its presence in both the Black Sea and Baltic Sea to counter Russia’s presence.

Ukraine has now stationed well over 100,000 troops and large quantities of hardware in the war-torn Donbass region, pulling heavy equipment and personnel, which is half of the entire composition of the Armed Forces of Ukraine.

A US Navy-guided missile destroyer the ‘Arleigh Burke’ was deployed to the Black Sea last week not long after two other American warships sailed through the same waters.

In 2017, a tranche of documents was declassified, and widely interpreted as showing that American, British, and German officials gave assurances to the Kremlin in the 1990’s.

The documents show that NATO would not push into Eastern European nations, before invading and occupying Baltic countries like Poland, Lithuania, Latvia and Estonia.

Correct. Russia is in defense mode. It is Kiev who are on the offensive. If Russia opted to reverse roles (which it doesn’t) there would be no Kiev remaining. It’s to bad that the Donbass Region couldn’t have shared the same fate as Crimea.

Russia mostly produces defensive weapons to keep NATO from their doorstep, while evil hostile US Defense Industry makes offensive weapons to use for attacking other countries like China, Iran. Syria, Iraq, Libya and Russia.

If Russia doesn’t take it responsibility, it will the end of it reputation after the failures that conduct Westerners to make war in Libya, Iraq, Afghanistan, and Syria.

They are heading straight for the cliff, that is why they react so frustrated, threatening other in exchange for money and minerals?

Zionists better hurry with WW3, the fall of Zionism is inevitable and would be fantastic. Moloch will get no more child sacrifices.

Indeed, time’s up after some bloody 80 years of conduct.

Sanctions are acts of war.

This will provoke the total destruction of the continental USA and all NATO countries in less than 30 minutes. Any who think otherwise are brain dead.

I feel reasonably assured that if Russia and Ukraine engage militarily, natural gas exports from Russia to Ukraine and Europe will be halted.

Such a move would collapse European financial markets.The next time Nuland should feel the urge, she ought to place a cookie or sandwich there.

That is what Europe is heading for, carrying the illusion that soon Russia will be invaded for the West to control their minerals, gas and oil supplies??