Kazakhstan was overwhelmed by street demonstrations last week over the overnight doubling of gas prices.

The protest rapidly turned deadly in some areas, with the government reporting incidents of extreme violence against law enforcement – including at least two be-headings. Authorities estimate at least 164 people have been killed to date.

Participants in riots across Kazakhstan have acted in a highly organized manner, demonstrating a level of skill and discipline in their actions, acting Internal Affairs minister Yerlan Turgumbayev has said.

Across the board, protesters demonstrated their professional skills. Discipline and orderliness were notable in their actions.

In the areas where they were situated and before attacks, street video surveillance cameras were disabled. Roadways were barricaded, observers were stationed along the perimeter.

Turgumbayev noted that in the city of Almaty – the former capital city and one of the epicenters of the violence, rioters enjoyed numerical superiority to law enforcement, and were better armed, in violence taking place 5 January, 2022.

Large groups of protesters in different parts of the city attacked patrol squads. They took control of seven gun shops and seized weapons and ammunition.

They seized public transport and municipal vehicles and used them to ram squads of law enforcement. They threw homemade incendiary mixtures and fired guns at police. They burned service vehicles, including fire engines.

The rioters also prevented ambulances from entering the conflict zone and evacuating the injured. A highly organized group of about 20,000 people concentrated in the center of Almaty in an attempt to take control of the city administration building.

During the course of the chaos, police, and military cadets stationed in the area suffered beatings and humiliation and were stripped of their special equipment and uniforms, and the administration building itself set on fire. Rioters were then said to use these uniforms to commit illegal acts.

The minister also pointed to failed attempts by rioters in the cities of Taras and Taldykorgan to seize control of jails, and attacks on police stations and military outposts in Almaty and other cities in a bid to take control of weapons caches and military equipment.

Turgumbayev reported that 16 members of law enforcement have been killed to date and that over 1,300 have been injured.

Over 400 vehicles, including 346 police vehicles, have been destroyed, with over 100 stores and banks suffering damages of over 87 billion tenge (about $200 million).

As of this time, he said, 125 pretrial investigations have been opened for various suspected crimes, including attacks on law enforcement and property.

Roughly 300 people are also being held after attempting to flee the country on foot or by vehicle, among them individuals armed with weapons of various calibers, large numbers of cellphones, high-value items, and cash in local and foreign currencies.

The official reported that as of this moment, the situation has been stabilized across all regions, with administration buildings freed of rioters and utilities and other services being restored.

The state of emergency introduced by President Kassym-Jomart Tokayev on Wednesday will remain in place until 19 January, 2022.

The Central Asian nation of Kazakhstan was overcome with mass unrest shortly after New Year’s Day, after residents of the cities of Zhanaozen and Aktau in the country’s west took to the streets to protest.

The protests were against a twofold increase in prices for liquefied gas, corruption, Covid-19 related restrictions and other grievances. The terrorist style protests soon spread to other cities, including the former capital of Almaty.

President Kassym-Jomart Tokayev responded to the crisis by dismissing the government, taking up the post of head of the Security Council from former president Nursultan Nazarbayev, and promising to take account of all the legitimate requests and demands of the protesters.

On 5 January, Tokayev called on Kazakhstan’s allies in the Collective Security Treaty Organization alliance to send forces to assist in overcoming the terrorist threat posed to his country by organized rioters and terrorists with suspected foreign backing.

Around 3,000 Russian troops arrived in the country on 6 January, with Belarus, Armenia, Kyrgyzstan, and Tajikistan also sending forces.

These peace forces’ primary mission is to ensure security at major government and military facilities across Kazakhstan, but not engage in law enforcement operations against protesters directly.

On 7 January, Tokayev warned that any rioters, including the suspected foreigners among their ranks, would be neutralized if they did not lay down their arms and surrender to the authorities.

The Russian Ambassador to the USA, Anatoly Antonov told US media that Russia sees the situation in Kazakhstan as an attempt by external forces to undermine the security and integrity of the Central Asian country.

Kill all those criminals right now.

25% of them have been arrested.

They will be in New York, as well as all of America and its cabal partners … they eventually go back home with their insane lust to kill and create insurrection…. the very heart of Americas character is wicked to the core! 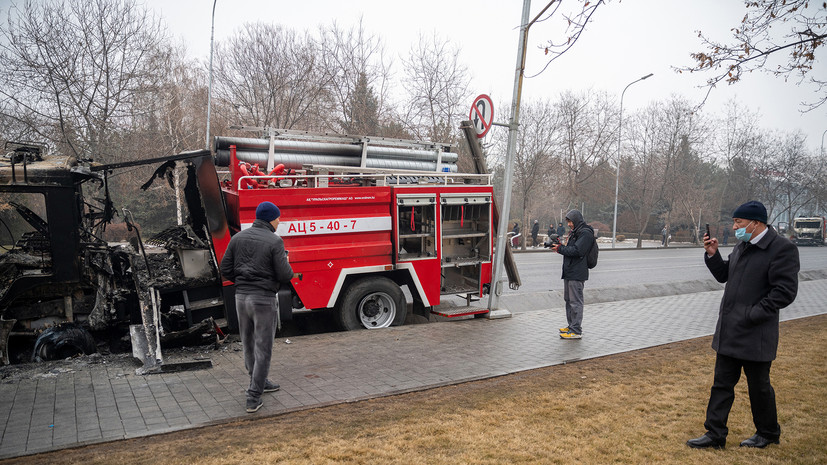 The most evil empire in history?

Lets hope they are not evil in disguise like the criminal white hats!…

No white hats here, but the same evil formula in disguise?

IMO this is preparation for the establishment of a new NATO launch pad for American and other Western forces forces from which to operate against the Motherland.

Any and all of the staff of the 38,000 foreign NGO’s and their locally-hired employees should be detained in a specific single-area compound and subjected to in-depth interrogation, subject to immediate and permanent ejection from Kazhakstan if anything about them seems the least bit flakey. If there were only one person in every foreign NGO, that is almost two military divisions of foreign-based potential Maidan-style Brennan-trained agent provocateurs. What if there were similar foreign NGO’s in New York state conducting their affairs in Albany as these foreign agents conducted their affairs in Almaty? All these provocateurs would be “disappeared” by… Read more »

US Nuclear Submarine bumps into seabed in South China Sea