A huge quarter-mile-long container ship that’s currently blocking the Suez Canal traced a distinctly phallic route in the hours before being blown off course by high winds and becoming totally stuck on Tuesday morning.

The massive cargo ship has turned sideways in Egypt’s Suez Canal, blocking traffic in a crucial East-West waterway for global shipping, according to satellite data Wednesday.

Traffic on the narrow waterway dividing continental Africa from the Sinai Peninsula stopped Tuesday after the MV Ever Given, a Panama-flagged container ship with an owner listed in Japan, got stuck.

It wasn’t immediately clear what caused the Ever Given to turn sideways in the canal. GAC, a global shipping and logistics company, described the Ever Given as suffering “a blackout while transiting in a northerly direction.

The Ever Given’s bow was touching the canal’s eastern wall, while its stern looked lodged against its western wall, according to satellite data from MarineTraffic.com. Several tug boats surrounded the ship, likely attempting to push it the right way.

Canal authorities could not be immediately reached early Wednesday. The ship appeared to be stuck some 3.7 miles north of the southerly mouth of the canal near the city of Suez.

Cargo ships and oil tankers appeared to be lining up at the southern end of the Suez Canal, waiting to be able to pass through the waterway to the Mediterranean Sea, according to MarineTraffic data.

A United Nations database listed the Ever Gren as being owned by Shoei Kisen KK, a ship-leasing firm based in Imabari, Japan. The ship had listed its destination as Rotterdam in the Netherlands prior to getting stuck in the canal. 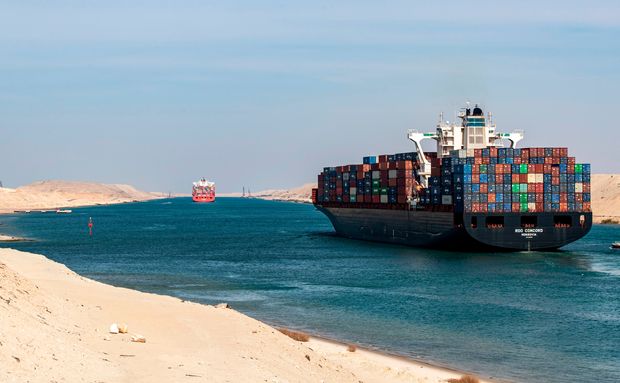 Opened in 1869, the Suez Canal provides a crucial link for oil, natural gas and cargo being shipping from East to West. Around 10% of the world’s trade flows through the waterway and it remains one of Egypt’s top foreign currency earners.

In 2015, the government of President Abdel-Fattah el-Sissi completed a major expansion of the canal, allowing it to accommodate the world’s largest vessels.

The MV Ever Given was stranded after losing the ability to steer amid high winds and dust storm in the Suez Canal on March 23, 2021. If Iran wants to start a counter offensive now, NATO will not be able to provide supply lines anymore.

Together we Stand
Guest

Suez Traffic Jam will continue for days as authorities having trouble with releasing the ship from its stuck position along the banks of the Canal.

baronmaya
Author
Reply to  Together we Stand

Amazing job, now get those children out of the smuggled containers before they all suffocate and die?

The Captain was in full control of the vessel, except for spinning out of control?

Shipping news outlet Lloyd’s List estimated that the Ever Given is holding up a whopping $400 million an hour, with over $9.5 billion in goods passing through the canal on a daily basis.

A couple of million per minute, makes me wonder?