The Italian ambassador Italy’s to the Democratic Republic of Congo has been killed in an attack in the eastern part of the former Belgian colony. Luca Attanasio, 43, died in hospital after the United Nations convoy he was traveling in came under fire near Goma.

The convoy reportedly belonged to the UN’s World Food Programme (WFP). An Italian military police officer traveling with the envoy as bodyguard and a Congolese driver were also killed during the incident.

The attack happened in the North Kivu province and is believed to have been an attempted kidnapping, according to officials at the nearby Virunga National Park.

Mr Attanasio was a passenger in one of two vehicles traveling about 15 km (nine miles) north of Goma when the attack happened on Monday morning.

The vehicles were “ambushed by a group of six attackers, who fired warning shots before taking all the passengers into the Virunga National Park”, the governor of North Kivu province, Carly Nzanzu, told the BBC.

A patrol of Virunga National Park rangers intervened and managed to free four people. Before the attackers ran away, the assailants shot the ambassador and his bodyguard, after they killed the Congolese driver at the start of the attack.

Beside the Italian diplomat, the two other fatalities were military police officer Vittorio Iacovacci, 30, who had been serving at the embassy since last September, and their Congolese driver, who has been named as Moustapha Milambo in media reports.

It is not clear who was behind the attack, but the interior ministry has accused a Hutu rebel group known as the Democratic Forces for the Liberation of Rwanda (FDLR). Millions of people have been killed during the genocide and up-rise against colonial representatives. 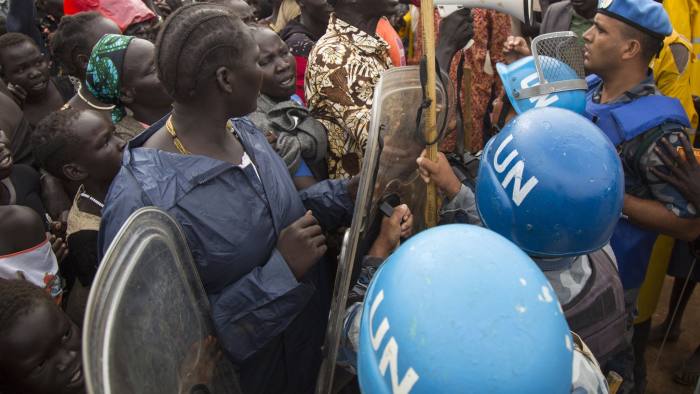 Many armed groups are known to operate in and around the park and militias clash regularly in the east of the country, where a large UN occupation force is struggling to keep the peace.

Mr Attanasio is the first ambassador to be killed in the country since French ambassador Philippe Bernard was shot dead during riots in the capital, Kinshasa, in 1997.

Many local armed groups – as well as those from Rwanda, Burundi, the Central African Republic (CAR) and Uganda – have established themselves in the region over the last 25 years.

The attack highlights the fact that stability to the region will return only if a solution is found to political issues in all these former colonial countries. But, today Italy mourns the loss of two of its sons and embraces their families.

Mr Attanasio had represented Italy in the DR Congo since 2017. He joined the diplomatic service in 2003 and spent time in Morocco and Nigeria.

The DR Congo was for many years at the centre of a brutal civil war that involved several neighboring countries. The conflict led to the loss of some five million lives between 1994 and 2003, with some observers branding it Africa’s Great War.

The worst genocide in Congolese history was executed by Belgium King Leopold during the colonization of the African rain forest country.

He brutally killed over 10 million Congolese people during the African Holocaust.

But no news agency or media outlet seems to be interested in these stories, unless if it is about Jews?

From 1885-1908, the Congo Free State under the personal rule of King Leopold II was living hell.

USA-China Trade War targeting Welfare of Consumers on both sides

Thailand will give away One Million Cannabis Plants