So European public opinion is squarely at odds with NATO’s role in America’s war plans. Many Europeans now recognize that NATO’s including the United States of America is toxic to their own nation’s security because the U.S. Government is addicted to war.

The sole way forward for Europeans is to end that military NATO war alliance, as fast as possible. NATO should have been dissolved @ the same time the Warsaw Pact was ended. But instead the war party invaded and took over the territory of Eastern Europe.

The US nuclear forces modernization program has been portrayed to the public as an effort to ensure the reliability and safety of warheads in the US nuclear arsenal, rather than to enhance their military capabilities.

In reality, however, that program has implemented revolutionary new technologies that will vastly increase the targeting capability of the US ballistic missile arsenal.

This increase in capability is astonishing, boosting the overall killing power of existing US ballistic missile forces by a factor of roughly three, and it creates exactly what one would expect to see, if a nuclear-armed state were planning to have the capacity to fight and win a nuclear war by disarming enemies with a surprise first strike.

Victory in any nuclear war will be impossible, because it would result in both sides being effectively eliminated. America’s unofficial change to nuclear forces for a blitz first-strike against Russia, so as to prevent retaliation by Russia.

It was a two-step process, and not only has every American President this century participated in this monstrosity, but NATO has participated 100% in it, while this secret plan of the US Cold War continued after Russia ended its side of the cold war in 1991, to now be heading for The Kill.

NATO now is even trying to extend to operations in Iraq, Afghanistan, Syria, Yemen, Somalia, Ethiopia and other nations that the U.S. regime already militarily occupies.

On February 24th, NATO headlined “NATO Mission in Iraq” and reported based only upon Iraq’s having requested and received in October 2018 additional training so as to replace ISIS.

That NATO report ignored the demand by Iraq’s Government in January 2020 for all U.S. troops to leave Iraq immediately and the millions of Iraqis who subsequently demonstrated against the U.S. and demanded the U.S. to leave immediately!

The pretense that the US military defended itself by carrying out last week’s airstrikes also necessitates glossing over the fact that the country Washington actually bombed, Syria, is accused of neither sponsoring nor carrying out the rocket attacks on American bases in Iraq that should not be there in the first place! 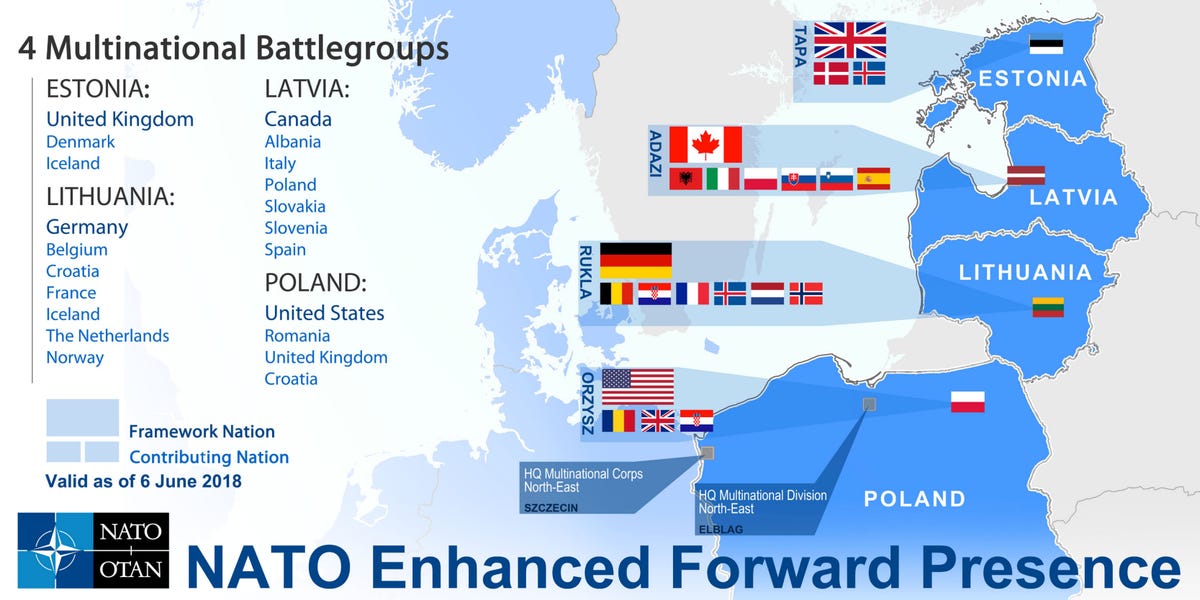 All of the empire’s mainstream media present the pro-empire views and constantly lie, even to disappear events that they themselves had previously reported.

If Europeans are going to fight and die for their own aristocracy, that’s bad enough, but to do it for America’s lying aristocracy — the billionaires who control U.S.-based international corporations — is even worse.

NATO must end now, not only because it’s a real and present danger of WW III, but because it’s a U.S. mega-corporate and allied scam, which destroys countries, even if it won’t end the world. To accept NATO is to accept evil.

If Russia hadn’t inherited the nuclear weapons that the USSR had produced, then maybe the U.S. regime would already have taken over in Russia.

The U.S. Army’s plan for an invasion of Russia, which is euphemistically called “The U.S. Army in Multi-Domain Operations.

This evil hostile plan begins with missile and artillery bombardments of Russian command centers and defensive forces, followed by an invasion by armored forces to occupy key areas and sites until Russia surrenders.

Unsurprisingly, Russia’s defense strategy in the face of such an existential threat would not be to surrender, but to retaliate against the United States and its allies with nuclear weapons.

Many Europeans now recognize that NATO and the United States of America are toxic to their own nation’s security because the U.S. Government is addicted to war and conquest that has nothing whatsoever to do with defense but is purely aggressive in its intent and reality.

U.S. war plans for an assault on China are similar, involving missiles fired from ships and bases in the Pacific.

China has not been as public about its defense plans, but if its existence and independence were threatened, it too would probably use nuclear weapons, as indeed the United States would if the positions were reversed.

But they’re not—since no other country has the offensive war machine it would need to invade the Zionist controlled US regime.

The only real terrorist nation on the planet has been fighting lucrative wars since the refugee Europeans invaded the Land of Opportunity, killing most Indians to glorify the confiscated occasion?

Invasive genes it the blood of the rulers?

South African riots worst since the fall of Apartheid regime in...