More than 300,000 people have been displaced and at least 31 were killed as Typhoon Rai tore through the Philippines. It was the archipelago’s 15th and strongest major storm this year.

The tropical storm, named Rai internationally but named Odette locally, gathered over the Philippines this week, later than most typhoons which typically develop between July and October.

It intensified rapidly on Thursday and was classified as a super typhoon, and a category 5 storm, the highest level. In the worst affected regions, the monster storm caused utter destruction.

With winds reaching 195 km p/h (121 mph), it ripped off roofs and uprooted trees, creating widespread destruction in its path and leaving houses and swathes of rice fields submerged.

At least 31 people were killed, the country’s disaster agency said on Saturday. Most of the fatalities reported were due to falling trees or drowning. Officials said the death toll was preliminary and might rise, as more information from provincial units is yet to come.

The typhoon ravaged the southern and central regions of the island country, also hitting popular tourist destinations, including Siargao and Cebu.

More than 300,000 people fled their homes and beachfront resorts. Dozens of flights were canceled, leaving about 4,000 people stranded.

A local official in the Dinagat Islands said everything was destroyed, including evacuation centers, and residents have nowhere to seek refuge.

President Rodrigo Duterte announced he would visit the hardest-hit areas on Saturday, saying he doesn’t worry so much about damage to structures, but fears if many people died.

After leaving the Philippines on Saturday, forecasters say Rai will emerge over the South China Sea and head towards Vietnam.

The Philippines needs our prayers. God bless the resilient people there.

Invasion of the Punk
Member
Reply to  Prins Wasabi 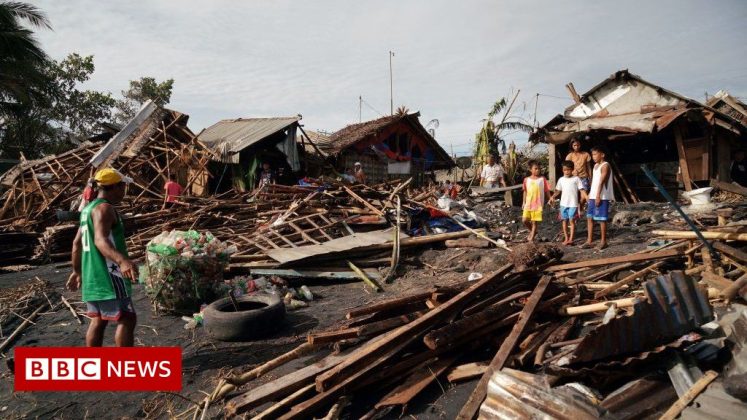 Somebody knows what actually caused it.

Invasion of the Punk
Member

Mindless Biden plans to declare Victory if Media declares him to...