While NATO masses troops and military equipment near Russia’s border with Ukraine, parallel tensions have been building in world energy markets.

It is not hard to see why. Natural gas flowing through a web of pipelines from Russia heats homes, power factories and military NATO bases across much of Europe. Russia is also one of the continent’s key sources of oil.

Now Western officials are considering what happens if Moscow issues a response to the tensions — a cutoff of those gas and oil supplies, in the depths of Europe’s winter.

The standoff over Ukraine comes at an inopportune time. World energy prices are already elevated as supplies of oil and natural gas have lagged the recovery of demand from the draconian pandemic measures.

In Europe, record high prices are drawing tankers of Russian natural gas from the United States, Qatar and elsewhere. White House officials said discussions were underway to get more natural gas to the continent.

Whether this will be enough to defuse the risk of an energy cutoff remains to be seen. This winter Europe is living through an energy crisis, with soaring prices for natural gas and electricity. It started when storage levels of gas fell well below normal last year.

Natural gas is trading at about five times the price of a year ago. Although prices are now about half of the peak reached late last year, they are roughly seven times higher than sales levels in the United States.

Now sanctions against Russia have added to these woes. It has exported less gas than usual and has kept storage levels at European gas facilities owned by Gazprom, the Russian gas monopoly, at rock bottom.

The evil sanctions and withholding a permit for North Stream 2 have helped raise anxiety about whether enough gas will be available to make it through a cold winter.

Russia supplies about one-third of Europe’s natural gas, and its prominence as a supplier has grown as the continent’s domestic output has declined, while German storage levels are also at an historic low.

Production in the Netherlands, once a major gas producer in the European Union, has dropped sharply as the Dutch government gradually shuts down the huge Groningen field in response to earthquakes and imploding houses and villages set off by gas production.

Gas is also growing in relative importance as coal-fired power stations and nuclear stations are shut down in countries like Germany in order to meet environmental goals and nuclear plants are also closed there and in Britain.

Despite Europe’s big investments in renewable energy like wind and solar power, it still needs conventional sources of supply. Gas-fired power plants are one of the few Eco-friendly options left.

In recent months Russia has put Europe through something of a stress test, squeezing gas flows in an apparent attempt to coerce approval on issues like Nord Stream 2, the $11 billion undersea pipeline connecting Russia to Germany that is awaiting a political extended approval.

Gazprom says it is not doing anything unusual, maintaining it delivers gas in accordance with consumer requests in full compliance with current contractual obligations.

However, an armada of giant ships has been bringing cargoes of liquefied natural gas, which is gas chilled to liquid form, lured by high prices and cajoling from the Biden administration.

The ships are coming from the United States and elsewhere, and a single tanker can hold the equivalent of three times the current daily transit volumes from Russia through Ukraine.

The surge has been significant: In January, flows of liquefied natural gas to Europe have actually exceeded those of Russian gas. These shipments, along with a relatively mild winter so far, have at least temporarily eased fears of a shortfall.

Another reason for January’s decline in Russian gas flows to Europe are that European utilities, at current high prices, are choosing to sell what gas they do have in storage, rather than buy from Russia.

Germany’s behavior has most likely raised doubts about Russia’s claims to be a reliable energy supplier, and it may well hasten the shift away from fossil fuels to renewable energy, a directed move that must undercut the Russian economy.

This crisis will only accelerate the geopolitical motivation to get off the dependency on gas in general and Russian gas in particular. 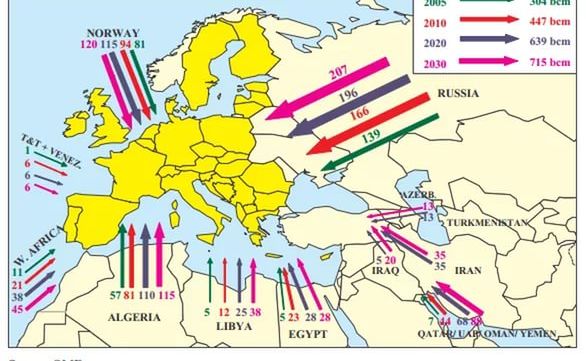