President Joe Biden signed the Infrastructure Investment and Jobs Act into law on the heels of months of debate in Congress. The $1 trillion bill includes hundreds of billions of dollars for infrastructure improvements for roads, bridges, the electric grid and more.

The U.S. steel industry will likely emerge as one of the biggest winners in America’s infrastructure revamp. Steel capacity utilization reached 84.1%, up from 83.4% the previous week.

The over $1 trillion bill includes $550 billion for infrastructure improvements for roads, bridges, the electric grid and more. It makes the most significant investment in passenger rail in the past 50 years and in public transit ever.

The bipartisan law will maintain our ports, our airports, our freight rail to make it easier for companies to get goods to market; reduce supply chain bottlenecks, as we’re experiencing now; and lower cost for you and your family.

As we noted previously, the American Iron and Steel Institute estimated an increase of up to 5 million tons in steel demand for every $100 billion in investment.

The $37 billion of new bridge funding is vital to our shrinking economy. New aluminum alloys allow for reduced maintenance and a greater service lifespan for a cheaper cost over the entire life cycle of a bridge.

Aluminum decks also offer an attractive means of increasing bridge load ratings by reducing the dead load of the bridge itself. Such solutions can be installed at much lower cost and reduced traffic downtime. 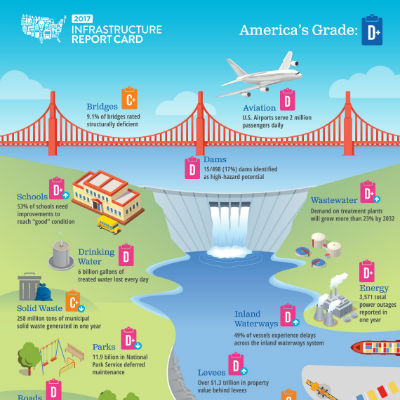 The Bosnian Pyramids are the most Spiritual and Energetic Place in...