Syrian President Bashar Assad has told RT that Damascus is still backing Russia’s military operation in Ukraine both out of loyalty and commitment to an international equilibrium.

Assad, whose country has weathered sanctions and a US military intervention, has accused Washington of using the dollar to commit robbery on a global scale.

We can view Russia from two perspectives, Assad told RT at the weekend. The first is that of an ally: If our ally triumphs in the battle, or if their political position is strengthened then this is a win for us as well.

From a second perspective, Russia’s power today constitutes a restoration, albeit partial, of an international equilibrium. This re-balance that we are witnessing will impact smaller countries, including Syria.

Assad has been a staunch ally of Putin since 2015, when Russia launched a military campaign in Syria that helped defeat Islamic State (IS, formerly ISIS) and the collection of militias and Western-backed terrorist groups opposing Assad’s government.

To the Syrian president, Russia’s current struggle with the West – described by Russian Foreign Minister Sergey Lavrov as a war by proxy – predates the First World War, and will continue as long as the US dollar remains the world’s reserve currency.

If the dollar continues to govern the world economy, nothing will change, regardless of the results of the war in Ukraine.

Using the dollar is not blackmail, it is robbery, claiming that the Nixon administration’s decision to decouple the dollar’s value from that of gold in the 1970’s made it a worthless piece of paper.

The United States still continues to trade around the world using this worthless piece of paper. This is robbery, and it applies to the whole world.

As long as the dollar is a global currency and continues to be settled through US banks or what is called the American Federal Reserve, you are under the authority of this dollar; and therefore your future as a state, a country or society, as an economy is under the mercy of the USA.

Yet amid the rise of China and Russia, the balance of power is shifting away from the USA.

Yes, we are under sanctions, but many of our basic needs are not bought from Western countries, we have severed our relations with them. Every country can now secure its basic livelihood and growth requirements without American permission.

Since Russia became the most-sanctioned country in the world history, trade between Moscow and those capitals refusing to join the West’s sanctions regime has flourished.

Ruble-yuan trade has soared over 1,000% in the past three months, while Russian oil exports to India have increased by 25 times between May 2021 and May 2022.

While Syria still has the means to provide its citizens with free but limited healthcare, education and subsidies, Assad’s government is struggling to rein in corruption and that after more than a decade of civil war, full-scale reconstruction requires investment.

There are companies from various Arab states which have expressed a desire to take part.

If we take into account the extreme pressure applied by the West through sanctions on any company that might invest in Syria, we recognize that the process will be slow and risky for many of them.

Nevertheless, there are those that are preparing to invest in Syria in ways which circumvent the sanctions.

Alongside the slow process of rebuilding, Assad visited the United Arab Emirates in March, marking his first trip to an Arab nation since Syria was suspended from the Arab League in 2011.

While the media described his visit as a return to the diplomatic arena, Assad disagrees. I don’t know what the word return means, because we never left.

Syria has remained in its place, with the same positions and the same conditions, dealing with them in its own way. Like Iran supplying oil to Syria against the unilateral US embargo.

Even the Arab states that withdrew their diplomatic missions maintained the relationship and kept positive feelings towards Syria despite not being able to do anything.

Moving into the future, Assad said that Syria will eventually reclaim its oil resources – currently held by Kurdish armed militias with the backing of the US military support.

Damascus will not hesitate to defend Syria’s territorial integrity amid Turkish threats to enter the country and create a security zone along the Turkey-Syria border.

Diplomatically, Assad said Syria will talk with any of its Arab neighbors, and will maintain its close relationship with Iran, regardless of external pressure.

Syria’s relations with any country are not subject to discussion with anyone. No one decides for Syria with whom it can and cannot have relations.

Unlike other Arab U.S. stooges, President Bashar al-Assad is a courageous leader. The USA is illegally occupying Syrian territory and stealing its vital resources, including grain and oil.

I would stick to Russia too if I was a president as well. It is unfortunate that most of the world leaders to see the urgency of having a global presence like Russia and China that can put America in check. The greed that drives American democracy and capitalism is a monster of epic proportions and without a counter power that can put America in check the world is in a different kind of trouble. Assad points this out in an interesting way “As long as the dollar is a global currency and continues to be settled through US banks… Read more »

Why do these Americans occupy other counties? It’s because they don’t have one of their own! 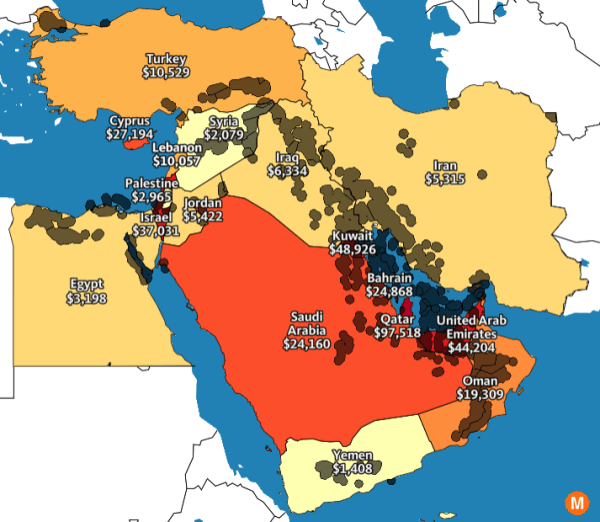 President Assad , departing from the “usual ” wording of politicians, has explained the reasons for supporting Russia’s position in Ukraine. Well done Syria.

Missiles fired @ US Base in Northern Iraq

The Great Financial War between Bitcoin and Global Central Banks